Manchester City Centre is a complete mess as far as cycling is concerned: there is a small 20mph zone which does not cover any of the main cycle routes; there are far too may one way streets forcing people to make long detours or cycle on pavements or the wrong way down one way streets.

Think for a moment about a person arriving at Piccadilly station with a bicycle. How would they cycle to a location such as the M&S store in St Mary's Gate? The journey on a pedal cycle is at least three times as long as the journey on foot, possibly five times as long, unless they get off and walk. The city centre needs a major overhaul to make radical improvements for cycling. The whole area enclosed by the ring road must be made a 20mph zone as soon as possible, and all one way streets in the centre should allow two way cycling. This has already been achieved in Bristol. 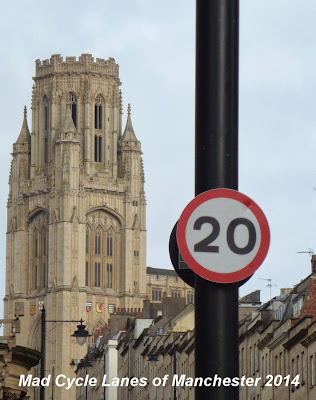 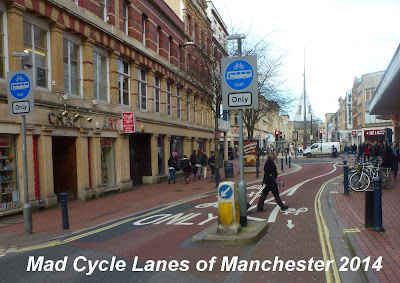 Further measure are also needed to enable cycle access to the major retail centres by bike and good safe sheltered cycle parking needs to be provides throughout the area, and especially at all the main attractions. These measures should also include a city centre wide HGV ban to improve safety for people who walk and cycle and to encourage delivery of goods by smaller, safer motor vehicles and by cycle couriers and cargo bikes. 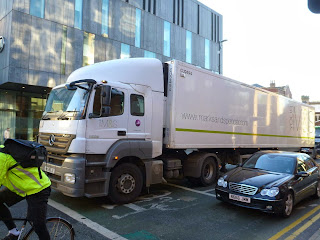 However, this is not enough to deal with major problems such as Deansgate, where cycling is on the decline because of the dangerous road structures installed only a few years ago. Deansgate is one of the key public spaces in Manchester. It is closed to enable the construction of a running track every year and is closed for many of the city's parades and other events. As a road it serves little or no purpose as a transport link for motor vehicles, but as a public space it is vital to the city. Deansgate should be permanently closed to through motor traffic and should be re-engineered to give safe public space for people to walk and cycle and enjoy the city without traffic.

Most of the proposals in this consultation are of very poor quality and will make little or no impact on cycle convenience and safety. Indeed several of them are of such poor quality that they will make cycling more dangerous. Manchester City Centre needs a new transport plan which will create a comprehensive approach to providing safe and convenient access to the city centre by bicycle. We need a new centre wide transport plan, not piecemeal schemes like these which are discontinuous and as such, by and large useless.

Detailed comments on each of the plans follows.

Deansgate is a dreadful place to cycle. The construction of the build-outs has massively reduced the number of people cycling along Deansgate. It is now very dangerous, particularly the junction between Liverpool Road and Great Bridgewater Street. When cycling south along Deansgate, it is now almost suicidal to attempt to turn right into Liverpool Road, and almost as dangerous to go straight on when cycling north. 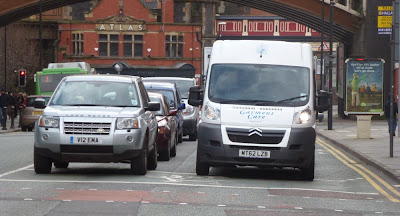 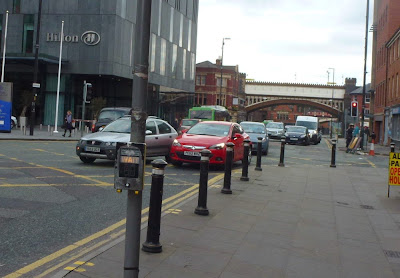 The proposed changes to Deansgate will do nothing to improve cycling safety of comfort along this road. I would go as far as to say that they are dangerous as they attempt to use cycle lanes as traffic management measures, putting people riding bikes in increased danger. 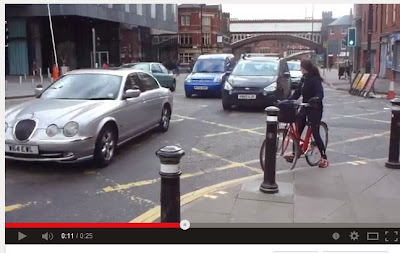 As a road Deansgate serves little or no purpose as a transport link for motor vehicles, but as a public space it is vital to the city. Deansgate should be permanently closed to through motor traffic and should be re-engineered to give safe public space for people to walk and cycle and enjoy the city without traffic. 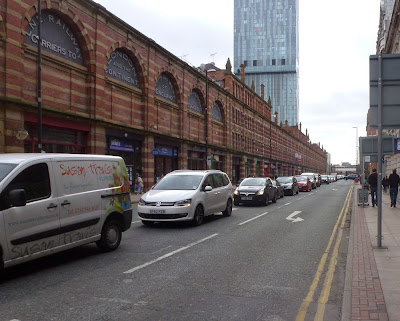 The entire road is badly managed and requires a complete re-engineering to turn it into shared public space. This is well beyond the scope of these works.

All the works on Deansgate need to be dropped from this scheme and plans put in place for a far more radical overhaul of the road and the complete removal of through traffic. Meantime all the current cycle markings should be renewed from the road maintenance budget.

Both these proposals are pointless. Neither of them are on any current cycle desire line and both are potentially dangerous without the removal of all the on-street parking and loading bays.

Whilst there is massive scope in the city centre for contraflow cycling on one way streets, these particular streets are of very low priority when compared to Princess Street, Nicholas Street, Charlotte Street and many many more main routes.

These works are a waste of money in isolation as well as being potentially dangerous and should be removed from the scheme.

This is currently the location of one of the city centre's most dreadful cycle lanes. It is one of the most idiotic designs I have ever seen. I understand from the comments on my blog post about it that it was designed to remove people cycling from the road to enable more lanes for motor traffic. 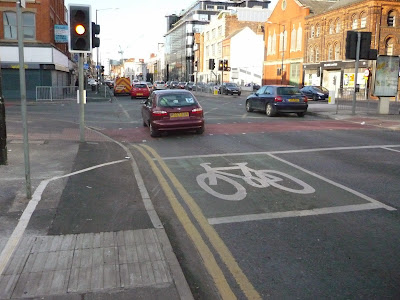 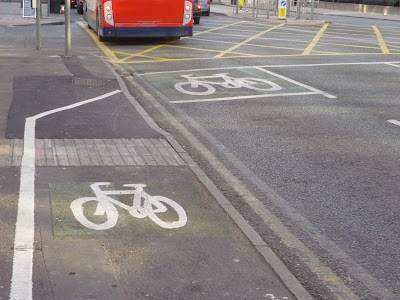 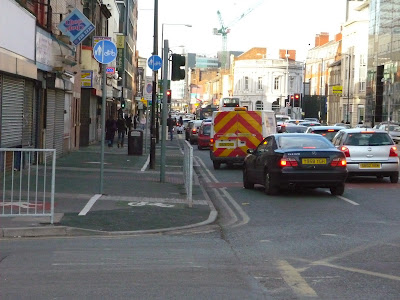 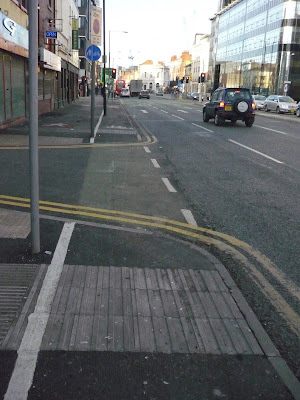 I have never, ever seen anyone use this cycle lane, everyone stays on the road because it is so dangerous.

There is no point putting in more dangerous cycle lanes like this.

The works in this area should be restricted to enabling access to and from Port Street and Redhill Street, i.e. installing only the two sections of pavement cycle lane marked as 2m width. These sections should be widened to 2.5 or 3m to allow for two way cycling.

According to the Manchester cycling map this road is NCN route 6, but this is not acknowledged on the plans. The proposals for this road are counterproductive. It is unacceptable and dangerous to install substandard 1.2 meter wide cycle lanes. It is even more dangerous to install them along the side of a layby without at least an extra 1m wide buffer for the door zone. This is a very wide road, and there is plenty of space for kerb-separated cycle tracks on both sides of the road.

In order to have an impact on this roadscape all the parking spaces need to be removed and segregated cycle lanes installed that are at least 2 meters wide. The layby would have to be removed and double yellow lines installed along the entire length of the road along with a loading ban. The lighting under the bridge also needs to be greatly improved.

The current proposals are dangerous and so works in this area should be postponed until sufficient funds are available to provide a safe segregated solution.

These proposals are pointless and should be dropped.

According to the Manchester cycling map this road is NCN route 6, but this is not acknowledged on the plans. Anyone who walks along Liverpool Road during rush hour will see drivers making use of the eastbound cycle lane to reach the Deansgate junction to go straight on or turn right, whilst a separate line of traffic queues to turn right. It is totally pointless installing cycle lanes that will end up being blocked by queuing traffic, or worse traffic accelerating to get through the junctions.

In order to have an impact on this roadscape all the car and coach parking spaces and parking bays need to be removed and segregated cycle lanes installed that are at least 2 meters wide. Double yellow lines also need to be installed along the entire length of the road along with a loading ban. The lighting needs to be improved. 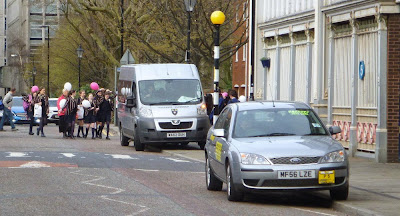 The proposals for Liverpool Road should be dropped pending funding to provide a more integrated solution to safety of people who are cycling and walking in this location and the removal of all through traffic from the area.

The proposals here do not include the cycle lane widths. I assume that the proposed cycle lane is only 1.5m wide and therefore inadequate. The proposal is also a non-mandatory cycle lane, so is totally pointless.

This proposal should be dropped, pending a more radical redesign of the area.

This is a very wide road with quite a steep slope. There is plenty of space for good quality 2m wide segregated cycle lanes on both sides of the road. This would have a significant impact on the use of this route if the junction with Great Ancoats Street were also totally re-engineered.

This proposal should be dropped, until money is available to install kerb separated cycle lanes and a major re-engineering of the Great Ancoats Street junction.

This is a worthwhile contraflow cycle route that needs redesigning properly.

The contraflow cycle lane should be at least 2m wide and marked throughout the length of Port Street.

Both sides of the road will need double yellow lines and a loading ban.

All the on-road parking places and loading bays need to be removed or relocated onto Hilton Street, with the exception of the bays adjacent to Faraday Street.

Further signage will be needed in Hilton Street to warn of two way cycling in Port Street.

This is a good proposal, poorly implemented. More money should be spent at this location ensuring that this is a high quality route.

A few token sections of green tarmac will only make this area worse.

Again this is a token treatment of an area that needs a more radical approach to have any positive impact.

Again, these proposals are simply tokenism and should be dropped pending a major overhaul of these areas.

Manchester City Centre needs a new transport plan which will create a comprehensive approach to providing safe and convenient access to the city centre by bicycle. We need a centre wide plan, not piecemeal schemes like these which are discontinuous and as such, by and large useless.

The approach needs to be City Centre wide, looking at how journeys by bike are facilitated through the city centre. As such there are a number of key barriers to cycling:-

Excessive traffic speed. The whole of the city centre should be a 20 mph zone, at least extending to the area enclosed by the ring road, but preferably including the inner ring road and beyond.

Excessive traffic levels. The current City Centre Transport Strategy determinedly maintains current traffic levels, despite all the money spent on public transport. A new strategy needs to reduce the amount of traffic entering the city centre to an absolute minimum to enhance the environment for economic and environmental growth and encouraging more people out of their cars and onto bicycles.

Pedestrian only areas. The pedestrianisation of parts of Manchester City Centre has become a major obstacle for pedal cycles. There needs to be a review of pedal cycle access to these areas.

The money in this scheme should be focused on one or two of these priorities and the construction of a comprehensive cycle plan for the city centre. It is no use putting in piecemeal cycle facilities. We need a major rethink of the city centre and how people access it by cycling.