On my way home from Chester recently I changed trains at Crewe. 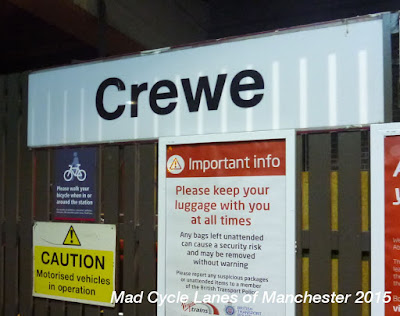 Whilst waiting for my connection I discovered that this station has plenty of cycle parking - on the platforms.

There is the usual disclaimer notice, 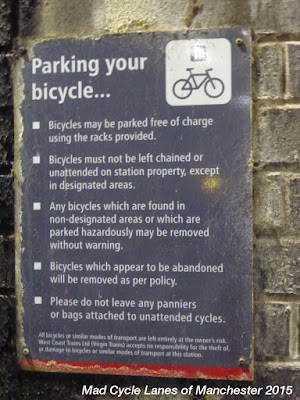 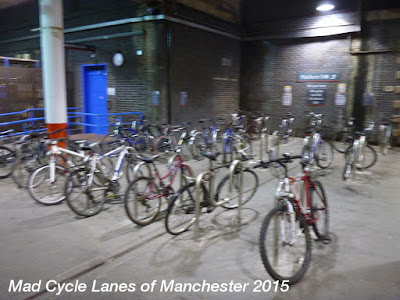 This cycle parking is provided on a number of platforms. 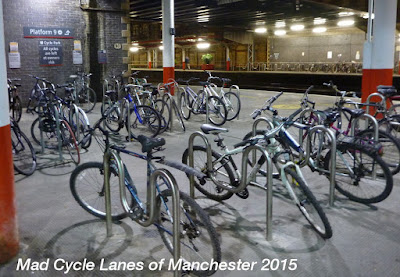 It is secure and under cover, 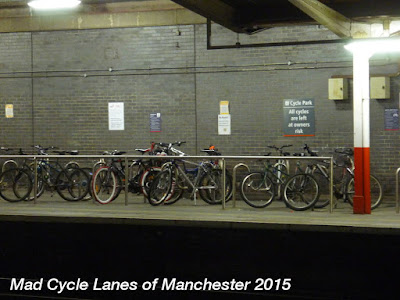 and for bonus points... 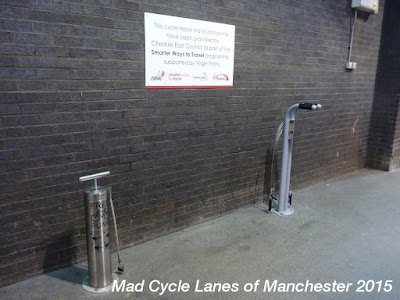 there is a pump 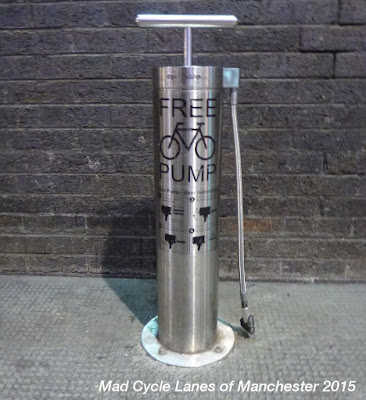 and a maintenance stand 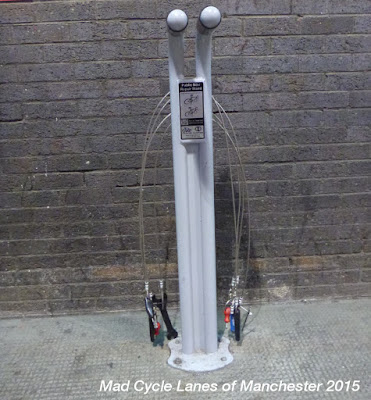 provided by the local council and Virgin trains. 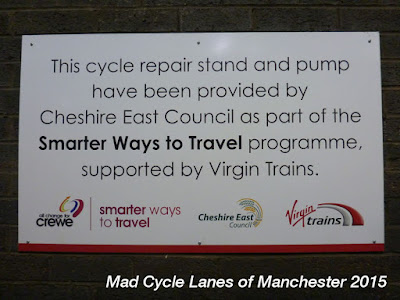 Sadly, such facilities are not provided at Manchester Piccadilly station. Here the attitude is totally different. 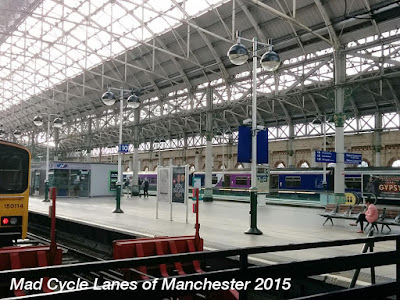 It is a response to this reply http://madcyclelanesofmanchester.blogspot.co.uk/2015/06/response-to-manchester-city-council.html


It is pure fail from Manchester City Council! 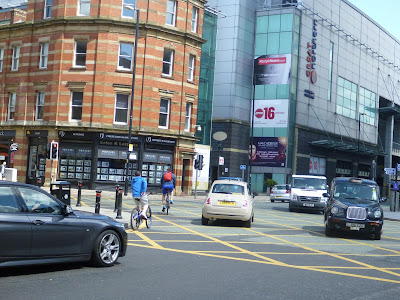 What is the point of consulting the public when you just respond with this???????

Following the consultation exercise relating to proposed alterations to the junction of Deansgate with, Liverpool Road and Great Bridgewater Street, your comments along with others provided on the proposals have been included within a report to the Citywide Highways Manager and Executive Member for the Environment for review.

After consideration of all comments received, it has been decided that the proposals are not implemented at this stage but that improved cycling provision along Deansgate is considered as part of the overall City Centre Cycling Strategy currently being developed, taking into account wider city centre issues raised during this consultation process.

Thank you for taking the time to respond with your views to this consultation information.

This route was, on the original plans quite a reasonable proposal. However, Manchester City Council are not acting reasonably on cycle provision at the moment, and this is a fine example of a reasonable idea being made into a real mess.

The idea is to take people cycling from the pedestrian crossing by the Rochdale Canal down Port Street into the city centre. A straightforward, mandatory contraflow cycle lane with protecting kerbs or islands would have done the trick... along with a sign saying except cycles below the No Entry sign. 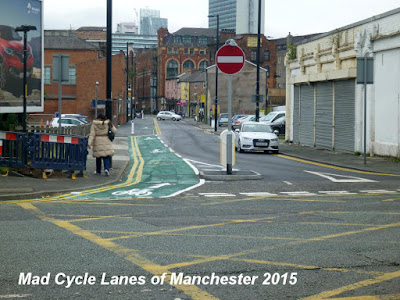 The first problem is that this is not a mandatory cycle lane. 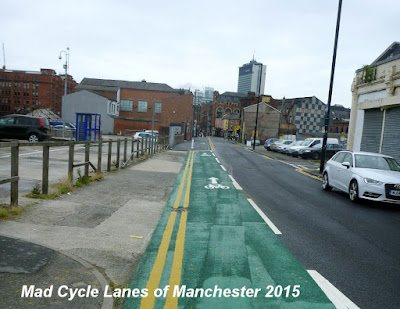 The second problem is that somebody made the stupid decision to widen the pavement. 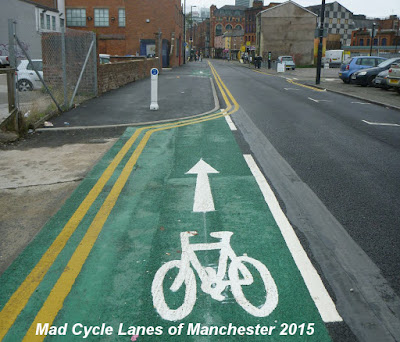 Now cycles are forced to give way at each side turning, 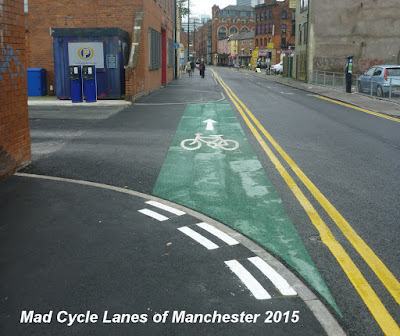 there are a series of kerbs to negotiate 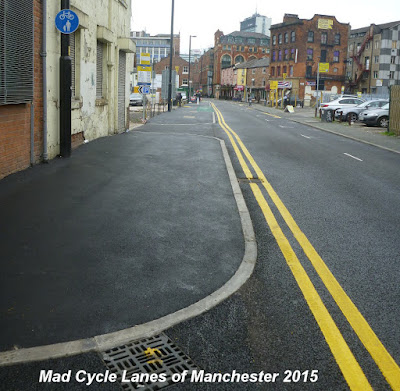 and pedestrians walking into the cycle route. 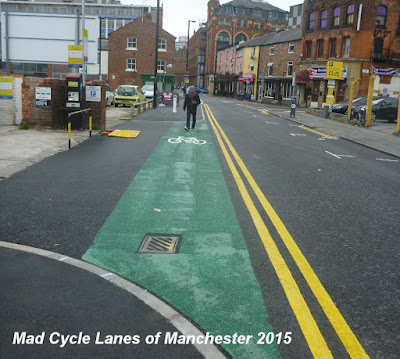 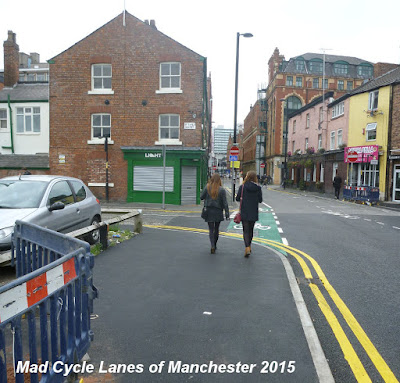 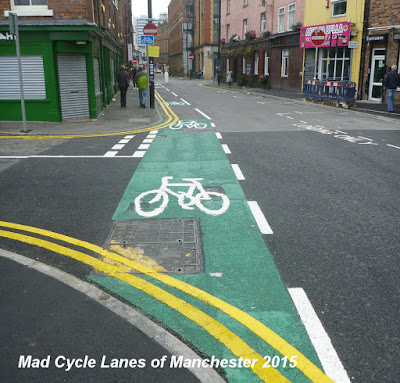 and again it is only an advisory cycle lane. 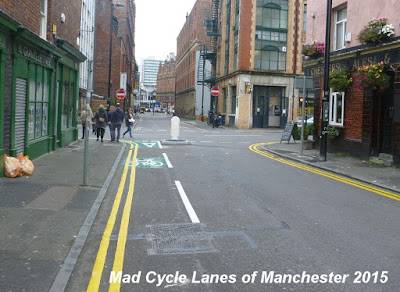 Perhaps the only thing they have got right are the bollards at either end... 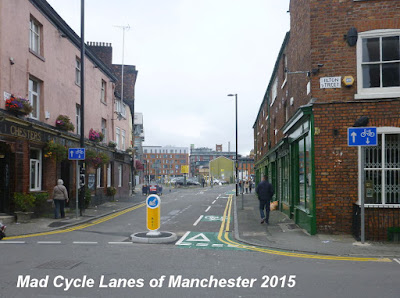 All in all this is a simple task to put in a contraflow cycle route that has been turned into an exercise in forcing people to cycle on the pavement. Or has money that was set aside for improving cycle routes been used to resurface a road and widen the pavement?