The problems with the lack of consultation with the public on the design of the new Metrolink lines has reached a crisis with the very poor quality designs that are potentially very dangerous for anyone on a bicycle.

Read the full analysis of the problems with the ‘cycling provision’ at the Southmoor Road / Altrincham Road junction in Wythenshawe on the Love Your Bike web site. 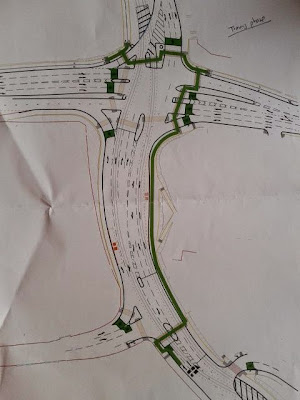 I support this statement, though I wish to see involvement going beyond just cycling organisations and include open involvement for members of the public in the same way as the cycle forum.

2) Also notes that many Manchester residents already use cycle routes through Trafford Park and to Media City and that funding has been secured to build the Trafford Park Metrolink line.

4) Calls on Transport for Greater Manchester, Metrolink and its project contractors to ensure that:

a) remedial measures are taken to improve the cycling infrastructure provision along existing Metrolink routes;

b) future Metrolink routes, such as Trafford Park, must be designed to meet the TfGM Cycle Design guidance which outlines the 5 key criteria “for successful and effective cycling infrastructure”, namely: safety, coherence, directness, attractiveness and comfort.

c) the cycling organisations in Greater Manchester are involved from the beginning of the design process.

This statement is supported by the organisations listed below:

[2] Is this Dangerous? (Eccles New Rd in Salford) Manchester Wheelers.

After some fuss trying to get the plans for the Trafford Park Metrolink out of TfGM I was sent an email containing a link to a complete set of plans online.

Why on earth TfGM didn't put a link on the notices I don't know, but there has been no publicity about these plans that I have seen beyond the paper notices.

There is good news and dreadful news on these plans.

The good news is the track alignment may have improved for cycling as most routes look like they will cross the track at right angles in more places.

The dreadful news is that most of the cycle routes will be closed for many months during construction work. For example, not only are the access paths being closed, this whole section of the towpath will be shut for the construction work.

The tram lines will smash their way through Sam Platts pub, and demolish the Wharfside Business Centre and the factory adjacent to Quay West. This is different from the original alignment in the consultation which would have run along the road. 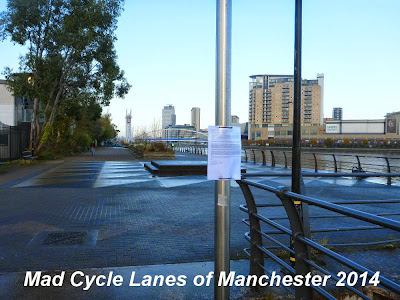 The consultations on Airport Cycleway and Prestwich Cycleway have now closed.

These poor quality proposals have been surveyed by Love Your Bike in detail and you can read their excellent report on their web site.

Two further consultations are open to the end of December, the Wilmslow Road Cycleway is another poor quality route and the Cheetham Hill Road Cycleway which is utter crap!

Now Manchester City Council is putting on 3 events at short notice where you can comment on the Wilmslow Road Cycleway - Didsbury - 9 December, Withington - 10 December and Fallowfield - 11 December.

More details on the web site.

It is beginning to feel like desperation on the part of the council as they begin to search for somebody to support their poor quality proposals.

However, there is something missing from these consultations - the section through Curry Mile. As far as we know this part of the route has been dropped, at least for now. This leaves a large gap in the south Manchester Route.

No sooner have TfGM closed the consultation on the Trafford Park tram line than they have made moves to close the surrounding cycle routes. The building of this line will have a major impact on people commuting to MediaCity from South Manchester and Trafford in the same way that Cross Street has become a no-go route for cycling in the city centre.

This notice appeared a couple of weeks ago along the Trafford side of the Ship Canal. It is a notice of an order to close this path, which is a busy cycle route.

The order contains no plans or anything like that but just says it is giving notice of an order to close the path linking Trafford Wharf Road to the path flanking the southern bank of the Manchester Ship Canal. 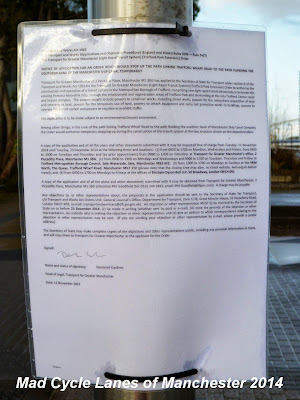 If this is your route too and from work please request a copy of the plans.

You are going to find your route to work closed, possibly for many months if not more than a year. 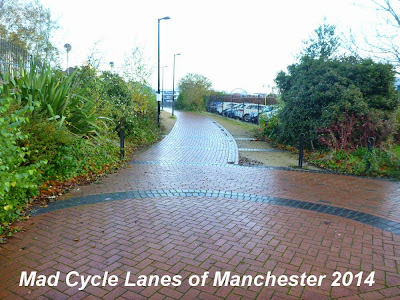 This is the view from the other side. 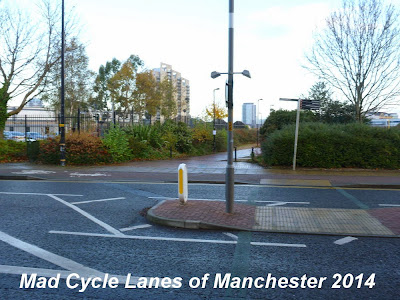 This route is part of NCN route 55 so I hope Sustrans will be objecting too. 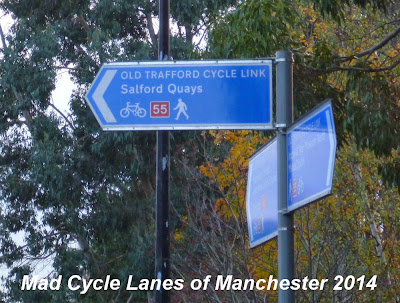