Compare and contrast these two photographs, taken on the same day at the beginning and end of a train journey last week.

The first photograph was taken at Bristol Temple Meads where there is a very large number of cycle racks on the main platform. There must be capacity for hundreds of bikes. The racks are all under cover and relatively secure as they are beyond the ticket barrier. 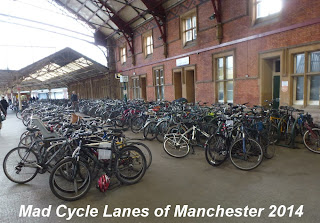 The second was taken at Manchester Piccadilly. At least as big and as busy as Bristol TM, but the only cycle parking is this very small number of cycle racks, outside in the rain and tucked away in a corner where they are not overlooked. 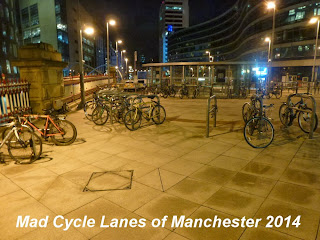 Manchester really has a long way to go before it can claim to be a world class cycling city!

P.S. Network Rail operate both these stations, so all the local excuses about an unfriendly station operator are clearly bullshit!
at 17:33