Sorry, no photos this month, too busy trying not to run into anyone else with the Brox whilst picking the music...

By 6pm there were about 7 of us so I wondered whether it was going to be a washout, but people rolled up eventually and we had a really laid back ride with at least 40 cycles. There were just the two sound systems, me towards the front and the bike mounted ghetto blaster towards the back of the ride.http://www.blogger.com/img/blank.gif

Lots of really positive vibes, even from many of the car drivers, which just added to the relaxed feel of the ride. We ended up at a street party in Hulme Street and a small bunch of us then rode on to Castlefields.

Indymedia has a few photos here.
at 22:40 No comments:

Having found a reference to a tunnel under the road at Sainsbury's, I had a nose round with the camera today.

Sure enough, you can see the two ends and some of the infrastructure joining the tunnel to the Fallowfield path.

From the west the tunnel is approached by the side of the buildings on the railway bed. 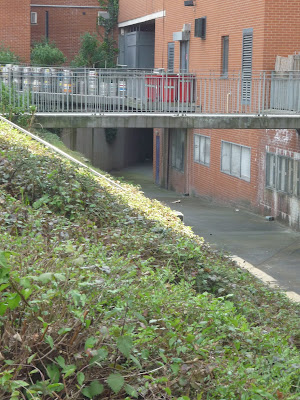 The entrance can be seen, blocked by gates. 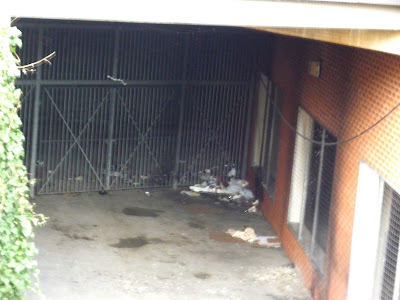 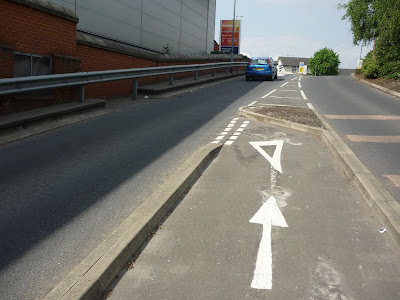 which connects to the gap in the kerb... 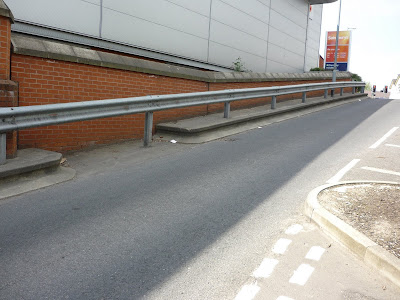 Behind the wall is the cycle route 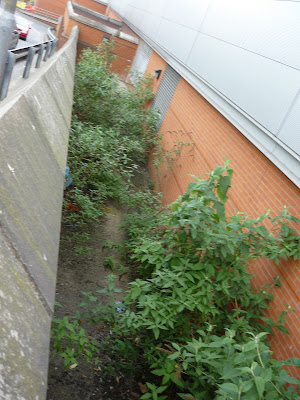 which would have entered the tunnel here. 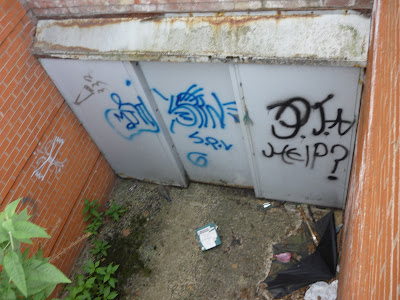 The designer has removed his version from his web site, so sadly we don't know if he thought this was a good idea or not.

This all begs the question, just how much money was spent on this tunnel and who ended up paying for it?

Update: a follower on twitter has found the text for the deleted web page on the Wayback Machine, so we can now see what he wrote, though the pictures are now sadly lost.


View Fallowfield Loop Tunnel in a larger map
at 13:39 5 comments:

Back in October I posted this photograph of a bollard in Sackville Street which had been added right in the middle of the pavement cycle sign. 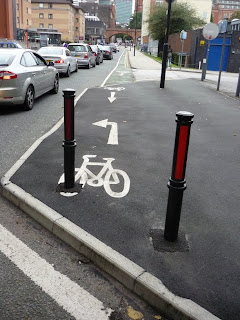 Now, whilst the bollard is still in the middle of the cycle sign, someone has been rearranging the paintwork. 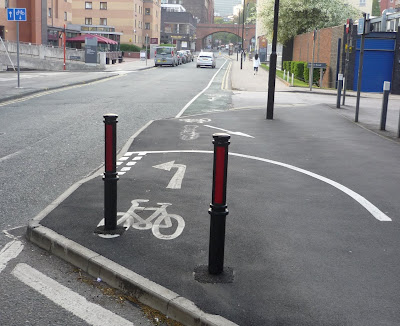 From the opposite direction it used to look like this... 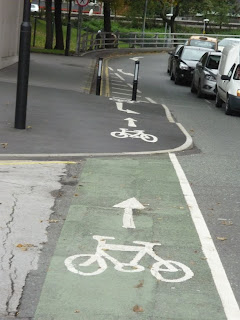 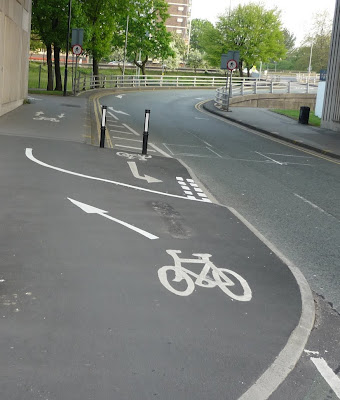 Notice how the original southbound arrow has been burnt away. However they didn't bother to remove the cycle symbol from around the bollard, so it still looks pretty stupid when approaching from the South. 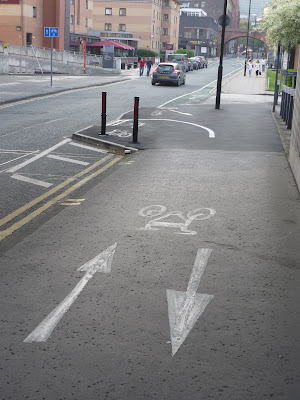 Which leaves me to wonder whether this work had been scheduled back before October 2010, or whether this paintwork has been amended as a result of some bad publicity...

Had I tried a little harder to research Saturday's route I might have been better prepared. Adding the word "barrier" to Fallowfield Loop on Google would have given me a much better idea of the route.

2people1bike demonstrates the problem nicely with this photo showing how to get a tandem past the barriers. 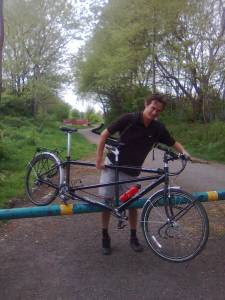 And, if you can cope with wobbly video from a head-mounted camera, there is also a video, though not of the section I cycled.

Here by comparison is Rowland Dye's rather better made timelapse video of the Bristol to Bath Railway Path - notice the lack of barriers along the path.

If you are yet to be convinced as to why all cycle routes like this should be open to non-standard pedal cycles then watch this programme - jump 17 minutes in to see just how important cycling is for people with a disability.

"As is this page where I found out there is actually a tunnel underneath Sainsbury's on Wilmslow Road, the design was a cock-up though so it's not in use."

Now, whilst the page linked to is no longer available, it links to this web site... http://www.steveessex.com/jobs/, a name which also turns up in this document about access barriers.

And this document contains a photo of the Fallowfield Loop which explains the horse shit on the path and, quite coincidentally, a photo of my Brox.
at 20:00 3 comments: 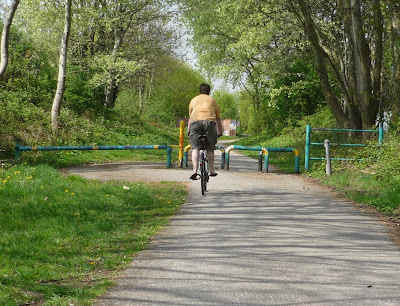 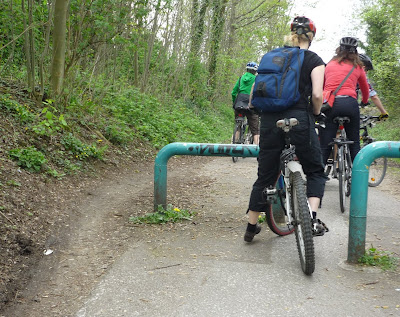 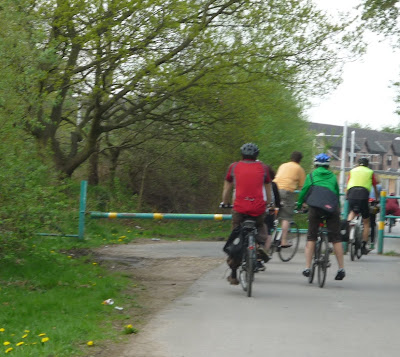 On Stretford Road, between Northumberland Road and Henrietta Street/East Union Street, there is a set of parking bays on both sides of the road.

The Cycle lane is narrowed and run along the edge of the parking bays, putting anyone tempted to cycle within the lane into some considerable danger from drivers pulling out or opening their car door. 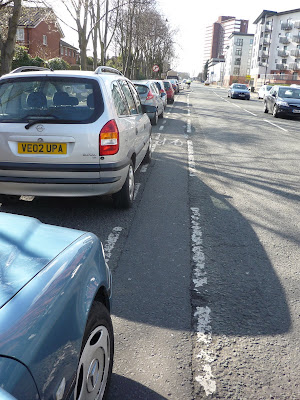 If you cycle east along Stretford Road, the cycle lane announces it is about to end. 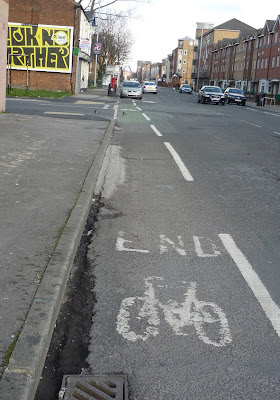 This happens right next to the boundary between Trafford and Manchester, demonstrating joined up thinking..... 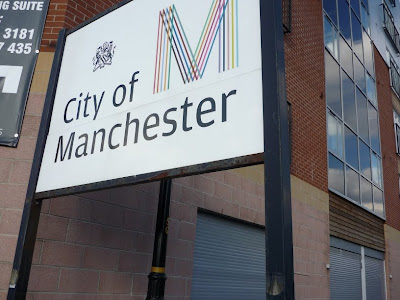