The processed Census data published by TfGM is a mine of information that overturns many people's assumptions about driving in Manchester, including mine.

Many people in Manchester won't go half a mile down the road to fetch a newspaper without resorting to their car, even some people who live in the city centre, or at least that is the impression you often get.

So it comes as some surprise to discover that 45% of all households in Manchester do not have a car or van. Outside of London, the only other local authorities with lower levels of car ownership are the Isles of Scilly and Liverpool. The figure is 31% for Greater Manchester as a whole. 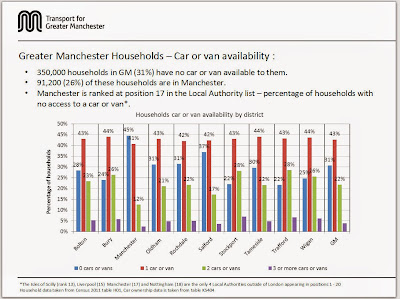 Manchester City council need to stop wasting time and money on pandering to the motorists and enable more people to get around Manchester without a car.