You've probably heard about the Green Surge in the news. The party membership overtook both UKIP and the LibDems back in January. The latest figures put the party membership at nearly 56,000, more than doubling over the past year.

The key indicator that this membership surge is making a difference is that at the current Party conference 45% of delegates are new members. These new members include a large number of activists.


Just under half (45%) of attendees to @TheGreenParty's Spring Conference are new members who have joined in the last year #GreenSurge
— The Green Party (@TheGreenParty) March 6, 2015

So, what is happening in Manchester? Is there any prospect of the Green Surge making any difference here?

Let's start with a look at the membership figures:-

The membership of the Manchester Green Party has increased by more than 300% in the past year. 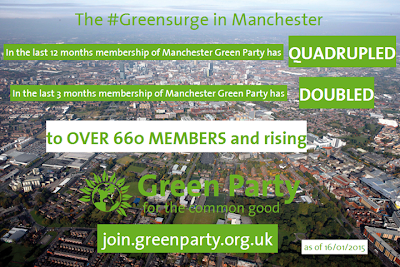 So why this rapid rise in membership in Manchester? As far as I can tell the Green Party membership has been kept artificially low for the past few years because of a negative attitude towards new members and new ideas from some senior activists. It would seem that there has recently been a change of committee and the membership surge has swept away many the problems.

So, how is this reinvigorated local party likely to affect the elections in May? Well the Green Party don't stand a chance of gaining a parliamentary seat in Manchester. However, according to the web site http://www.electionforecast.co.uk/ there is a distinct likelihood of the Green Party gaining second place in both Manchester Central and Manchester Gorton with a third place in Manchester Withington. With the Labour Party holding a clear lead in all three voting Green in these constituencies will not damage the chances of Labour winning the seats., but two or three second places would change the prospects for the Green Party's in this area.

The party's prospects in the local elections are another matter. With the Labour Party holding all but one of the seats on the council (the other was elected as a Labour candidate) the lack of any sort of effective opposition on the council is not healthy for local democracy. Last year was the first time the Green Party had come second in the overall number of votes for the Manchester local elections with 12.6%, their highest ever vote in the local elections. They gained over 20% of the vote in five wards and were above 19% in another two:

So understandably the Green Party is concentrating on Hulme and Fallowfield. However, both these seats will be hard to crack as they have been solid Labour seats for years, with the one exception when the rapid change in population during the redevelopment of the area over 10 years ago when one Green was elected in an all-out election.

The key issue is that there are other seats in this list that have previously been held by the LibDems. In City Centre, Chorlton, Withington and Whalley Range there is the prospect of the Green Party picking up former LibDem votes and wining the seat. Of particular interest is the City Centre, here the Green Party went from last place in 2011 when the current incumbent was elected, to fourth in 2012 and yet was in second place last year. Here the gap was less than 700 votes last year, by far the closest second place, and with such a low turnout last time, a rise in the number of people turning out to vote could easily give the seat to the Greens.

So this year a Green Vote could well elect Green Party councillors in Manchester and revive the role of the official opposition on the city council. It could also put the party in second place in two parliamentary seats. As the Green Party have shown in Bristol, they can have a positive impact on a council's approach to cycling and walking and help improve the environment of a city. The national events over the coming two months will probably have the biggest impact on the election outcome, but local conditions could make a big difference.