I came across this headline on the This is Lancashire web site a few weeks ago and have been trying to put together the few scraps of information I can find on the web. The next piece I found was "Final stage of new Bolton cycle route gets green light"on the Bolton News site, along with "Cyclists to be ‘caged’ in new Bolton route"which has a useful picture giving one of the viaduct locations and "Former Bury - Bolton railway line" on the Bury Council web site.

The route will mostly be on the trackbed of part of the old Liverpool & Bury Railway.

From what I can gather, the route will start from Scholey Street on an industrial estate in Bolton - not ideal because of the heavy lorries using the road. The route will then be off road on the old railway line over St Peter's Way on the Burnden Viaduct then over the Darcy Lever Viaduct over the River Tonge. From there it will go along or alongside Gorses Road and divert off the railway route through New House Farm playing fields and back onto the railway line where it reaches the boundary with Bury.

Soon after the railway route is lost at Boundary Drive and Boundary Street in Bradley Fold, but can be rejoined on an existing path for a short way the other side of Bradley Lane. The path is then planned to run along the railway route to another interruption at Black Lane and then rejoining the route the other side to join up with the existing Daisyfield Greenway (photo below) to reach Bury. 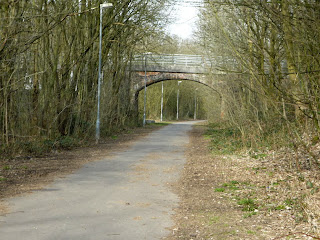 If anyone has any more details about this route, I'm curious to know when it is planned to open.

Some old photos of the route.