Cycling levels up and down in GM

The processed Census data published by TfGM is quite revealing when it comes to people's chosen method of travelling to work.

Whilst there have been exaggerated claims in the press about increases in cycling levels in Greater Manchester, the reality is rather more sobering.

The headline-grabbing figure of an 82% rise is only for the Manchester area, and is wildly exaggerated by a number of factors. 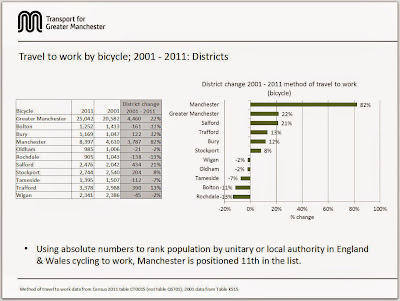 This figure is only for Manchester where the population rose 19% during that same period, so the rise is closer to 55% corrected for the rise in population.

However, if you correct for the increase in travel as well by looking at the proportion of journeys the rise is more like 22%. Cycling in Manchester went from 3.2% to 3.9% of journeys to work, a quite modest rise. 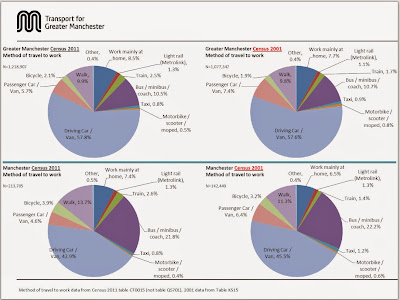 In other parts of Greater Manchester cycling fell overall and as a proportion of journeys to work in Bolton, Oldham, Rochdale, Thameside and Wigan.

So cycling is both up and down in Greater Manchester, depending on where you live.