Some cycle facilities aren't just tokenism and a waste of money, they are also worse than nothing.

A great report by Warrington Cycle Campaign called The Effect of Cycle Lanes on Cyclists' Road Space demonstrates clearly how a 1.5m wide cycle lane reduces the amount of road-space available to cyclists.

Yes, a 1.5m wide cycle lane is worse than no cycle lane at all. Yet if you measure the cycle lanes in Greater Manchester you will struggle to find any that are wider than that and Salford have put in cycle lanes that are considerably narrower. 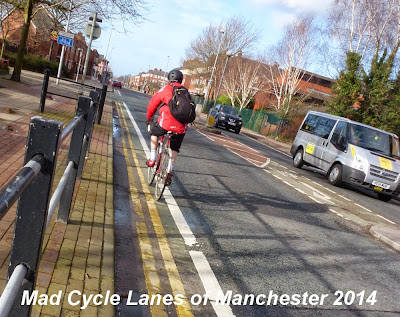 Then there are the shared use pavement schemes. This shared use pavement on Broadway, round the back of MediaCity apparently cost £300,000 pounds to install, but by all reports people prefer to cycle on the road, not least because of all those "cyclist dismount" signs. If anyone has more details on the Broadway Cycle Scheme I'd be interested to see where the money went. 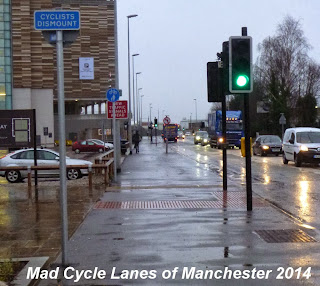 And then there are the plain idiotic cycle facilities. Pavement lanes with traffic lights or lampposts in then are a firm favorite of mine. This is another from Salford, again part of the Broadway Cycle Scheme. 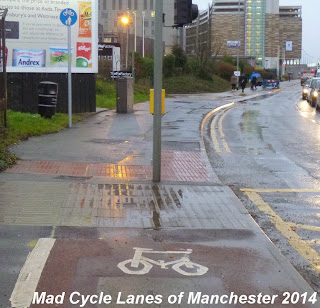 With all the money now flowing in for Velocity 2025, we need to ensure that all future cycle facilities are significant improvements on what went before.