On Thursday TfGM finally went public with its plans for a new Cycle Hub at MediaCity in Salford.

It was very noticeable that the press release (below) fails to mention the full costs revealed on the TfGM web site or even the number of parking places available. 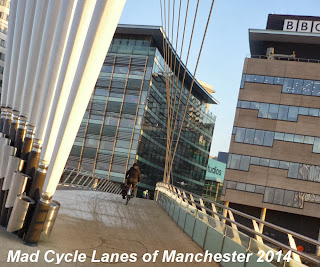 Like the Manchester City Centre Cycle Hub this facility will cost users £100 per year for just cycle parking and £200 if they want to use the showers and lockers. The reaction of people at MediaCity when asked about paying for cycle parking has been extremely negative and this site could well end up over half empty like the city centre.

Despite the relatively poor facilities there is already a high level of cycling to MediaCity compared to most other places in Greater Manchester. The cycle hub will only provide 300 spaces which would be woefully inadequate, but for the high cost which will put most people off.

If you have any feedback and/or questions regarding the MediaCityUK Cycle Hub, TfGM and MediaCityUK will be holding two ‘drop in’ sessions on Thursday 20th February and Tuesday 25th February, 12-2pm in the Open Centre at MediaCityUK.

Plans for a major new cycle hub at MediaCityUK have been submitted in a bid to encourage commuter cycling to the region’s flagship creative and digital centre.

The hub, which is being developed by Transport for Greater Manchester (TfGM), would operate on a membership basis with secure parking spaces for up to 300 bikes.

A planning application has now been submitted for the development, which includes showers, toilets, changing areas and lockers. The hub will be covered by CCTV with smartcard access for members.

The hub is planned for development on land next to the BBC’s Dock House, and Orange Tower, home to ITV and the University of Salford.
If approved, it would join a growing network of cycle hubs across Greater Manchester including Manchester’s large regional centre cycle hub at City Tower, and the smaller district hubs now open in Bury and Ashton-under-Lyne.

It is hoped that, subject to the necessary approvals being granted, the MediaCityUK Cycle Hub will be open during summer 2014.

Councillor Andrew Fender, Chair of the TfGM Committee, said: “It’s great to see MediaCityUK’s new cycle hub take that next step to becoming a reality.
“MediaCityUK is now one of the region’s major employers, with over 200 businesses on-site, and we want to make travel to work there as sustainable as possible. We already have frequent direct Metrolink and bus services and we know there is huge demand to cycle too.

“The cycle hub will allow people to leave their bikes behind in safety, as well as offering a place to take a shower and store their belongings.
“Along with affordable membership rates we hope a hub at MediaCityUK will encourage more people to join the thousands who are already commuting by bike.”

Stephen Wild, managing director of MediaCityUK, said: “Bikes have become the must-use mode of transport for persons working, living or visiting MediaCityUK, so it is fantastic to partner with TfGM to bring the cycle hub to our community.
“It promises to be a great addition and is just one of many exciting initiatives that we aim to roll out to encourage more people to get on their bikes and utilise the many safe and attractive routes that connect to MediaCityUK.”

Easy to manage, value-for-money annual and monthly hub membership options will be available, with membership starting at less than £2 a week.
TfGM is now inviting registrations of interest and feedback on the hub at http://cycling.tfgm.com/join-a-hub-media-city.htm. Two drop-in sessions will be MediaCityUK’s Open Centre – from 12-2pm on Thursday 20 February and Tuesday 25 February – to answer questions and listen to feedback, which will help inform the final design.

TfGM is planning to open more district cycle hubs throughout the region as part of its Commuter Cycling Project, which is being supported by the Department for Transport’s Local Sustainable Transport Fund.

The find out more about cycling in Greater Manchester, visit www.tfgm.com/cycling.