My excuse for missing the Naked Bike Ride last Friday was that I was flat on my back in the Manchester Royal Infirmary following an operation, so no photos from me on this one. However, I have to admit that these naked rides are a bit outside my comfort zone.

At an estimated 200 riders it was the biggest mass bike protest ride this year, larger than last month's Critical Mass and Space for Cycling rides.

It also produced some of the most positive press coverage for cycling I have seen for ages in Manchester. 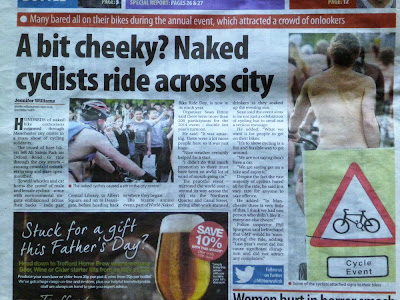 Well done to Sean Fitton and all those who took part!