A big thank you to Anthony H on Twitter for keeping us all informed of developments in Camden.

Remember all the hype about how wonderful Camden's new cycle infrastructure was? No, then here are a few reminders....

Though doubts were raised from the beginning...

The Alternative Department for Transport - "Armadillos: The Emperor’s New Infrastructure"

Well this cheap plastic infrastructure" continues to degrade and, just as in Salford, it is a complete failure at keeping vehicles out, as these images testify..

So, with Salford Council having gone very quiet about Armadillos, following their "consultation" on the matter, we can but hope that TfGM and Manchester City Council do not waste money on this crap. 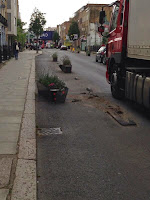