Here is a chance to go and ask why cycling isn't being supported by the same long term high priority spending approach that Metrolink has. 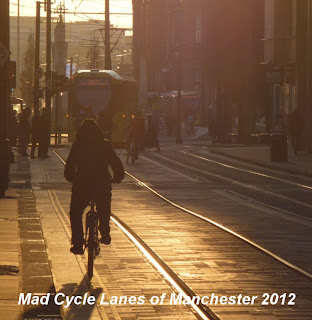 The meeting is at Manchester Town Hall in the Council Chamber on Tuesday 21 January, from 11am – 1pm.

Councillors and directors from TfGM will be available for a question and answer session on the transport budget.

Sadly those of us in full time employment will be unable to attend...

From the TfGM web site:-

Transport budget on the agenda at briefing

A briefing on transport spending plans for 2014/15 is to take place at Manchester Town Hall next week.

The Transport for Greater Manchester Committee (TfGMC) is holding its annual budget briefing in the Council Chamber on Tuesday 21 January, from 11am – 1pm.

Greater Manchester residents are welcome to attend the meeting, where leading councillors and directors from TfGM will be available for a question and answer session on the transport budget.

The briefing will be hosted by Councillor Andrew Fender, Chair of TfGMC. He said: “Manchester has the fastest growing economy in the UK outside London and transport has a crucial role to play in supporting and sustaining that growth.

“We’ve achieved a great deal over recent years as we deliver the £1.5bn investment in transport infrastructure and services through the Greater Manchester Transport Fund. Equally as important is our day-to-day spending on crucial bus services and concessionary travel.

“As a local government body, we are acutely aware of the need to make ongoing efficiency and cost savings – while at the same time protecting our long-term investment in transport infrastructure.

“Anyone who wants to learn more about the challenges transport faces in the year ahead is welcome to come along to the budget briefing.”

The £1.5 billion Greater Manchester Transport Fund was established in May 2009 to pay for major transport schemes, including the Metrolink expansion programme, bus priority projects, park and ride and new transport interchanges.