After the slightly somber, yet uplifting mood of August's ride, this month was well back into the party spirit. Around 280 people took to the streets with at least 4 decent sound systems. There were lots of new faces and some people returning to the ride after many years away...

However, as with any Critical Mass with lots of new people it can be a bit of a bumpy start. The first was the right turn off Portland street into Sackville Street directing the mass straight for the narrow bike contraflow. Dipak got there just in time to block the way and divert the ride left along Bloom Street and into Chorlton Street. The look on his face was wonderful :) 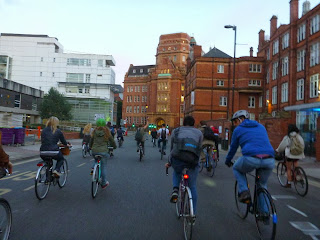 After a big debate about direction, the ride turned right and swept along Whitworth Street. 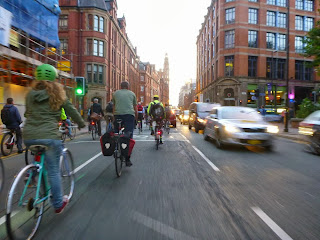 The light was fading rapidly with the setting sun, but giving a beautiful sunset. 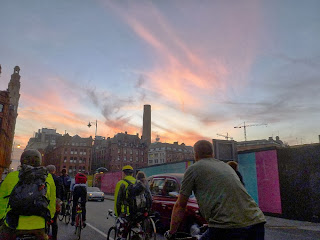 And the party came to life as we crossed Oxford Road 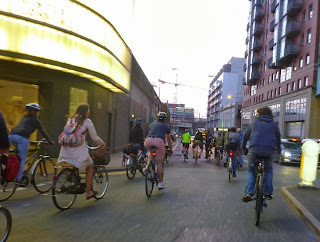 helped by the amassing views of the city at dusk. 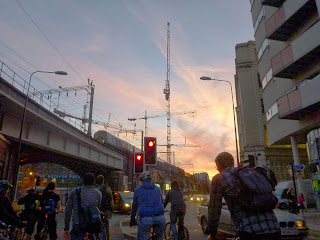 The ride almost lost its way again at the next junction, 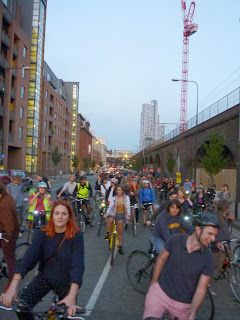 but finally turned into Deansgate and rode it in full party spirit. Even the people stuck in the traffic jams were waving and hooting horns in support. 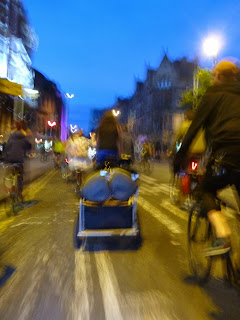 The ride then started to head south down Princes street 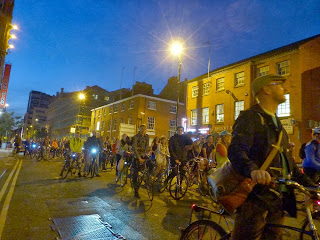 and I left the ride as it crossed Portland Street, heading for Platts Fields Park. 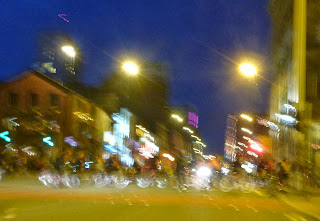 The ride was hard work for those plugging side roads and shepherding the ride, and there was a bit of silly behaviour later on. Manchester Critical Mass is successful because it keeps moving, is well behaved, communicates well with drivers and is very fluffy. It also works best when everyone looks out for everyone else. Next month is the Halloween ride, traditionally the biggest of the year, bring lights, costumes, a party mood and a great attitude.