The A56 Chester Road/Bridgewater Viaduct heading north east towards Deansgate has a two way cycle track on the right hand side. for people cycling south east it is ok, just so long as you watch out for traffic at the junctions.

However, if you are using it to cycle north west you are in for a nasty shock...

It is tricky to cross junctions on the wrong side of the road, and here at the junction with Great Jackson Street the road eats into your space making curved give way lines. 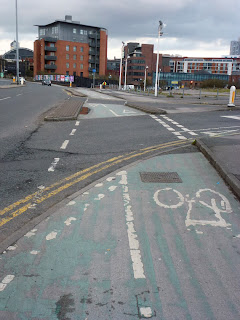 Carrying on it doesn't seem too bad, 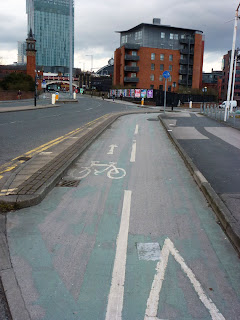 but if you are aiming to go north up towards Deansgate then the most obvious thing to do is take this left turn. 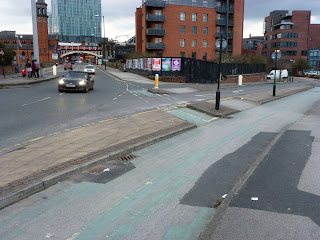 However, as these two lads find, you are simply dumped into the path of oncoming traffic. 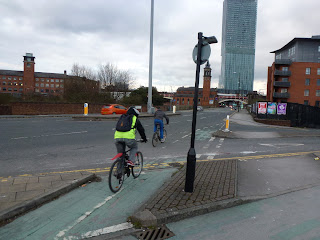 The large raised traffic island then gets in your way, making things even more dangerous. 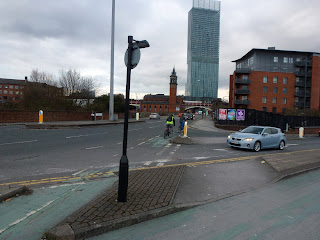 From here on it is anyone's guess, one of them goes straight on to the pavement whilst the other dives left across the road. 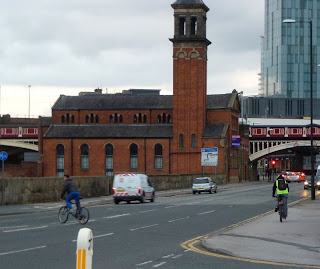 He did make it across safely, leaving his mate going up the pavement on the other side of the road. 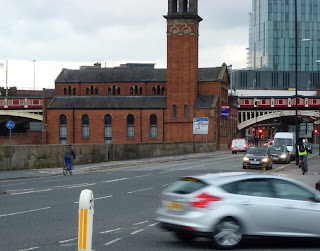 This is one of the worst examples of dangerous cycling half-measures in Manchester, that I have found. I know of one person who was hit by a car here 10 years ago, and I am sure there have been more. I think this was a facility that was unfinished, rather than designed to be this dangerous, but either way round it should never have been left like this.

I find it far safer to stick to the road going north east on Chester Road, and avoid this track altogether.