... or how Manchester won't be Going Dutch, but may be taking a route to Camden with armadillos in the roads. 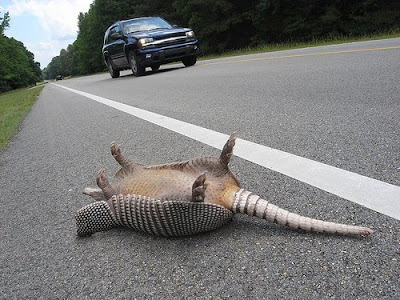 Photo from James and the Giant Bike Ride

Last Tuesday I went to a CILT (The Chartered Institute of Logistics & Transport) meeting at the Rain Bar in Manchester on the theme of A Cycle Strategy for Central Manchester. The billed speaker was Helen Ramsden, Head of Travel Choices at TfGM, but the talk was actually given by Nick Vaughan of TfGM. The room contained the usual gender bias that afflicts such occasions, Helen Ramsden was present, but was one of only 3 women amongst 24 men.

Nick Vaughan got underway by admitting that his real expertise was in bus routes and that he had only recently taken on responsibility for cycling. He did, however, say that he regularly rides a bicycle, to and from his local station to get to work. He made some good points about the conditions for cycling in Manchester being potentially better than for Amsterdam, including the fact that Manchester has a LOWER average annual rain fall level than Amsterdam, 32 inches against 36 for Amsterdam. He then conceded that a lot of work on cycling in the UK has been focused on cycle sportif and said that we "need to move beyond this" in order to address the key benefits of cycling for health, the environment and the economy.

The figures from the 2011 Census show that there were 25,000 cycle to work trips in Manchester, against 800,000 by car. However, 30% of these car trips were less than 3 miles, and these 240,000 car based commuters are the people that TfGM think can be persuaded to take up cycling.

He introduced the Velocity bid and then talked about how TfGM intend to spend the money, touching on 7 main areas:-


This was the point where the excuses came out. TfGM have clearly decided that they will not be providing Dutch standard cycle routes in Manchester. Their main excuse is cost. The reasons given included drainage and litter, so they are going for what they call "light segregation" using splitter islands and not solid boundaries.

It seems that TfGM are sold on the idea of installing, so called, armadillos to mark the edge of the cycle lanes. These cheap plastic lumps which are bolted onto the road will be trialed on a cycle route in Salford by the end of 2013 (possibly Liverpool Street between cross lane and Albion way). 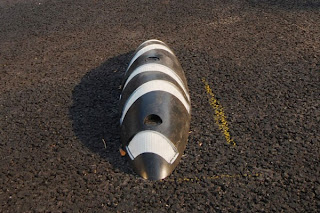 Photo by Laura Laker from the Cycling Weekly web site.

The idea is that these lumps (available in three heights, 5, 9 and 13 cm) will keep traffic out of cycle lanes. The GMCC Deputy Secretary, present at the meeting insisted on calling these "protected" rather than "segregated" cycle routes. However, whilst they may dissuade all but the largest of cars from using the cycle lanes, they will not protect the lane from being used by taxis and delivery vans as a convenient stopping area. After all such drivers have no qualms about driving onto the pavement in places like Oxford Road, so a few lumps of plastic won't stop them blocking a cycle lane.. 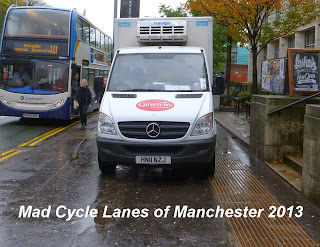 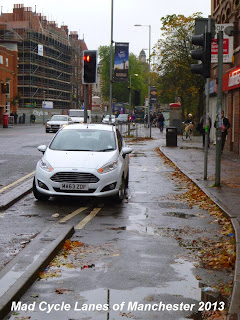 In Camden, where these armadillos have been installed, they have not been used in isolation. Large, heavy planters have also been placed along the lanes to clearly mark the cycle lane and deter parking.

So, we will have to wait and see how TfGM use armadillos in Salford, but I strongly suspect we will not see our schemes being as good as Camden's and there are cycle campaigners who are not happy with what has been built there. The bus stops are just dreadful!

I do not think that TfGM will ever have the motivation to produce good quality cycle infrastructure in Manchester if some cycle campaigners in Manchester are prepared to give the thumbs up to half baked designs. I do not see a few lumps providing sufficient protection for a cycle route when road traffic law is not enforced in the area.


This part of the presentation was all about TfGM's Cycle Hubs. There was lots of talk about the small park-and-ride style hubs that cost users £10 a year at Tram Stations like Bury and absolutely no mention of the big expensive white elephant in Manchester City Centre...


TfGM are looking for a long term cultural shift by encouraging children to cycle . They will be partnering with 10 schools in the area, which seems a very small number to me.


This section linked into the recent transfer of public health money to local authorities. There is an excellent guidance document from NICE on the topic of walking and cycling.


This was all about TfGM's cycle training programme and other measures that are already underway.


Again this section restated existing work on the GM cycling maps and other cycling information.


The final section was about the development of a "Bicycle Account" for Manchester.

This will be assessed across 5 areas:-

I opened the questions that followed by asking why the presentation had contained nothing about restricting car traffic, when the cities that have high cycling levels have been those that have restricted car use. This triggered a lot of excuses about the failure of the congestion charge in Manchester and some comments that car access will be restricted by the bus priority schemes and other measures. Reference was made to the Transport Strategy for Manchester City Centre as being evidence of this. It was very clear from some of the comments that council officers have suffered from some very nasty reactions from the road lobbyists in recent years, which left me wondering whether cycle campaigners should behave likewise.

I left the meeting feeling that whilst the level of funding for cycling has improved in Manchester, the attitudes of the local authorities need to change radically if Manchester is to get anywhere near its own cycling targets. I would like to see TfGM prove me wrong, but I don't hold out much hope.