Most of these photos are from a bike ride a couple of weeks ago, co things may have changed. The rest are from June 2013 as work on the busway began.

This route starts at the end of the Tyldesley Loopline at Ellenbrook. However conditions on this route are dreadful at the moment, so best get to here by road at the moment.

The busway opens out like a huge gaping mouth, and quite dwarfs the cycle track which goes round the back of the shelter to the right. 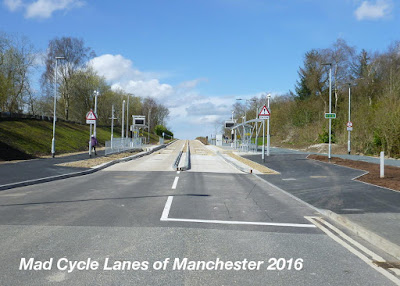 Quite a contrast to the old cycle route. 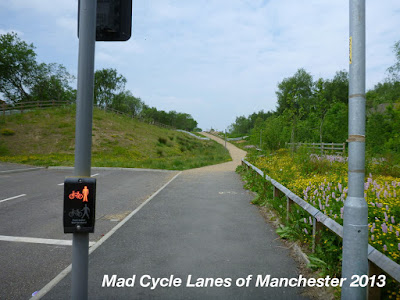 The busway entrances all contain car traps - we could do with those on a few cycle lanes! 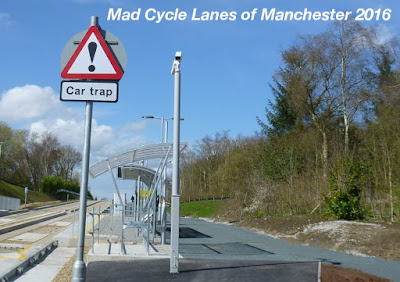 This was how the signs promotedthe busway durring the early preparation works - note the emphasis on horses - not a cycle to be seen. Clearly the equestrian lobby have good contacts at TfGM. 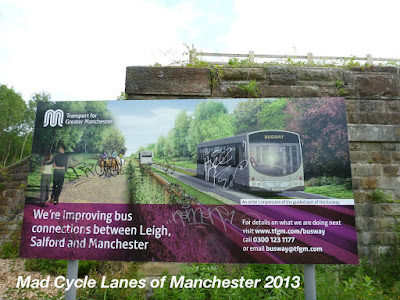 Evidence of horses is already beginning to accumulate on the path - horse riders should have the same duty as dog walkers to remove their animal's excrement from public places.

The surface of the path is very poor. It is a loose gravel surface and very uneven. It has been clearly chosen to favor horses over pedal cycles. It is almost certainly going to be unsuitable for hand trikes and road bikes. 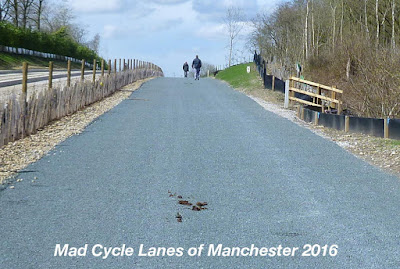 The road crossings are all on the level, despite this being an old railway route, each equipped with button operated traffic lights. This is the City Road crossing. 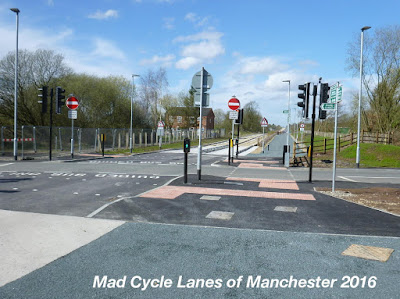 The majority of people using the path that day were walking dogs, 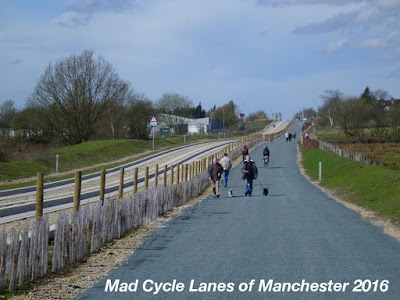 but I did see quite a few people on bikes. 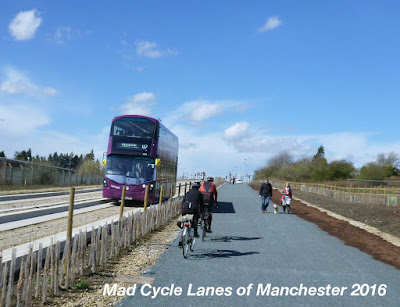 There are no barriers to prevent access by cars. However, as there has already been one crash on the busway, there will need to be regular access for cranes to move stranded buses. 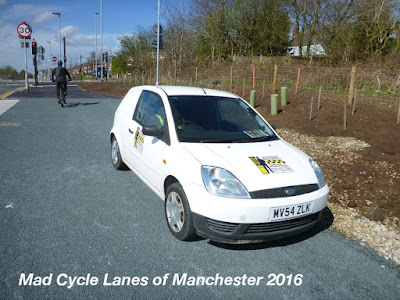 This vehicle was from a security firm, parked at the junction with Mosely Common Road. Here the railway line used to go under the road. 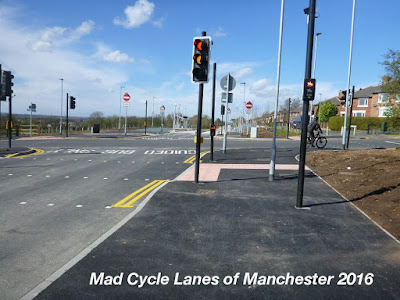 Over the road there was fencing across the path, but it had been moved aside. 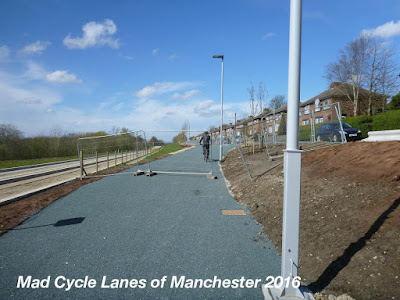 Here the track was quite narrow and the cycle path goes up onto the embankment, as it did before the works. 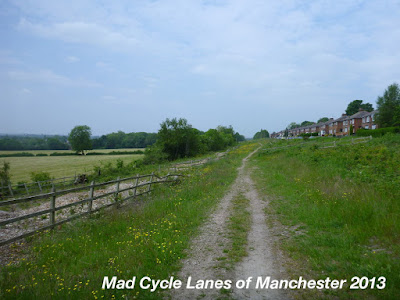 The track runs alongside Chester Road with no obvious means of stopping it from being used as a car park once the fencing goes. 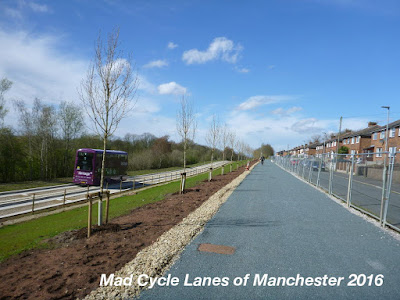 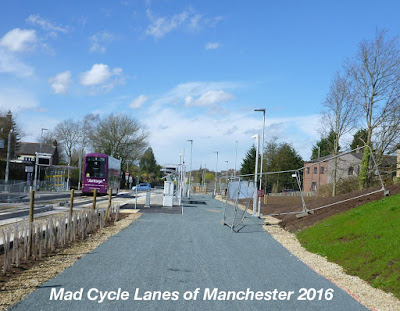 At this point the old railway track went under a bridge. 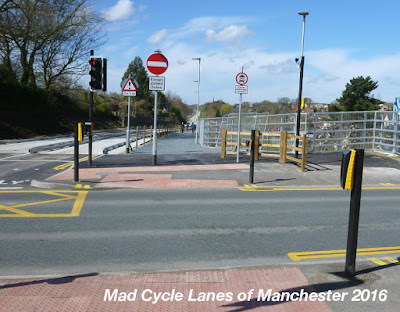 This was the view from just beyond in 2013.  Upton Lane still crossed the trackbed by bridge at this point. 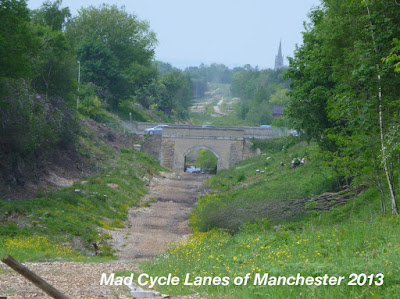 The cycle track crosses the busway in a couple of places. 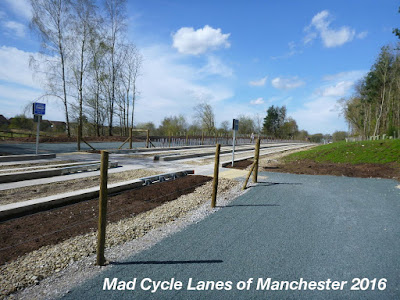 The notices warn that trespass on the busway is a criminal offence - shame the same can't be said for cars on cycleways. 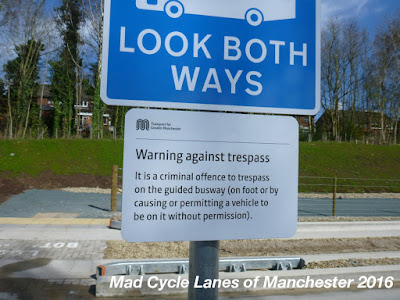 The next road crossing is Well Street. 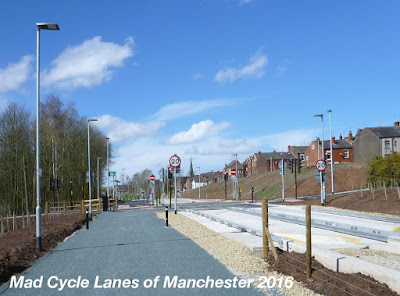 A little further along the path reaches Astley Street where this bus station has been created. 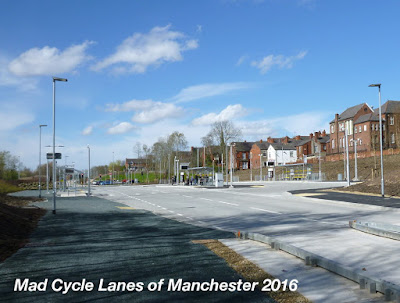 Again a lot of earth moving has been done to create this. 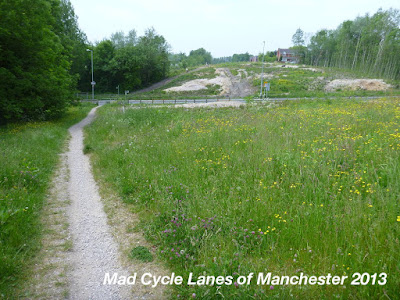 At this point the path ran out. It is completely un-surfaced and closed between here and Holden Road in Leigh itself. Whilst this could be an excellent route for cycle commuting, TfGM clearly want you to get on the bus. 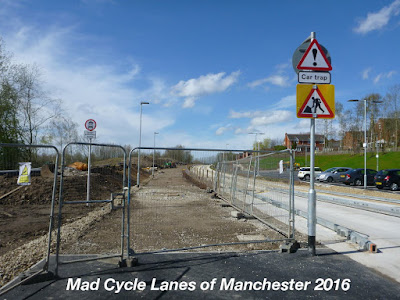 Whilst the cycle path may be unfinished and poorly surfaced, the car park is properly tarmaced and already in service. 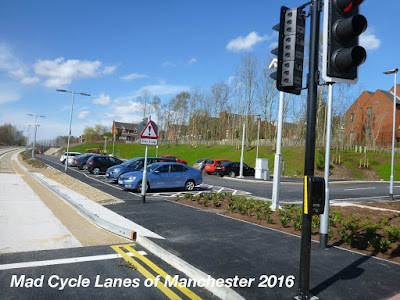 To get to the other end involved a 3.5 mile diversion with road conditions like this... 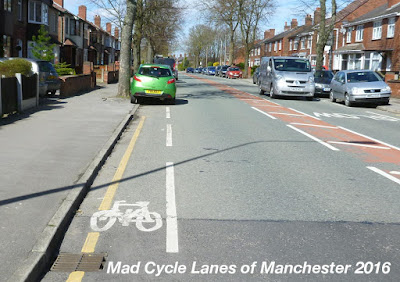 The other end of the gap at Holden lane. 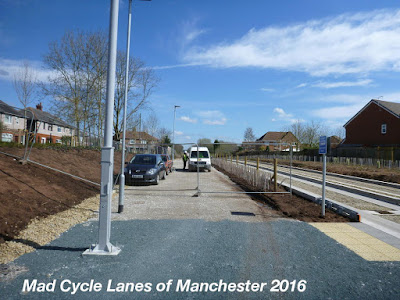 The last section of path is tarmaced but narrow. 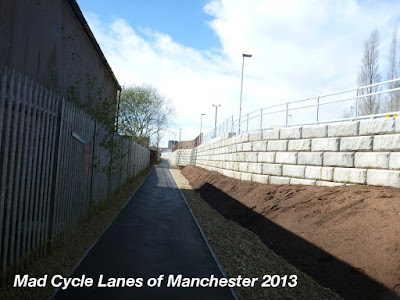 It brings you out to yet more freshly tarmaced car parks. 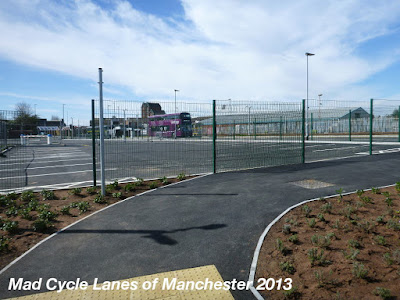 Two of them, on on either side of the cycle path 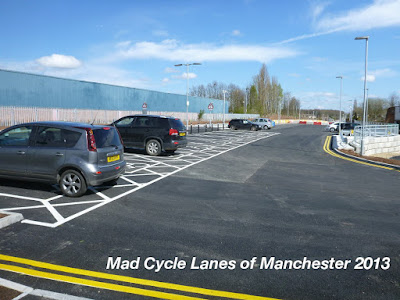 which brings you out onto the pavement at East Bond Street. 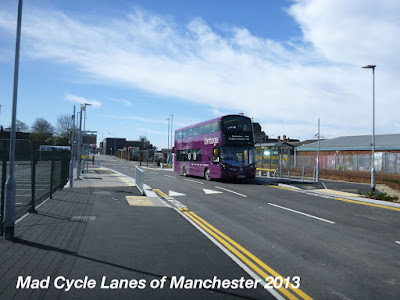 Generally, this route is a bit of a disappointment. We are pretty sure that the poor quality surface is as TfGM intended, as this message shows.

Pretty sure that the section open have the completed surface. Based on the message from them. pic.twitter.com/zB9GpnphoA
— Manchester Cycling (@MSCycling) April 8, 2016

Hopefully, the rest will be open soon for those who wish to cycle rather than sit on a bus, provided the uneven surface doesn't put them off.