I've meen meaning to have a look at this route for ages. It was the missing part of The River Medlock route that was closed for the construction of the tram route. It has now been reopened and links the Manchester City football ground to Piccadilly Station.

The route begins in the north west corner of the site. This is the view in the opposite direction, 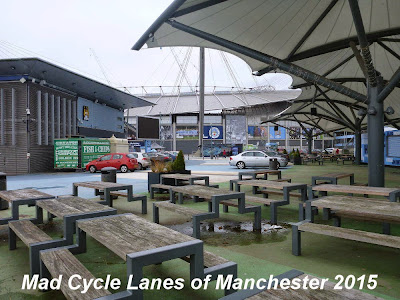 because the opposite view is very bland with no signposting on the site. 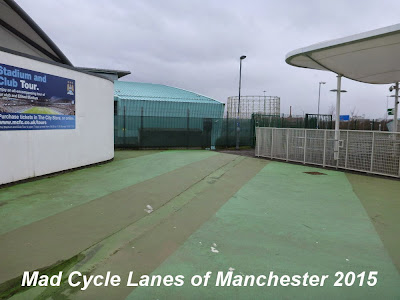 The entrance to the path is through a set of gates which suggests that the route may be closed from time to time. It is quite wide, but is probably packed at the end of a match... 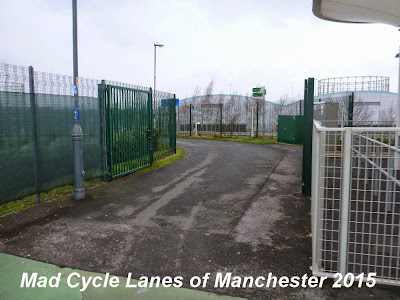 Once on the route there is a clear signpost showing the way. 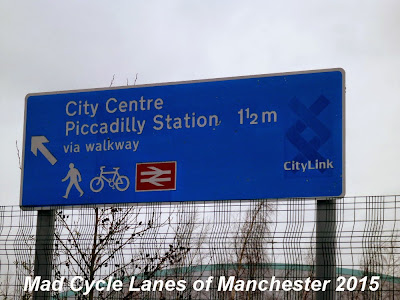 There are also these signs stuck to lampposts and the like. 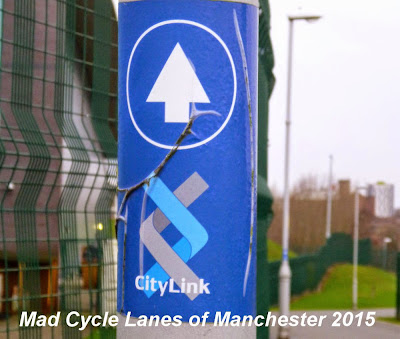 The route descends quite rapidly 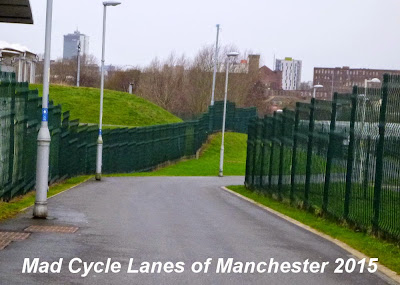 It has to get down to the level of the tram tracks to get under the railway bridge. 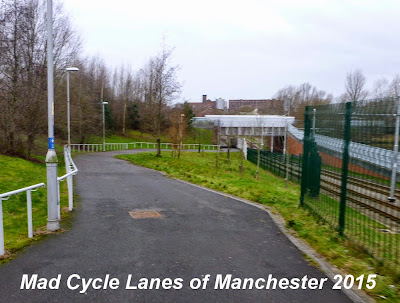 The path levels out once it gets down to the level of the rails. By the look of the tracks in these leaves the path is frequently used by motor vehicles.

At this point the path goes over the River Medlock, and the next bridge takes the route under Cambrian Street. 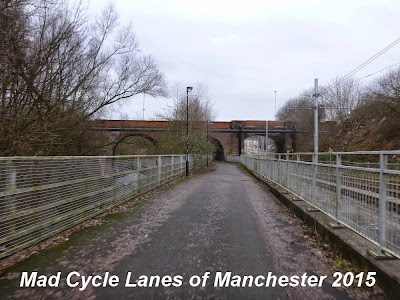 The viaduct is quite spectacular from the other side. 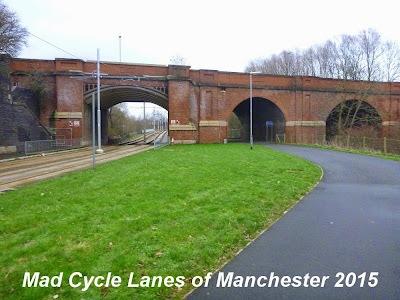 At this point the land opens out to the left with the river Medlock along the far edge. 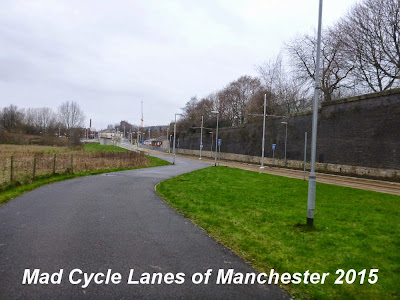 This is Holt Lane tram stop. Here you have to cross the tracks, 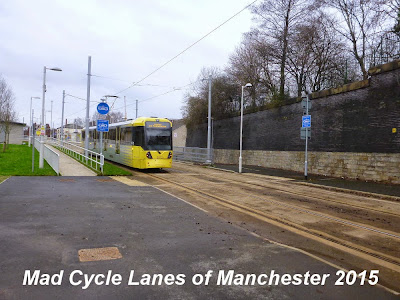 at which point the route takes a turn for the worse... 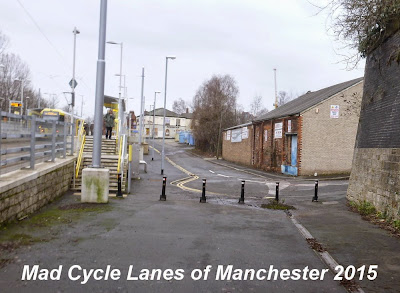 The signage doesn't tell you to stay on the pavement, but that is probably the intention 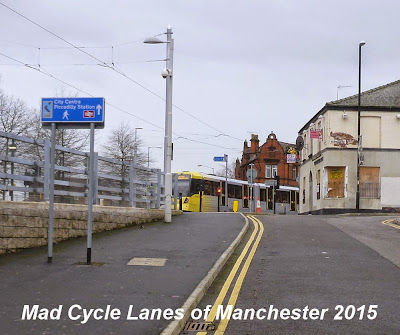 because you have to squeeze through the maze of signposts 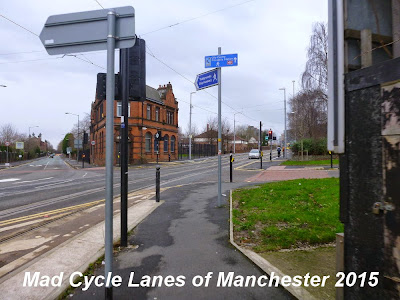 and out onto the pavement on Merrill Street. 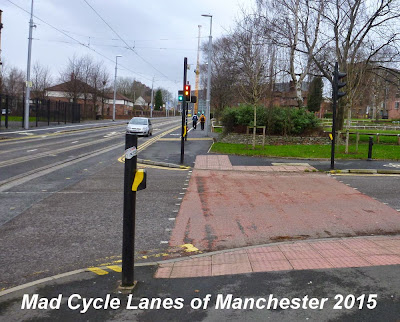 This is a horrible pavement cycle route which includes give way lines for every side road. 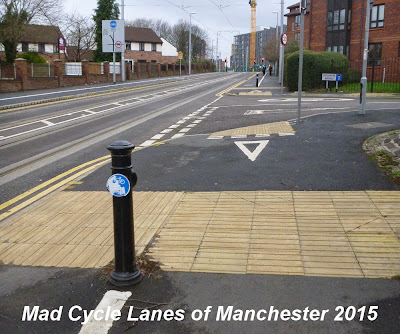 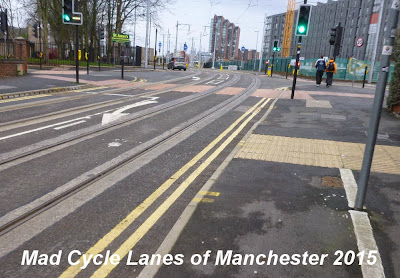 with a nasty road crossing 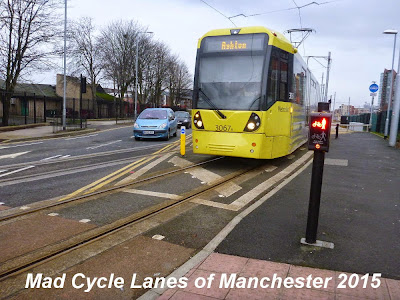 before being dumped onto Pollard Street with a poor road surface with these pointless green squares. 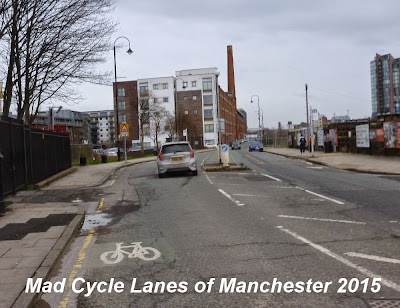 At the end of Pollard Street the route is signed right 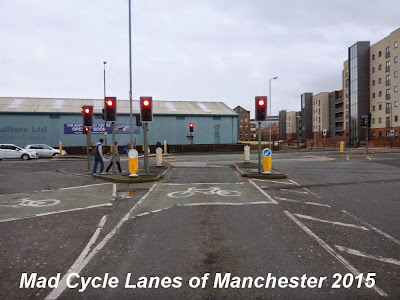 straight onto the inner ring road! The route is confirmed by the stickers on the lamp post, but there is nothing to say you can legally cycle on the pavement here. 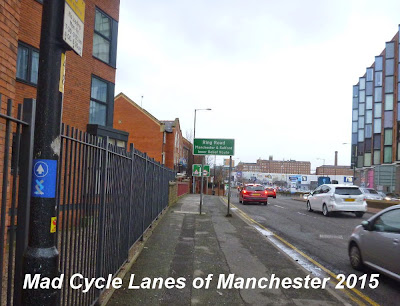 At the next junction there is nothing to tell you that the route now goes left down Store Street. 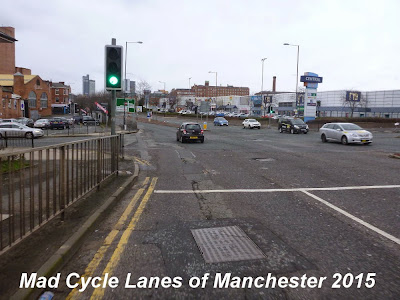 Here there is no provision for cycling. 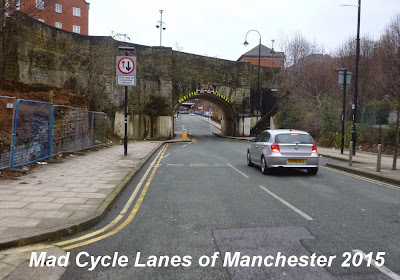 The route just runs out once it gets near Piccadilly Station, or it turns left round here somewhere... 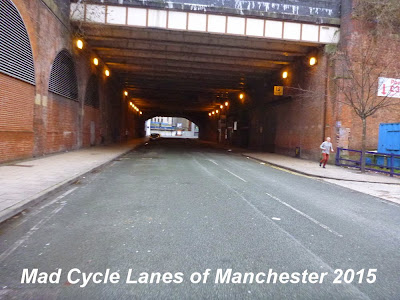 This is a very odd route. It feels like cycling was added as an afterthought to the walking route to cope with football fans traveling by train. The section from Holt Lane to Sports City is fine, but the rest is pretty crap.

Map - bit crap thanks to Google having changed stuff around