This two and a half mile stretch of path runs along the Ashton Canal towpath from the junction with the Hollingwood Branch Canal, known as Fairfield Junction to the junction with the Peak Forest Canal, Dunkfield Junction and on to the end of the canal towpath in Ashton, where it turns into the Huddersfield Canal. This is a continuation from Ashton Canal 3 - Clayton to Fairfield.

This section was ridden with Ian Tate, who features in many of these photographs. 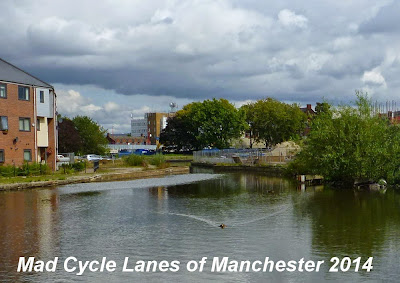 The first bridge, under Fairfield Road, is very narrow and has an uneven surface, so take care. 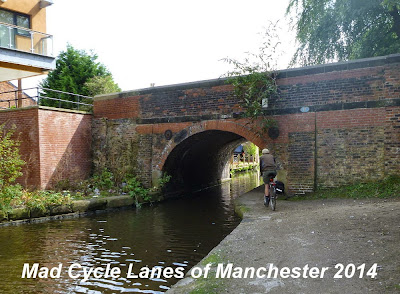 Just beyond is this narrow path, turn right here 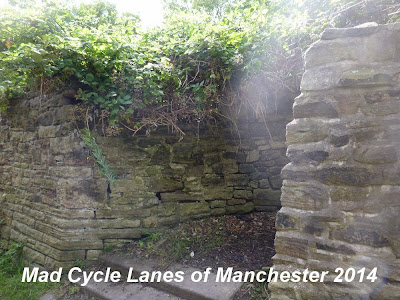 and a little way along you will find the Moravian Settlement, a weird time capsule of cobbled streets, founded by a religious sect. 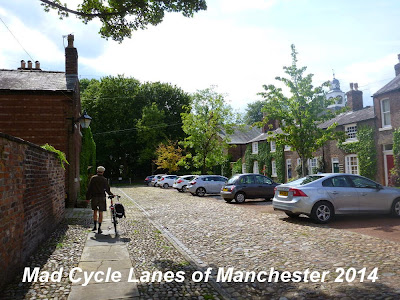 Back on the canal, the path in this section is reasonably well surfaced, here it goes under Manchester Road. 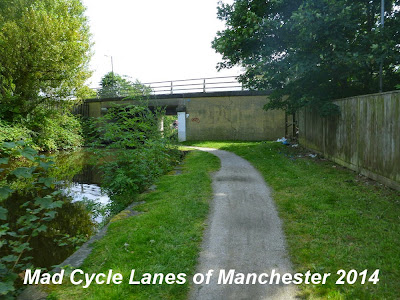 Further along, near Lumb Lane, the canal widens, this section was realigned at this point. 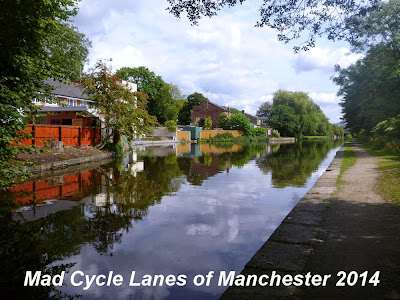 Soon the canal passes under the M60, here we found a boat moored up in the shelter of the long bridge. 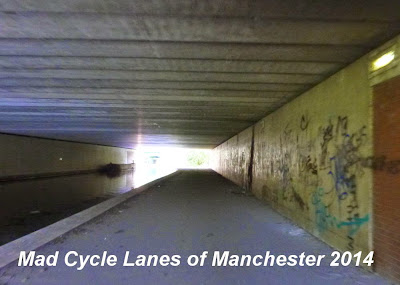 After passing under the railway, the canal has moorings on the far bank. 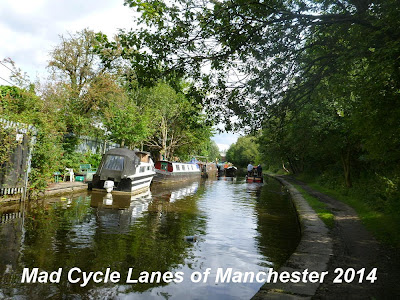 However, this is where the towpath dgrades badly, and the mud is quite bad here, and pretty dreadful after rain. 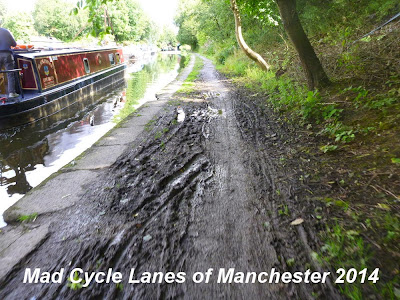 The morings end at the bridge under Hanover Street North. 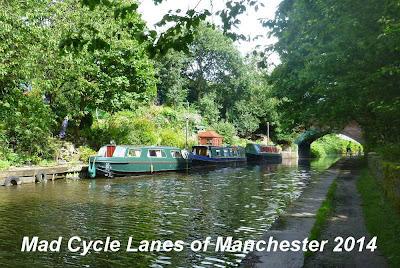 Then after passing under the A6140 this disused railway bridge comes into view as the canal turns right. 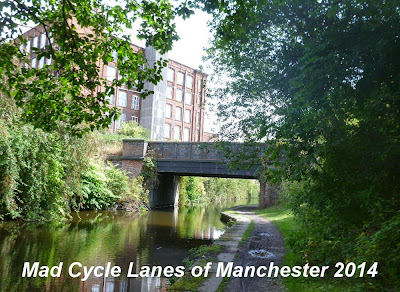 This rather imposing structure takes the canal under Stockport Road, 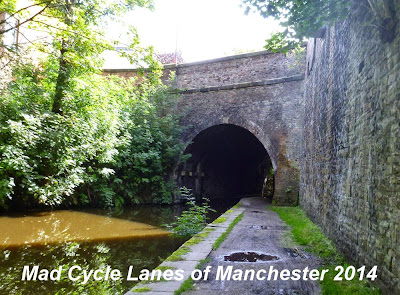 and at this point the character of the canal changes, becoming a little less urban. 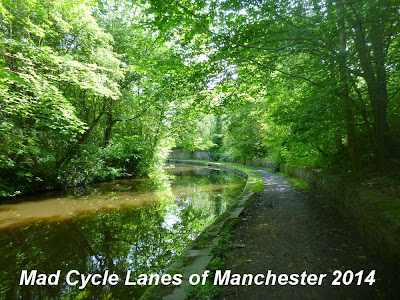 A little further along Ian disturbed this heron on the towpath. It settled on the far bank long enough for me to photograph it. 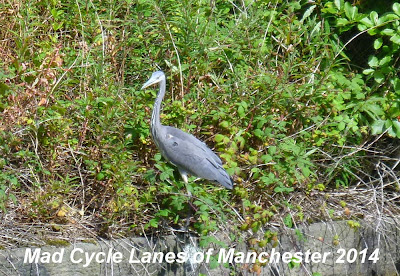 This pink, pedestrian bridge is at the end of Potteringer Street, and is the start of the final section of the canal. 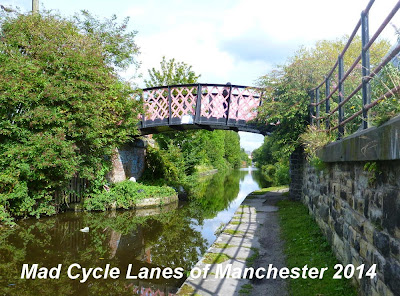 This little bridge crosses over the entrance of Princess Dock. 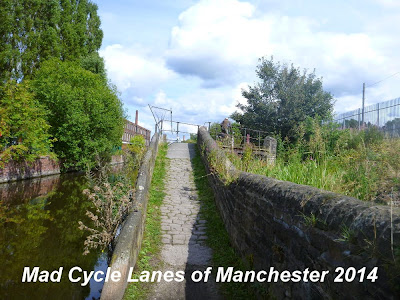 Ian paused for a photo opportunity. 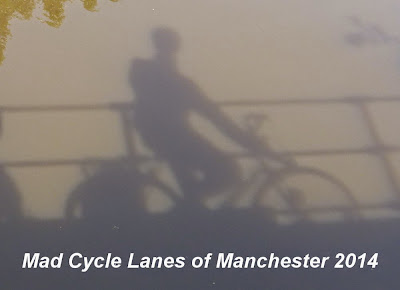 The next bridge goes under Margaret Street, next to the rather spectacular, 210ft high Junction Mills chimney. 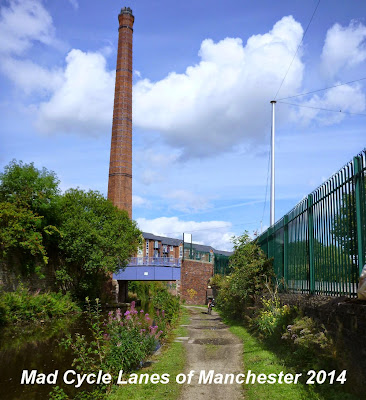 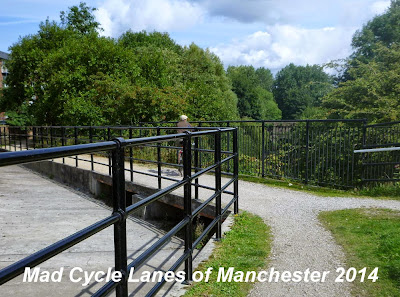 and then heads towards Portland Basin. 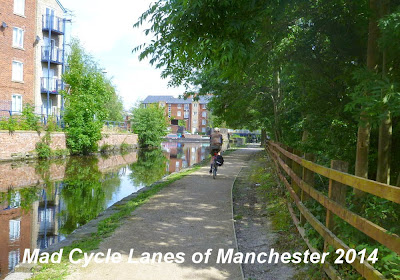 Here the warehouse was destroyed by fire in 1972, but has been rebuilt to house the Portland Basin Museum and, most importantly for those cycling or walking, the Bridge View Cafe. 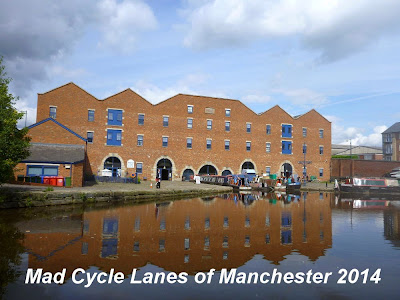 A cobbled bridge takes the towpath over the entrance to the Peak Forest Canal. 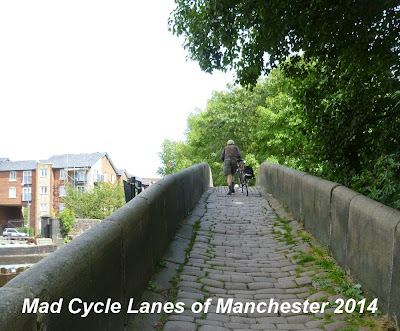 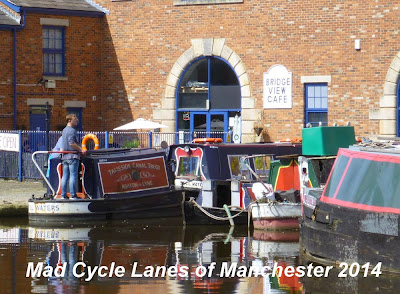 you will have to carry your pedal cycle up this set of steps and down more steps on the other side. 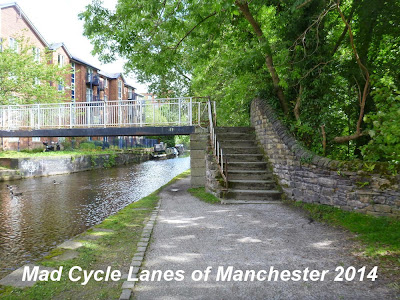 Beyond the foot bridge there are more moorings 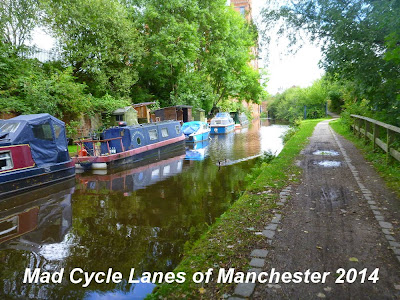 and then the path is blocked, forcing you up this ramp. 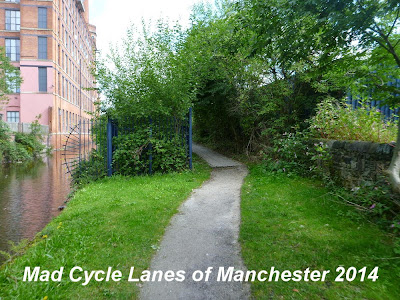 This ramp emerges on Cavendish Street, opposite the Asda Supermarket which has been built across the start of the Huddersfield Canal. 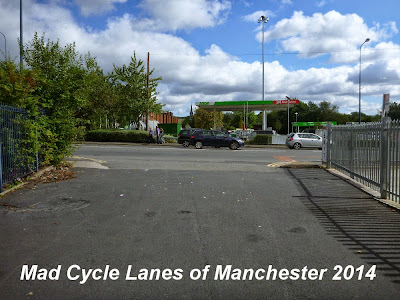 This point effectively marks the end of the Ashton canal. From here the road system is pretty dreadful. The centre of Ashton has a dreadful one way system which is simply dreadful for cycling. From here it is possible to cross the town centre to reach the NCN 626 railpath to Oldham, but me and Ian ended up walking most of the way.


View Ashton Canal 4 - Fairfield to Ashton in a larger map