Unfortunately this isn't available on either the council or TfGM's web site at the moment. The proposals can be seen here.

The key areas and issues from the consultation were the huge support for the ‘Dutch-style’ cycle lanes along Oxford Road and there were requests to see similar schemes across Greater Manchester. There was also support for improved bus access and services that will cross the city and for improved connectivity to key destinations along Oxford Road, including the universities and other sites.

There were concerns from private hire taxi firms who don't like being excluded from Oxford Road, about the impact of displaced traffic on parallel routes and access for delivery and parking, both on-street and disabled.

Generally TfGM seem very happy with the response to the consultation with overwhelming support for the scheme, particularly from people who want to cycle on the route.

However, then came the not-so-good news. It seems that the proposals for the "Dutch-style" cycle provision are not set in stone yet, and TfGM may be looking for compromises in the design rather than creating an iconic, high quality, visually attractive route that will live up to the ambitions of Corridor Manchester Partnership and the Corridor Strategic Plan 2020 and raise the status of utility cycling in the city.

Whilst the stated ambition is ‘Safe, segregated cycle lanes, minimising conflict and maximising opportunity’ and they are planning to engage user groups to develop the optimum design solution, you may note the use of the term "cycle lane" rather than segregated cycle route.

Sadly TfGM seem to be focused on the design of bus stops with bypasses rather than looking at the cycle route design as a whole. The design proposals are for "On-Carriageway Segregation" with bus stop bypasses not high quality Dutch style provision with full segregation provided by kerbs, cycle parking, trees and other infrastructure as seen in the video here. There is a route about the same width, if not narrower with bus stops about 7 minutes in.

And if you want to see the best of Dutch infrastructure where there is space here is what has been built around the University of Utrecht (speeded up).

So the proposals from TfGM seem to lack ambition when it comes to achieving high quality segregation and they make comments about confident cyclists being able to use the road, which suggests that only timid cyclists will want to use the cycle provision...

The cycle route widths quoted are very disappointing too. Rather than planning for a 2.5m or 3m wide cycle route, they are planning on only 2m wide, narrowing to 1.5m behind the bus stops. The narrow cycle routes will increase the conflict with pedestrians and make it difficult to pass other people.

The standard width for one way cycle paths in the Netherlands is a minimum of 2.5 m ( 8′).

As for the options being considered by TfGM for this "On-Carriageway Segregation" they are somewhat disappointing: 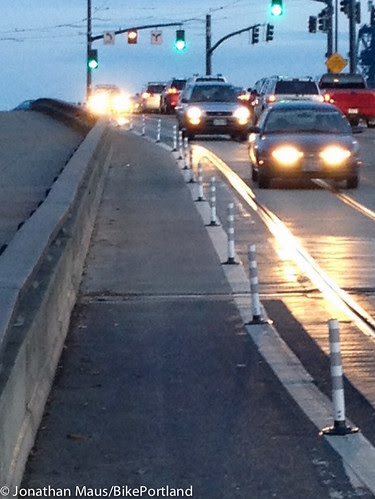 (The drains in Oxford Road really do need fixing!)

I will post separately about the problems with most of these options. As well as being visually unatractive there are also problems with their lack of robustness.

TfGM are planning on holding "design workshops" in the early new year with pedestrian groups, cycle groups (cycle Forum), disability reference groups and Corridor Manchester Partners. It will be essential for people to get to these workshops with good ideas to ensure we end up with a good functional and long lasting design for Oxford Road. Cycle campaigners need to ensure a high quality design for Oxford Road which has the capacity to cope with a big increase in cycle traffic. We also need to ensure that last-minute changes don't allow delivery vehicles in to the area and block the cycle routes.
at 18:05