A second map has appeared showing the Irwell River Path as a cycle route. The map is called Getting to Salford Quays and MediaCityUK and shows tram, bus train,cycling and car options.

Like the Heritage Cycle Trail map, it does not mention the locked gates on the Salford section, and it also shows a very strange route along the Trafford section, probably reflecting the route as it would have been about a year ago. 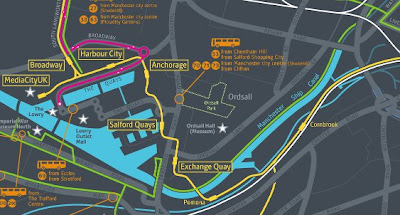