A meeting was held on 16 December was held at Manchester Town Hall to discuss impact on cycling of the plans for the Metrolink second city crossing. This meeting had taken over 3 months to be held, and this seemed to be deliberate delaying tactics. The initial introduction from Ian Graham of Metrolink made it pretty clear that this meeting should have actually taken place nearly 3 years ago. Indeed the tracks are already being laid so all this is far, far too late. 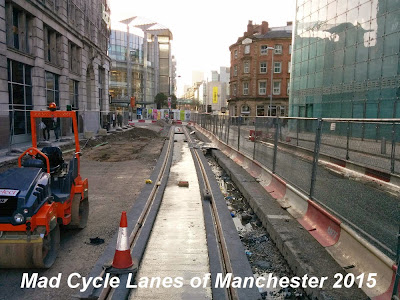 It seemed as if TfGM and Metrolink had originally planned to ban cycling along the whole 1.6km of the route, but had been told at the last minute that this wasn't a good idea as Manchester is trying to give the appearance of supporting cycling. As a result of this change of heart they have decided allow people to cycle along Cross Street and have made some minor changes and redesigned the Exchange Square platform layout. However, it soon emerged that cycling will be banned in many other ways and the impact of the Second City Crossing will be to make drive even more pedal cycles out of the centre of Manchester.

The headline is that, unlike in Mosely Street, cycling will be allowed within the swept path of the tram. However, the reality is that there is only a one meter gap between the left hand rail and the kerb, so if someone steps of the pavement in front of you, swerving to avoid them will force you into the rail slot and probably result in you ending up on the floor. In other words there won't be space for safe cycling along most of the route, and quite frankly TfGM/Metrolink don't care.

There are the usual comments about all cycle crossing of the tram lines will be at an angle of at least 60 degrees, but in practice this ignores many cycle maneuvers and where cycle crossings have been designed, they involve sharp rightangle bends on bits of pavement, so you will be better off walking.

So, as the meeting was quite chaotic and heated at times, my notes weren't necessarily comprehensive. However, here is a list of the main problems I noted, though there are many more dangers in this scheme:-
The other piece of bad news is that there is no safety approved gap filler for tram tracks in the UK so it will be many years before any solution is found to that problem. Meantime, because I regularly cycle in the city centre I am very tempted to buy a tricycle...