A classic piece of crap cycle "infrastructure" in Chorlton on Manchester Road. Just direct the bicycles onto the rather poor piece of pavement that is narrowed by trees. 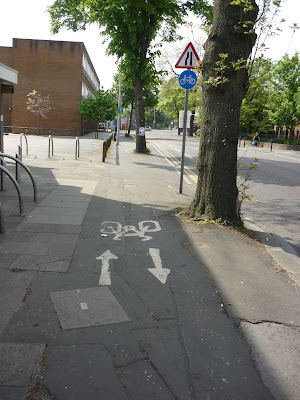 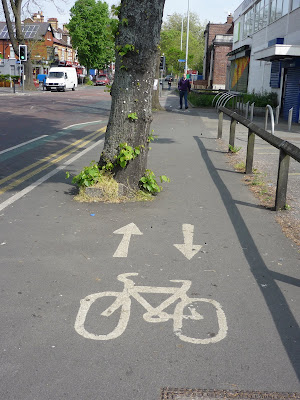 Notice how northbound you are directed into the tree. One wonders whether that was the intention of the route designer or whether (s)he couldn't care less.

In between the two trees going south is also the start of a cycle lane on the road...

Update: Sharp Edge Trip wrote this rather more comprehensive report last August about the same spot, with a better photo, and links to this article in the South Manchester Reporter

Residents have hit out after pavements on a busy high street were turned into cycle paths.

Signs appeared indicating that walkways on Manchester Road in Chorlton had to be shared with bike users.

But residents claim the move has made the pavements a hazard, saying there is not enough room for pedestrians and cyclists to share the pavements.

One mystery person has even taken the law into their own hands and sprayed over the markings with black paint, which has since been cleaned off by council staff.

P.S. On the Manchester Cycling Map this section is marked as "Traffic-free routes with a good surface that can be used in all weathers". A case of lies on the map....