United Utilities are about to close the junction of Liverpool Road and Water Street from the middle of August 2013 for approximately 8 months.

This is part of National Cycle Network route 6. It is a busy cycle commuter route and links to Princes Bridge. 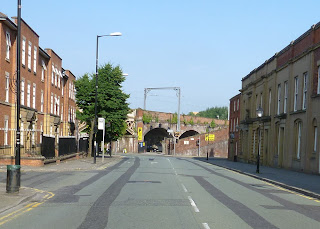 The reason is a large amount of work to improve the sewers.

"When it pours down in Manchester, the sewer system can quickly fill up with rainwater. Once the sewer pipes are full, this water, containing diluted sewage, has to go somewhere and at the moment spills into the Manchester Ship Canal... We will be installing an underground chamber with filters, to block out items that should not enter the Manchester Ship canal on those rare occasions that the sewers do overflow."

I spoke to the team from United Utilities when they were on site and they are only planning to close the road itself. The pavements will still be open. However, they did not know whether there are any plans to allow people to cycle on the pavement instead.

However, on a positive note, the closure will make Liverpool Road a much nicer cycle route without all those drivers rat-running through the area. That is if United Utilities remember to block the rat run via New Elm Road and along the cobbles on Potato Wharf. If they don't there will be colisions at the junction of Liverpool Road and Potato Wharf and the cobbles will just get ripped up by the heavy traffic.


View Closure of NCN6 in a larger map