Manchester Sky Ride is unfortunately becoming an annual reason for drivers and shoppers in Manchester to resent cycling. On the 15th July lots of roads in the city will be closed off so that News International can plaster the city centre with banners advertising for their UK TV wing, BSkyB. 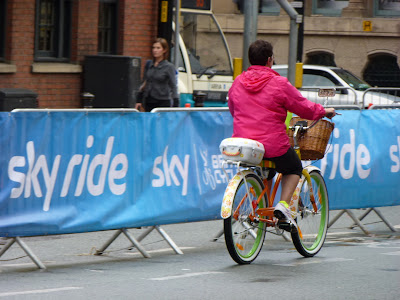 The route is extensively barriered too, so shoppers have to walk miles to get to their destination and drivers have someone, other than themselves, to blame for the traffic jams in town. There is nothing interesting to look at most of the time. It is not as if the city is hosting the finish of a bike race or a bike parade like the rather wonderful Manchester Day. 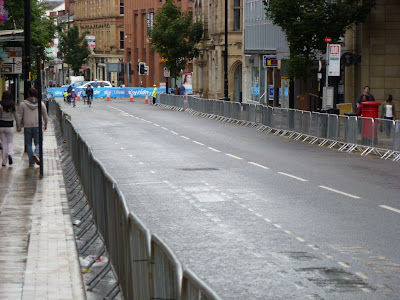 Sky Ride is one of those events where lots of drivers strap bikes onto their cars and drive into Manchester so they can have a few hours cycling in the city centre, dressed up in helmets and ugly yellow advertising bibs before driving home again to their car-dominated suburbs where they hardly ever cycle. Far from improving the image of cycling, it promotes the idea that cycling is dangerous and strange. 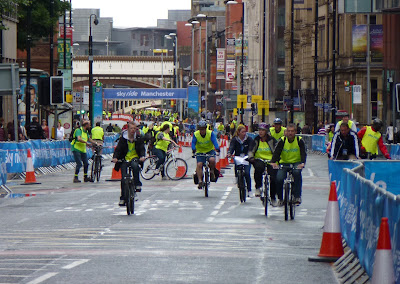 Sky ride is a fine example of transport tokenism as the council spends ten times more money on funding sports facilities for British Cycling (funded by Sky and car firm Fiat) than it does on making the streets of Manchester attractive for cycling. After all this Labour council would not dare risk being seen as anti-motorist. I am waiting to find out just how much this event will cost the City Council. UPDATE: FoI request sets the city council's costs at £72,000. 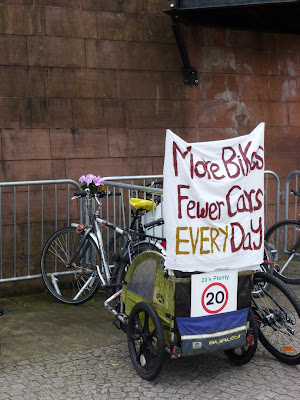 Last year it was a relief to see that a few people struck out against the corporate crap and got to the point with banners pointing out the problem. Let's hope the message gets out more strongly this year.

As well as these one off events, why can't the council close Deansgate to motor vehicles every weekend? It would make the place come alive with people rather than being a weekend-long traffic jam. 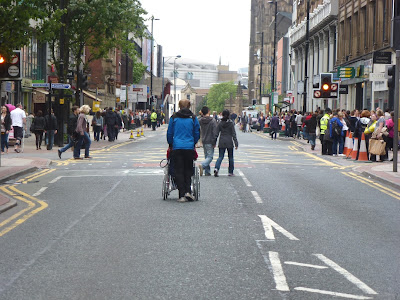