The Great Manchester Cycle will take place on Monday 4 June 2012. It looks like a trial of a new innovative congestion charging scheme for bicycles in Greater Manchester. On the day cyclists will be charged a whopping £28 each to cycle a fixed route around Manchester, Trafford and Salford.

All cyclists using the route will be also required to wear wear a cycle helmet that is Snell, CE or ANSI approved and must keep above minimum speeds of 7mph, 13mph or 18mph depending on how many laps they ride. 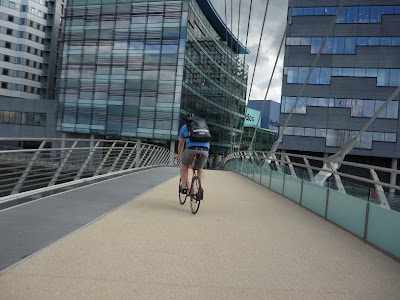 The web site however doesn't say whether the entire route, including access points such as the MediaCity footbridge will be closed to non-paying cyclists. Something that would seriously inconvenience cycle commuters in the area.

Looks like another bad idea from the BCF and MCC.

Just imagine the outcry if Manchester City Council proposed charging drivers £28 per day to use the Mancunian way...
at 20:55