Over the past couple of weeks I've been hearing about the new Manchester Cycling Lab and seeing one of its members out in the field doing research. Dr James Evans and Gabriele Schliwa are setting up the cycling lab at Manchester University to do research into the state of cycling in Manchester. The work began a few months ago and is being funded by the Economic & Social Research Council. 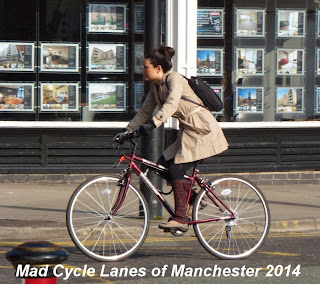 I met Gabriele at last week's GMCC meeting and again at Manchester Cycle Forum the following day. The project sounds very exciting. It will look into the impact of the Velocity 2025 project and others on the level of cycling and the routes people chose for cycling. The idea is to turn Manchester into a living laboratory for the study of cycling, harnessing the knowledge and capacity of the University to support a cycling transition.

As someone who works in a research field myself I think this is very exciting news for the city as it brings the prospect of good quality, objective data being gathered about the impact of Velocity and the Oxford Road improvements are installed.

The team are going to be at two special events next month:-

The University of Manchester Bicycle Users Group (UMBUG) is celebrating reaching 1000 members with a special event at 4.30pm on Thursday April 3 outside University Place. http://umbug.manchester.ac.uk/

Cities@Manchester is hosting an urban forum exploring the issues raised in this article on Tuesday, 8 April, 6-8pm at the International Anthony Burgess Foundation. http://www.cities.manchester.ac.uk/events/