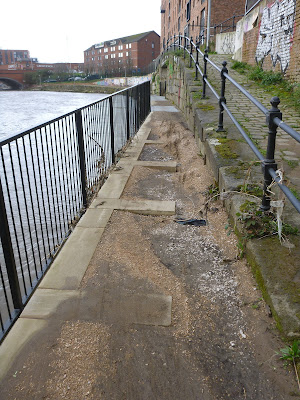 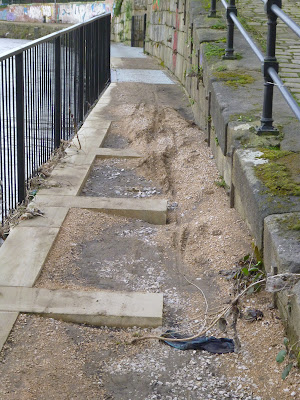 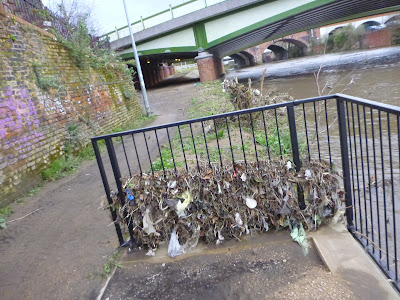 Yesterday I saw this group of youngsters riding down Deansgate. 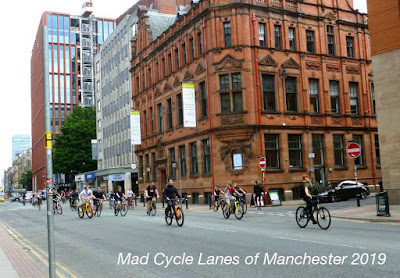 They were pulling wheelies from time to time. 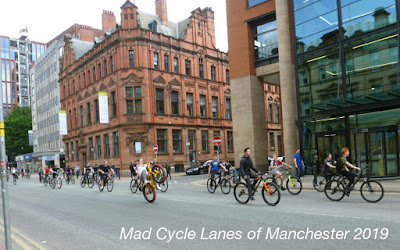 The group was mostly male, 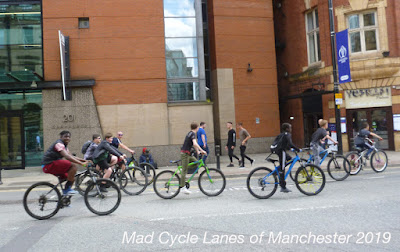 So I'm assuming it had nothing to do with the recent climate protests or Clean Air Week... 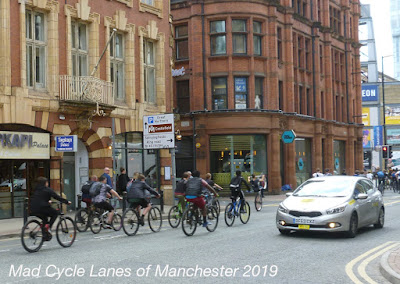 The public consultation Manchester City Council's proposed Chorlton Cycleway is now open and will close on the 11th January 2019.

Comments can be made via the link on the webpage.

Concept plans for the new Chorlton cycle route have been released to the local press and were featured on local TV this morning. 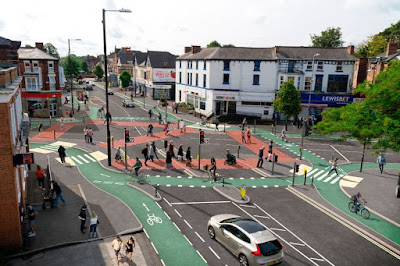 The key feature from the images in the MEN is that the junctions appear to include separate cycle phases at the traffic lights. This is a huge improvement over the Oxford Road corridor where the junctions are dangerous.

Another poorly publicised TfGM transport survey - this time about the city centre.

Time to ban the motor vehicles...! 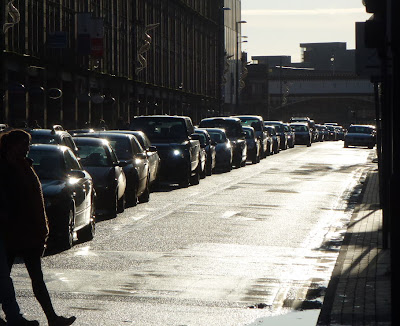 
The Ellenbrook Loopline is a short 1.4km rail path from the Leigh Guided Busway at Newearth Road to the Roe Green Loopline, east of Parsonage Road. There has been a path of sorts here for some time, but it never seemed worth a post as it was in very poor condition and was blocked at the western end. However, Salford council upgraded the path last year and the path now makes a useful and usable link. 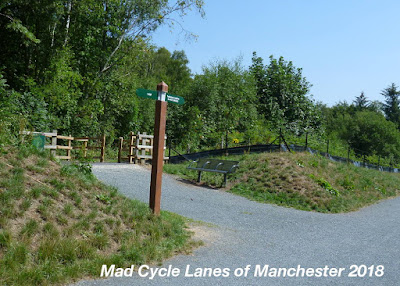 The entrance off the busway path is well signposted and marked with clear signage, though it is debatable as to how long these will last, given that some have been vandalised elsewhere. 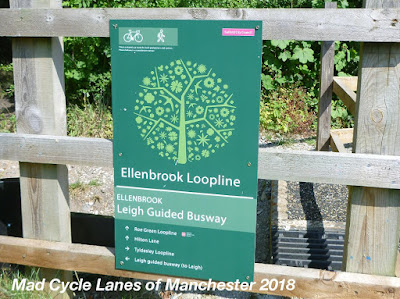 There is a token barrier as you join the path, but nothing too difficult for a bike and trailer or trike. 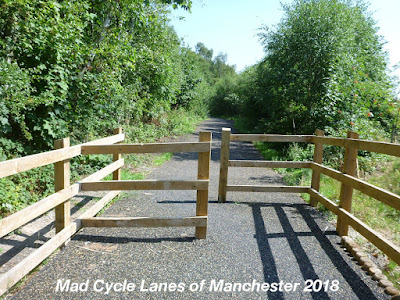 The first striking thing you notice when you join the path is the surface, it's fantastic!

Compared to the grit strewn, noisy, uneven busway path this is a delight. It is 50% recycled tyres and so quiet. It is also slightly soft and very grippy, so far, far safer than the dreadful surfaces covered in grit. It also has a well laid, even finish and looks like it is porous, so water can drain through it.

This should set the standard for all new rural cycle routes! 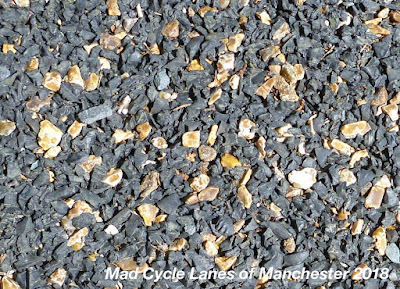 The route starts on the old railway route, 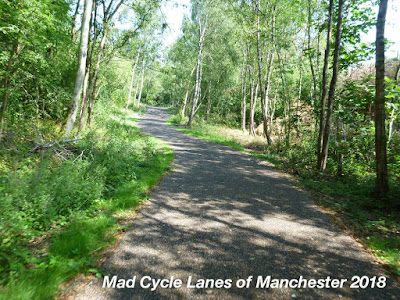 but drops off the line of the railway on the approach to Mather Fold Road. 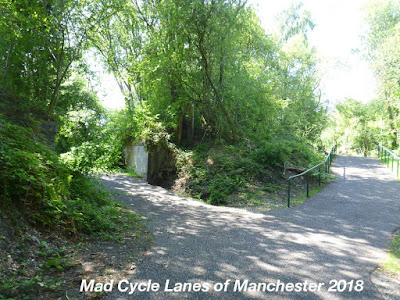 Here there is a bit of a diversion round the gates close to the old Valve House - left of the photo below. 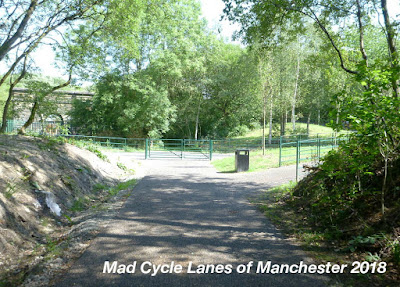 Again there are barriers, but not too much of a problem. Then back up onto the railway route. 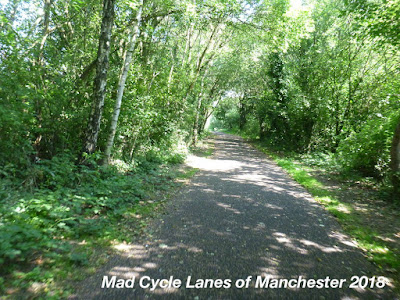 However at Hilton Lane there is a missing bridge, so the path drops quite sharply to road level. 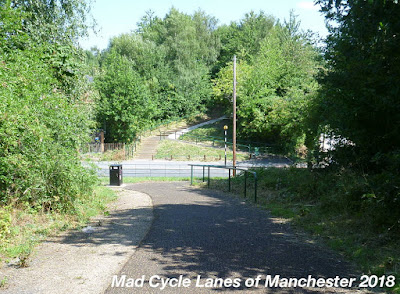 A somewhat odd combination cycle/pedestrian crossing doesn't feel particularly safe and not sure about it's legal status... 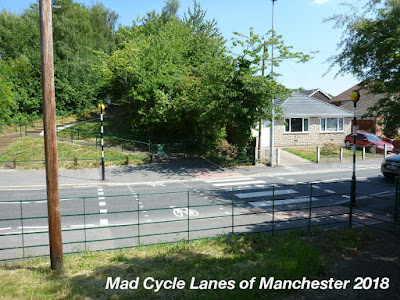 On the other side of the road the gradient is really steep. According to the plans this shouldn't be any steeper than 1 in 12, but with a sharp corner half way up it's a bottom gear climb or get off and push, with steps for walkers. 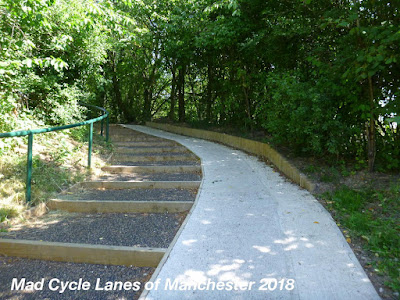 Next the bridge takes the path under the railway, 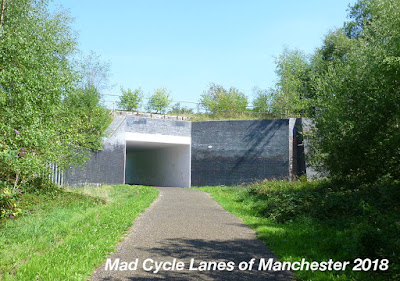 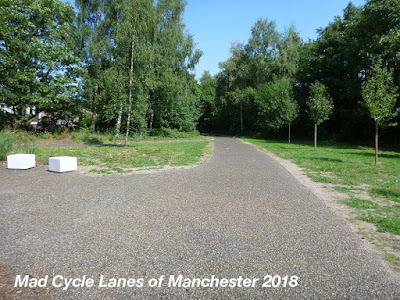 and curving round to the left to join the Roe Green Loopline. 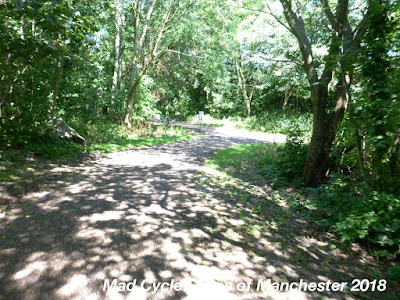 The entrance at this end is marked by another of the large rectangular sign. 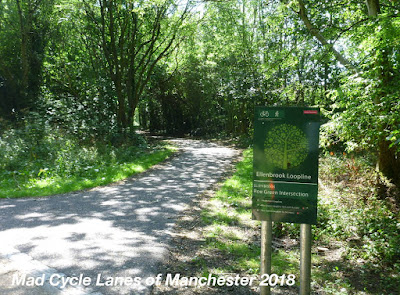 The upgrade has turned a difficult muddy route into a useful short link with a fantastic surface. It's so quiet you can enjoy the sound of the birds as you cycle along.

A couple of ideas from Edinburgh...

I came across a couple of nice ideas from a recent visit to Edinburgh.

The first is some driver awareness education around advance cycle boxes. 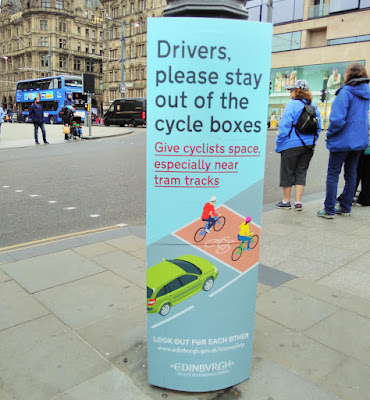 Whilst I remain skeptical about the effectiveness of such measures the general effect of making drivers aware of cycle infrastructure is probably a good thing. 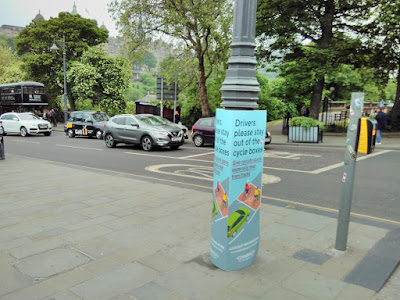 The second think I came across was a smart, well designed little booklet advertising the Edinburgh Festival of Cycling. 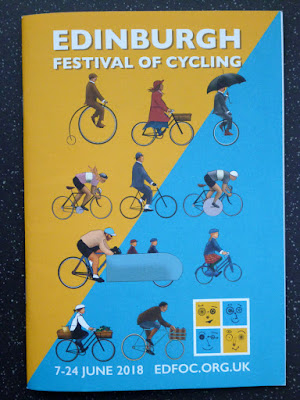 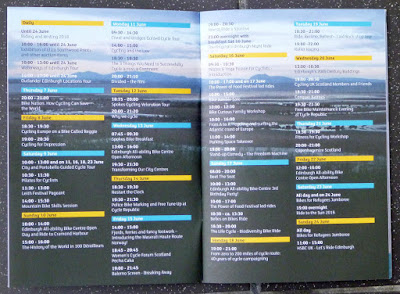 It also has a really good web site.

It would be good to see something of this scale in Greater Manchester...