Will You be Promoting Murdoch's TV Company?

With the Murdochride coming up soon, it is well worth putting this kind of event into perspective.

Here's a view from the Ealing 2010 ride by velopoly. I found it whilst searching for more Brox related information.

I’m pretty sure that Sky don’t actually give a flying toss about cycling either – I think it’s more that they realise that they can get a lot of value for money sponsoring what was formerly known as the London Freewheel. Everyone gets a luminous yellow bib emblazoned with their logo and even misanthropic bloggers like me end up referring to the day as the “Skyride”. I don’t know about you, but every time I call it that, I get a little bit of sick in my mouth.

Why don’t I like it? Well, I suppose mainly it’s because I don’t like the implication that riding a bike is a leisure activity that should only be undertaken on closed roads, whilst wearing hi-viz and a helmet, under the strict control of a bunch of marshalls. It’s selling a complete lie of course, but thousands of families seemed to be buying into it. Actually, if there’s one day when it wasn’t necessary to make your kid wear a helmet, it was probably today, but that’s another argument all together.

Further barriers on the Fallowfield Loop

Just when you thought there were enough stupid barriers on the Fallowfield Loop, the situation gets worse... 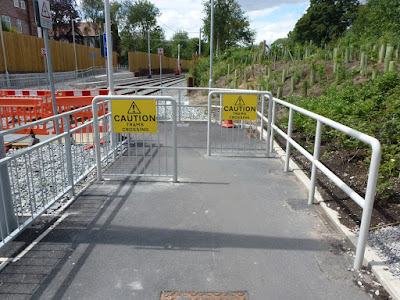 The above photograph was taken by me on 26th June. 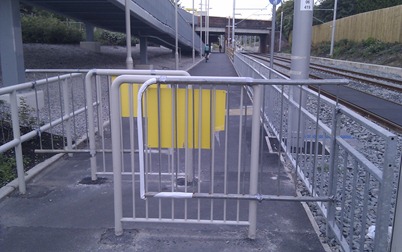 Just how much money was wasted on repositioning these barriers to make matters even worse for cycling? The people who did this are actively discriminating against people who through disability or choice ride non-standard cycles.

Manchester City Council and Transport for Greater Manchester are clearly failing local people who wish to use this route for cycling. Sustrans, however, should and does know better.

One further thought - these barriers are not here to stop motorbikes or cars, they are trying to enforce the Cyclists Dismount signs at the tram crossing. Perhaps they have been moved because some people have been able to ride round the barriers...

Well there is a solution which does work and enables full acces for non standard cycles. It is in use on the Bristol to Bath Railway Path - spring loaded gates. 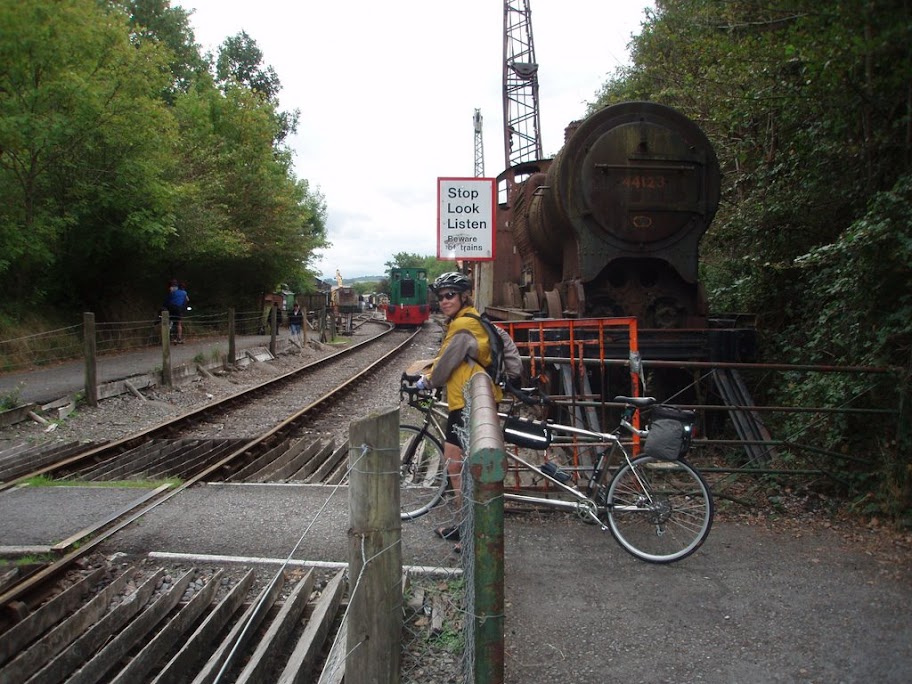 A tandem negotiates the gate (painted orange) on the Bristol to Bath Path.

The new online Cycle maps covering Greater Manchester turn out not to be quite as new as you might expect. Only Rochdale, Oldham and Manchester have produced updated maps this year, all the others are last year's version.

However, even the new updated map of Manchester omits one of the most useful traffic free routes along the River Irwell, as featured in this map. So even the updated maps don't feature some of the best routes, whilst showing some lies on maps that don't match the situation on the ground. 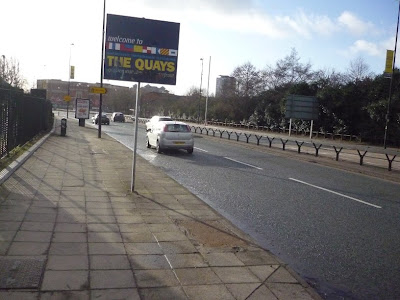 This poorly maintained pavement in Salford is marked as a "traffic-free" cycle route on these maps, despite there being no evidence of any cycle infrastructure on the ground.

There are a few sculptures on the Fallowfield Loop cycle path. Unfortunately none of the leaflets give their locations or origins, so here's my record of them and any information where I can find it. Click on the images to see the locations.

More information about the project

The only Sustrans Milepost I noticed.

from the Friends of Fallowfield Loop Newsletter

The stone sculptures situated between Princess Road and Athol Road were originally funded from a grant for the improvement of the A6 corridor, and had simply been ‘parked’ in their original site. The team has now moved them to where they belong, apart from the heaviest one which has had to be left where it is. A site has been arranged for the four animal sculptures between Slade Lane and Errwood Road, and brick and stone plinths have been constructed to give them high visibility to passers-by.

And finally the one sculpture which does feature in a leaflet, but I can find no other information about it on-line.
at 19:37 No comments:

Odd one this, a leaflet contains lots of get-off-and-walk-on-the-pavement stuff, but is the first map to show how to get round the missing bridge on the Irwell River Park route. 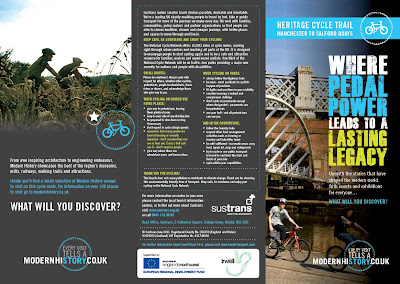 If you ride the route it gives views like this. 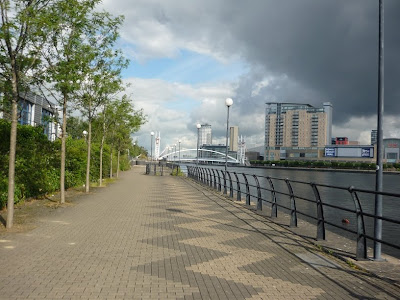 Pedal MCR opened for business on 9th July in the Boathouse in Platt Fields Park. It is a lovely location for a bike project and a colourful haven inside for all manner of things bike - accompanied by tasty vegan food. Congratulations to Nes, Rob & Ed and all the volunteers who've made it happen. 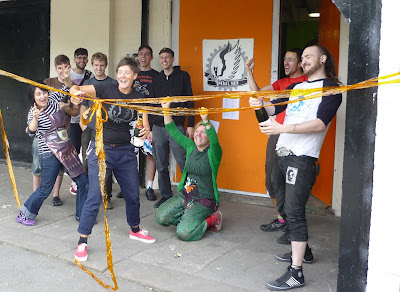 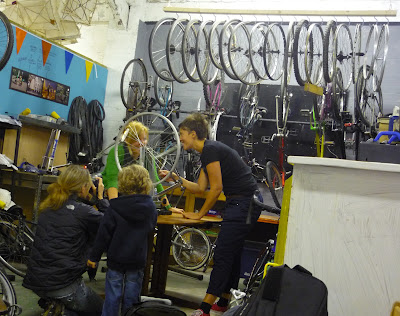 The MEN taking photos in the workshop. 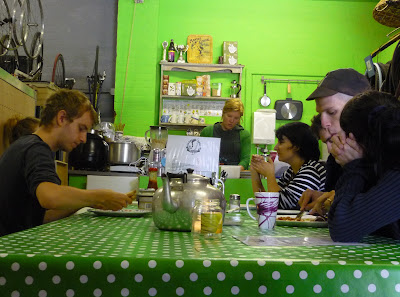 And tasty vegan food being eaten in the café area.

For a full list of activities visit the Pedal MCR web site.
at 12:33 No comments: 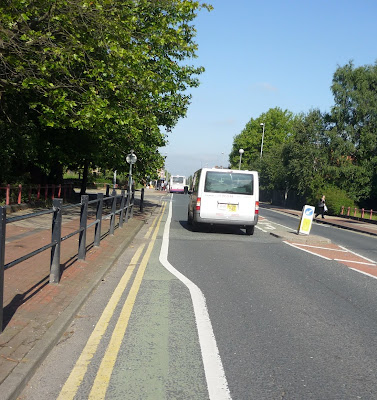 Given the useless nature of most barriers on cycle routes, one begins to wonder who makes money out of this crap? 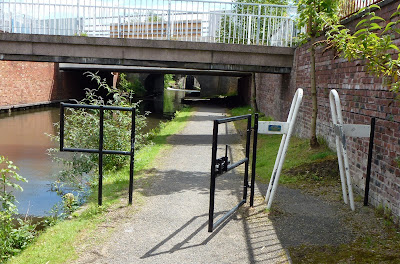 A closer inspection of the barriers can give a clue to the answer - the motor industry!!! 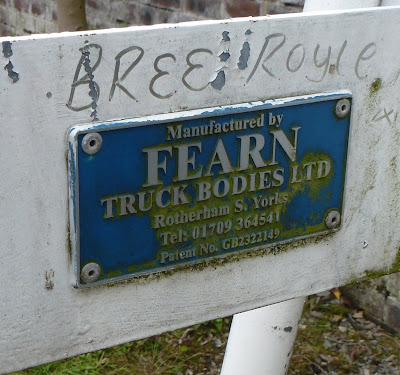