It is often hard to find out what has been going on with the Vélocity 2025 project. Not least because Manchester City Council and TfGM seem to have re-branded it as "Better by Cycle".

However, a report on the Cycle City Ambition Grant to the Manchester City Council Neighbourhoods Scrutiny Committee has been published on the council's web site and gives the latest news on the routes. The meeting will take place at 2pm this Tuesday the 10th of February in the Scrutiny Committee Room on Level 2 in the Town Hall Extension

The purpose of the report is to update members on the progress of the Vélocity 2025 project and the delivery of the first phase of investment that is funded through the Cycle City Ambition Grant (CCAG).

The document is worth reading through to get all the details, and the attitude conveyed. However the headline news is on page 40.

6.8 As with each of the other cycleways, the proposed Prestwich Cycleway was subject to extensive consultation. However, unlike the other cycleways, this route garnered very little support. The principle concerns were that it didn't go where cyclists would want to go and that the proposed leisure route was unlikely to encourage the take up of cycling, which was a key objective of the CCAG. It was therefore felt to represent poor value for money. As a consequence of this consultation, it is now proposed that the Prestwich Cycleway does not proceed as part of the first phase of the CCAP. 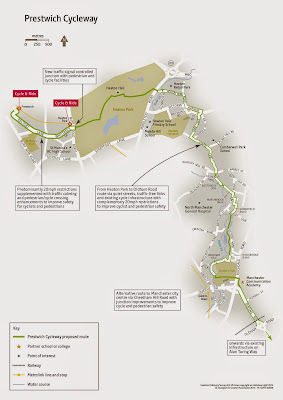 So the Prestwich Cycleway project has been dropped, but the others continue with very little modification. Whilst the Prestwich route was a real dogs breakfast, it wasn't the only route with problems and now this leaves the project with no route reaching into the north of the city.

The other news is what's being bid for next. Whilst the next round of money is going to be spread thinner, across the whole of Greater Manchester, Manchester is still looking for its share...

8.7 The allocation being sought by Manchester City Council is to deliver the following work:

So what are we to make of the three new proposals?

Well the City Centre is currently a mess, almost impenetrable for cycles, and thanks to TfGM/Metrolink getting far worse. However, I doubt that there will be anything like enough money to put right all the damage, and this follows on from the dreadful LSTF plans. 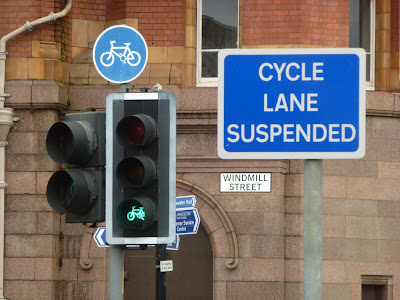 The Upper Chorlton Road route will tap into the highest concentration of cycling in the city, and this route is currently, often full of parked cars, so it does need a lot of work. One thing to note is that this announcement comes just after a letter in the MEN from the three Chorlton Councillors. 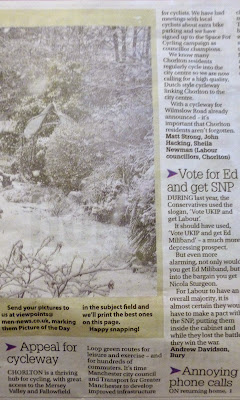 The Rochdale Canal is a bit of a no-brainer. However, like the city centre it will probably take a lot more money to sort out properly. The route is narrow in places and contains several big sets of steps, and in a couple of cases there is no way round for a tricycle or bike with children in a trailer. 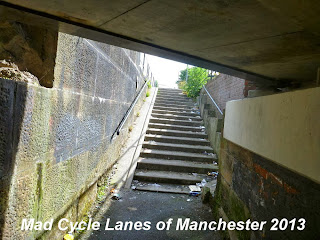 So the chosen projects all make sense, but whether there is the money, expertise and political will to see them through is another matter.