Observations from Amsterdam - the Roads

Last month I spent a few days working at a conference at the RAI centre in Amsterdam. It's a fairly urban part of South Amsterdam and what is striking, at first is the scale of the road network compared to the cycle paths. This road outside the conference centre has 6 lanes of traffic going north and 3 going south with tram tracks down the middle. 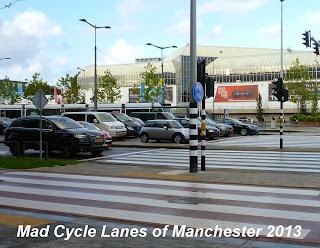 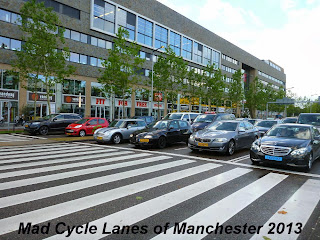 The land use is dominated by the roads, with rail next and the cycle network is on the same scale as the pavements. In some ways it reminds me of main roads in parts of South Manchester. 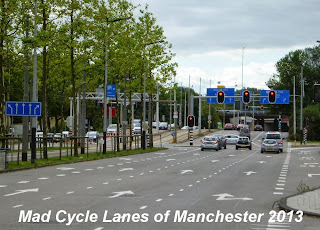 After a while some key differences start to stand out. This 3 lane each way dual carriageway goes into separate lanes for left, straight on and right a long way before the junction. 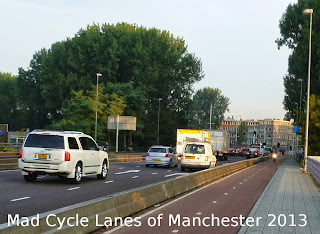 At the junction itself there is clear separation between the priority for each of the lanes with separate traffic lights for each lane. Any driver trying to change lane at the last minute is in trouble and Dutch drivers don't seem to tolerate such behaviour and use their horns to object to such behaviour. 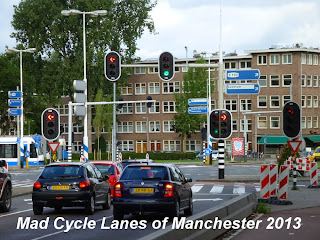 Generally, what struck me was the complexity of the road designs. Drivers are clearly expected to pay attention and get in the correct lane and cope with trams and bikes at side turnings. 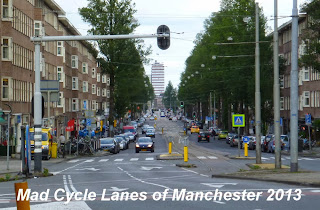 So the differences between Amsterdam and Manchester extend well beyond the cycle routes. There is far more structure and order to the Dutch road design and drivers are expected to conform to this structure. This creates a very different context for the cycle infrastructure to the one here.