A look round the Creative England web site reveals that they are indeed responsible for the film units using this bridge as a film unit base site. This means that the bridge is being used in place of a car park or private land.

Complaints to the council were passed on to Creative England who seem to be responsible for this situation. It seems that my initial hypothesis was right and the permits did not allow the obstruction of the highway:-

Jonathan has apologised to me and has already telephoned the security team who are down at the bridge today to get this issue resolved. I have informed him of the National Cycle Network (Route 6) and the need to leave a clear access channel on the road for cyclists to use at all times. With them having the double yellow line dispensation on either side of the road, this access channel will be down the centre. As you know, Princess Bridge is a dead end so no through traffic will be driving on the bridge.

The vehicles are scheduled to remain at the bridge until Friday 3rd Feb and the location manager has instructed the security team to leave this clear access channel for cyclists at all times and to not be forcing them to use the pavement. Jonathan is also aware that they do not have a road closure order for Princess Bridge so I have told him to remove the tape immediately and any associated traffic management equipment that may give this impression.

Just for your info, the parking requests go direct to Manchester Parking as there are payments to be made directly by the production company. Whereas I do include parking information on my filming applications, this is more to do with a productions technical parking at a filming location and not the unit base information, which is what Princess Bridge is being used for. To be honest, unit bases tend to be within private car parks or private sections of land but it appears that Princess Bridge is providing a good option for productions but I do understand the need to keep the National Cycle Network (Route 6) open.

As Graham has stipulated below and I have reiterated to the location manager, vehicles must not be parked in a manner which could obstruct or inconvenience other road users, which on this occasion has been the cyclists. Hopefully now Princess Bridge is operating in a satisfactory manner for the cyclists but please let me know if this changes at any point.

This morning a film crew encampment had completely closed the road on Princes Bridge. Not only had the caravans and other crap been parked up both sides of the road, but the road had been closed with tape. 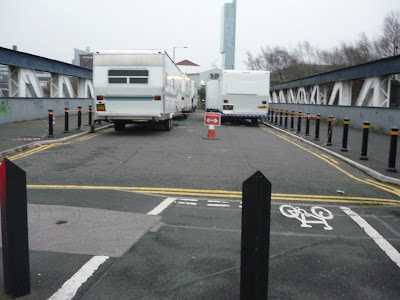 This was pushing cyclists onto the pavement. 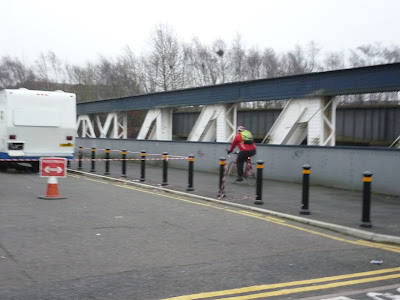 A quick check of the vehicles, before the security guard got too close, revealed that the encampment is for a production called "Bedlam 2" and there were no parking permits on any of the vehicles. Bedlam is a Sky (i.e. News International) production, and Sky couldn't give a shit about cycling!

An email has been sent to the local councillor, and if that doesn't reveal whether this is illegal obstruction then a FoI request may follow....
at 18:45