Then a couple of months ago I went to a public PR exercise by the Network Rail Northern Programme at MOSI about the Ordsall Chord. There I was told that work was going to take place to fix the problems that had been highlighted by Salford and Manchester Councils and these works would be completed by 14th October and on that date Princes Street bridge would be closed and demolition would begin...

So works on the Ordsall Chord are already running over a month late as Princes Bridge is still open. 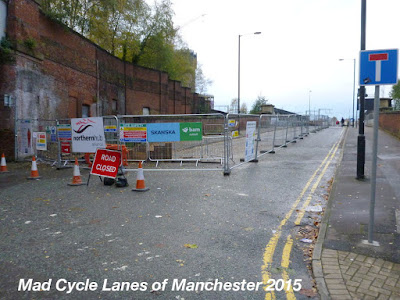 Though works have taken place on the Salford side. 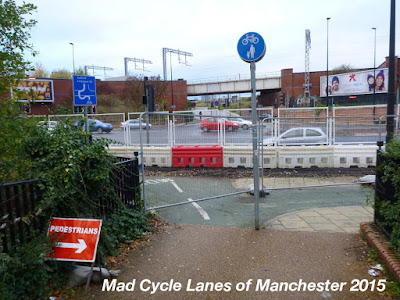 On Trinity Way southbound, the cycle lane is now subsumed into the pavement before the junction. 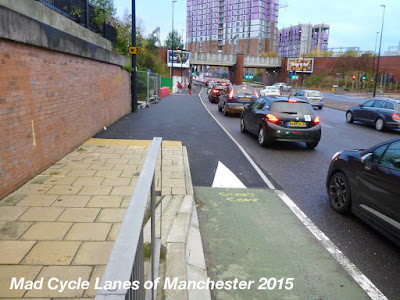 The cycle crossing has been retained, but now without the jug-handle approach and the shared use pavement has been widened under the bridge. 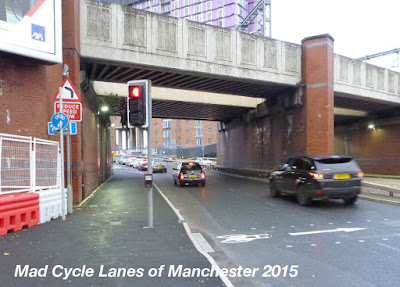 Coming out from under the bridge a new yellow sign directs you back into the cycle lane for Trinity Way, but over the new bridge for NCN route 6. 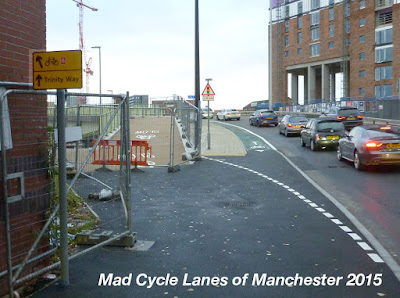 However, the new bridge is still closed. 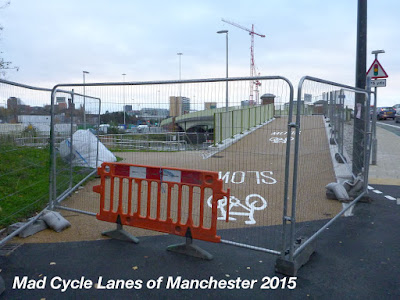 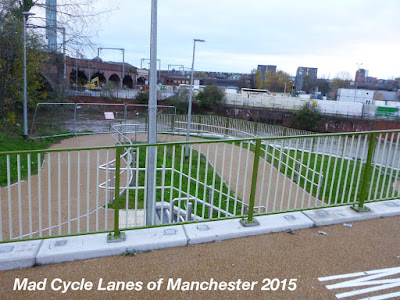 The cycle lane is still open along Trinity way and the pavement has now reopened. 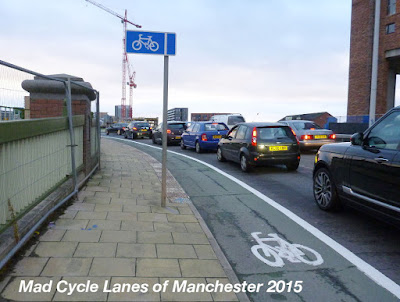 At the other end of the new bridge the pavement has been reshaped slightly, but it is still not according to the original design which would have involved the cost of moving the BT box on the corner. 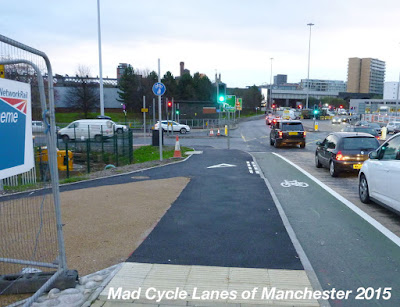 The Manchester end of the bridge is also blocked off. Note the obsession with telling people to slow down! 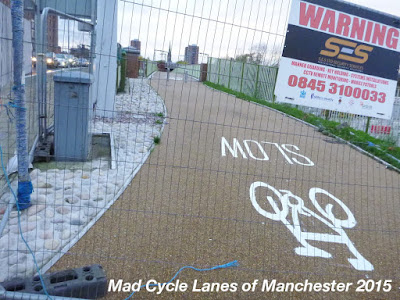 On the corner of Trinity way and Water Street there is a yellow CYCLISTS DISMOUNT sign with room for another sign above. It is not at all clear what this sign applies to. 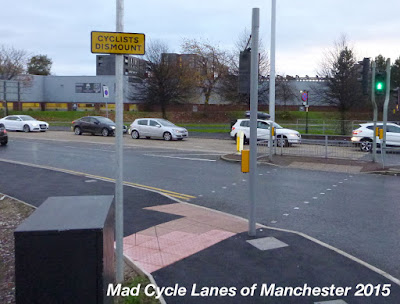 Going left round into Water Street the pavement has been resurfaced, removing the  slippery concrete paving. 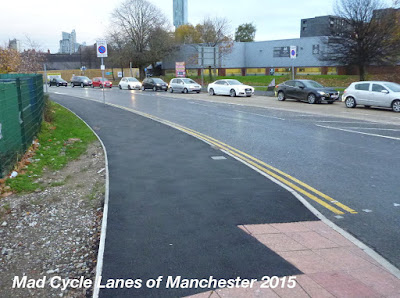 The shared use pavement ends in a right angled turn into a new, narrow cycle lane 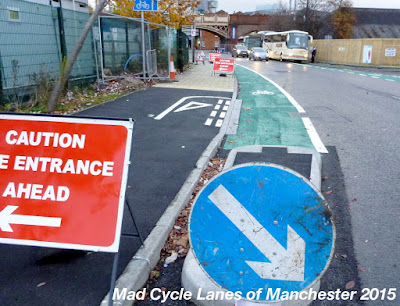 which comes to an abrupt end long before the junction with Liverpool Road. 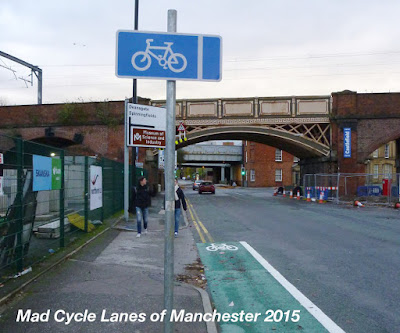 On the opposite side of the road a new and wider cycle lane starts just after the coach parking bays. Though this Moxons coach was parked on top of it. 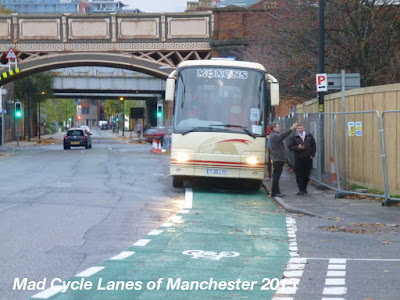 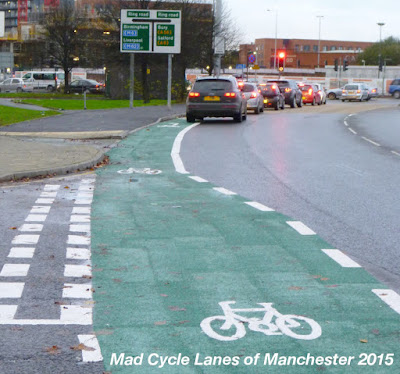 just before the fork left to the Trinity Way crossing. 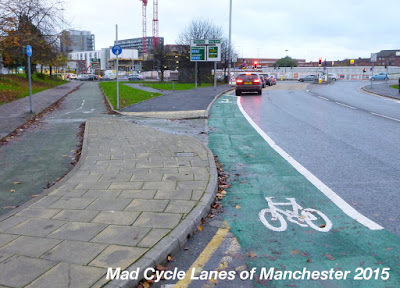 The cycle lane then turns sharp left into the pavement. 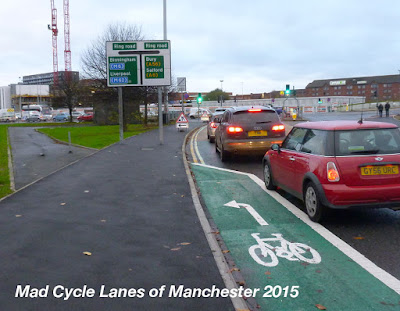 This then takes you up to the traffic lights at Trinity Way. 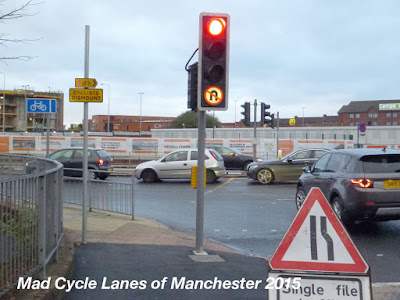 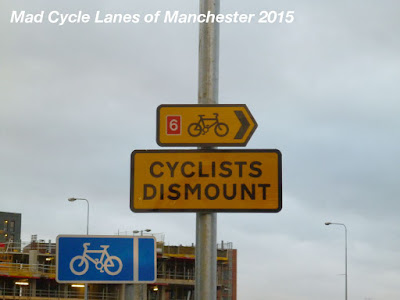 This explains why there are CYCLISTS DISMOUNT signs. Manchester City Council has failed to insist that Network Rail Northern Programme upgrade the crossing to shared use. 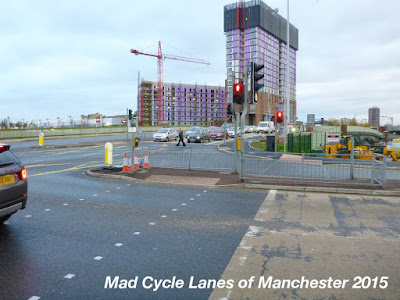 So the diversion of NCN 6 for the removal of Princes Bridge is still a cock up and now features the we-couldn't-give-a-shit CYCLISTS DISMOUNT signs that simply shouldn't be allowed.