This path from Ashton to Hyde along the towpath of the Peak Forest Canal is not marked on the TfGM cycling map for Tameside, but it does appear on the Ordinance Survey Explorer map, marked as a traffic-free cycle route and labelled as the Tame Valley Way. This two and a third mile long section is well surfaced, entirely level and free from cycle barriers along its length. It is a very pleasant bike ride, but slightly spoilt by the smell from the many sewage works along the route. Unfortunately south of Hyde the path degrades considerably.

The Canal starts at Portland Basin, opposite the Industrial Museum which also has a cafe, providing a useful tea stop if you have cycled here some distance. Access from Ashton-under-Lyne town centre is via the Ashton Canal tow path, which slopes gradually down from Cavendish Street, opposite the Asda supermarket, and has no access barriers. However, from this direction you will need to get over the steep cobbled bridge to get to the tow path.

You can't miss the start. 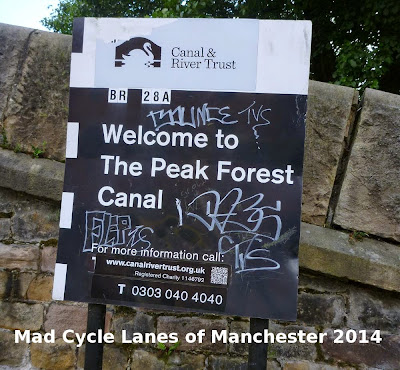 To the left of the sign, go under the towpath bridge and round to the right 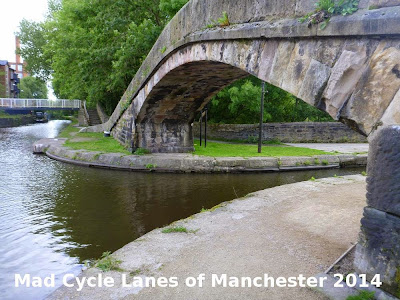 and immediately over the River Tame on a stone aqueduct. On the left is the Portland Basin Marina which is on the Alma Street Branch. 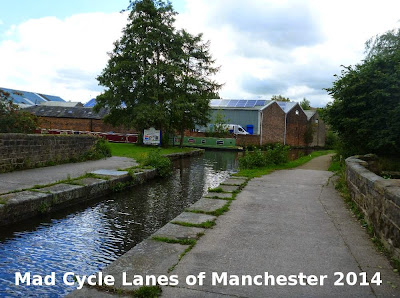 The canal then passes under the ornate railway bridge, the former site of Duckinfield Central station. 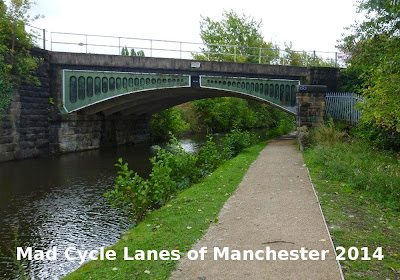 Beyond the railway, the view of the River Tame opens up briefly 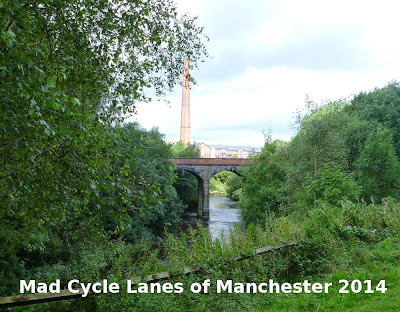 and the path takes on a pleasant rural character. 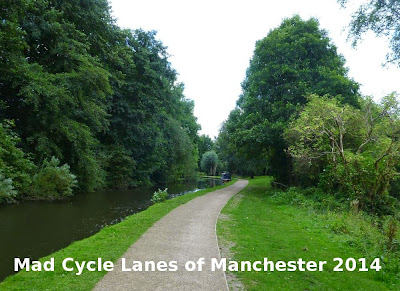 The path is surfaced with a light-coloured tarmac finish that blends in well with the surroundings, whilst marking it out clearly. 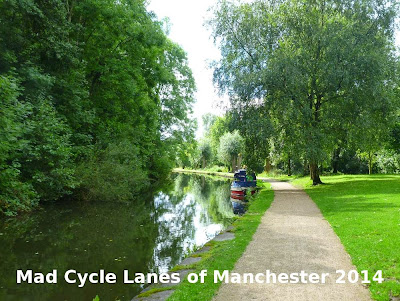 There were a few boats and the occasional angler when I rode the route. 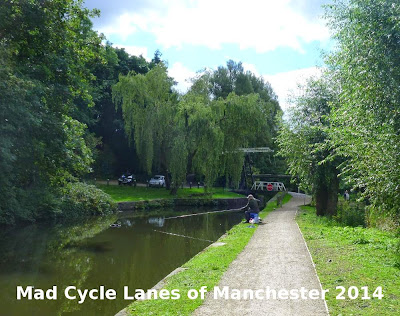 The next bridge is a lift bridge which is the access to Plantation Farm. 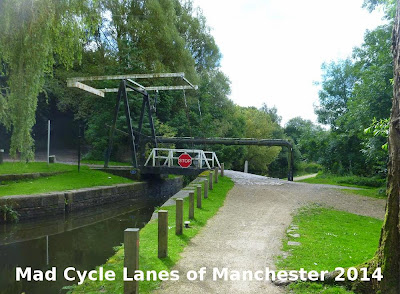 Beyond the canal gently curves to the left 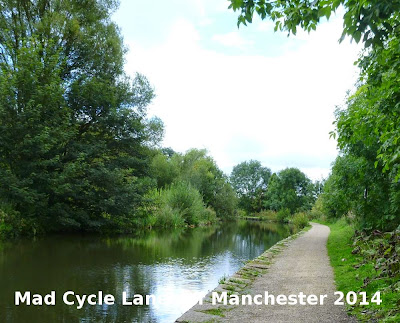 and then passes under another railway bridge. This one has rather limited headroom. 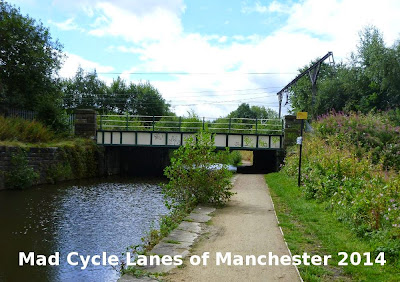 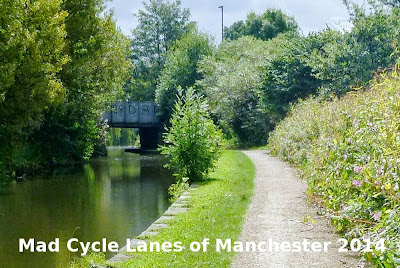 because the path under the bridge is quite narrow and uneven. 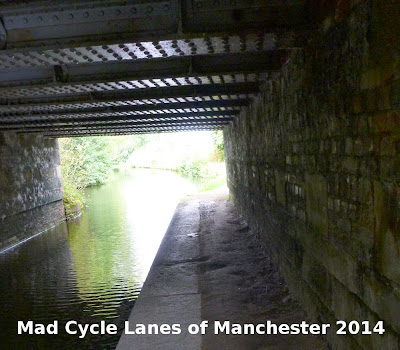 To the right side of the canal you get the occasional view of the sewage works and other industrial plants, showing the rural character is a well crafted illusion. 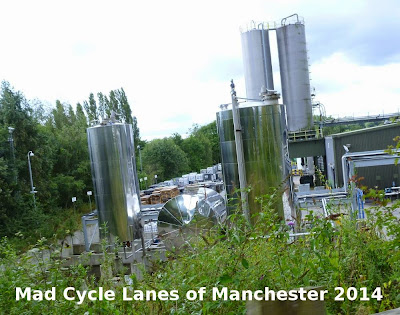 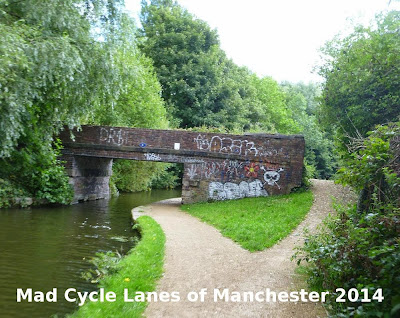 On the opposite bank you pass Warble Boatyard. 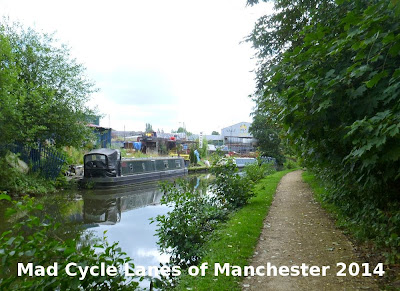 The next bridge gives access across the canal to Newton Hall, a reconstructed 14th century house and on the right is Jet Amber Fields. 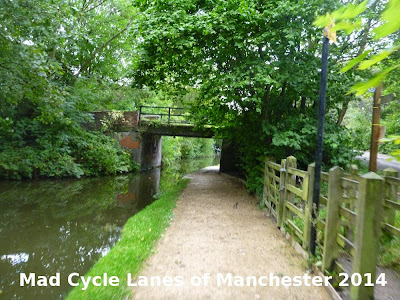 There is a final section of a rural character 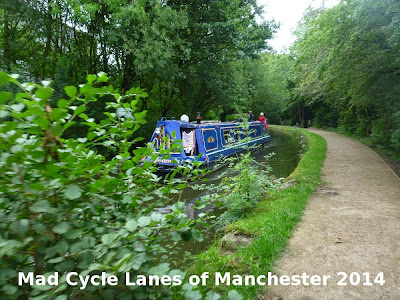 before the canal hits the M67 motorway where it was realigned. 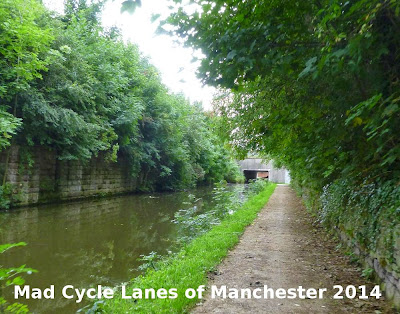 Beyond the motorway lies Hyde Wharf. 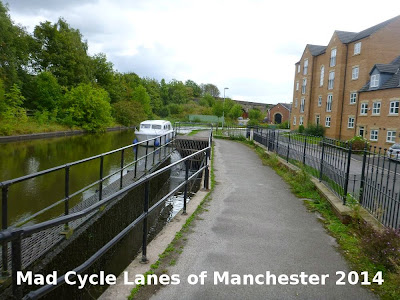 Here the high quality surface suddenly ends to be replaced by a narrow grit track. 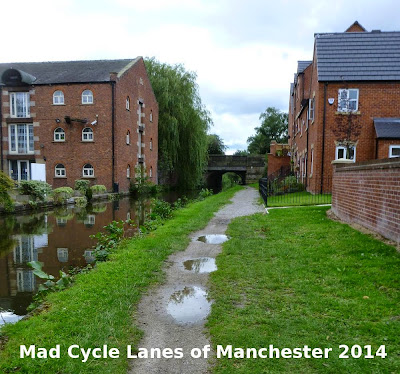 Passing under the Manchester Road Bridge the towpath is sent up and over the canal, though there is now a stretch of bridal way on the other side. 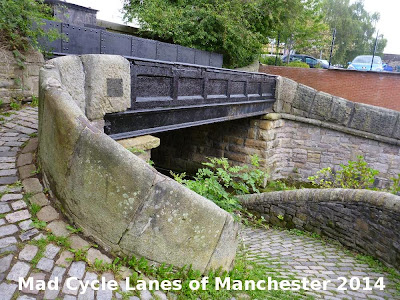 From here the towpath is narrow and unsurfaced 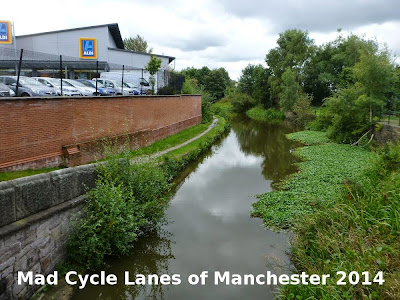 and soon degrades into stretches of deep mud, so it is best to leave the path at Manchester Road, unless the weather has been very dry, or you don't mind getting very muddy... 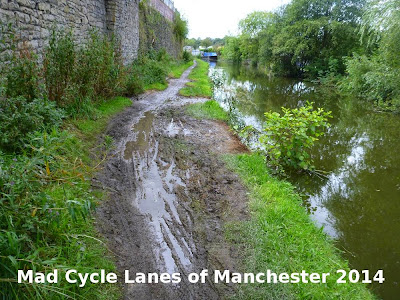