The Oxford Road Flashmob took place nearly nine months ago, a short demonstration of over 100 people with pedal cycles showing just how much we cared about the future plans for cycling in Oxford Road and the wider Manchester area. 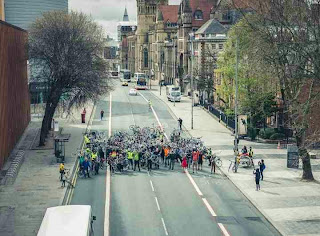 So how are the plans progressing?

It soon became clear that they had only come up with a narrow range of options, many of which were completely unsuitable.

All the way through their options referred to "cycle lanes" not cycle tracks etc, implying on-carriageway provision. For simplicity I will stick to the same terminology in this post...

We were only offered two options, 1.5 metre or 2 metre wide both of which seem too narrow, so I checked my copy of "Cycle-friendly Infrastructure" (1996) which I had taken along for reference.

Now this specifies lane widths as a minimum of 1.5m and 2m wide wherever possible and says that if cycle flows are heavy (above 150 cyclists in the peak hour) 2.5m may be necessary. (11.3.2 pg46)

So I asked what the projected traffic flows are for Oxford Road. The reply was that they were already around 200 in the peak and were projected to rise to around 600. So it is clear that if these were just cycle lanes then they would be too narrow at 2m. However, we are aiming for segregated cycle tracks along Oxford Road, quite separate from the road.

This states that cycle tracks should be a minimum of 2m wide, so the option of 1.5m is totally unacceptable for the Oxford Road designs.

Unfortunately Cycle-friendly Infrastructure (1996) is not available on line and Local Transport Note 2/08 October 2008 Cycle Infrastructure Design which is on line does not contain advice about cycle flows.

My conclusion is that the segregated cycle lanes on both sides of Oxford Road need to be at least 2.5m wide to cope with the cycle flows at peak time and preferably 3m where possible.

The TfGM officers did accept that it may be possible to find space for 2.5m wide lanes in some parts of Oxford Road...

We were shown 8 options for the lane/track design, sadly none of them are totally acceptable...
The first issue I raised was the question of maintenance. This was acknowledged as a problem. If the measures were made from breakable materials then there would have to be ongoing replacement. The 8 options were:-

This is just a cycle lane with 0.7m of hatching between it and the bus lane. It offers no segregation from buses and taxis. Taxi drivers are very likely to drive into the cycle lane to collect and drop off passengers. This option is simply not what was offered in the consultation and is totally unacceptable. 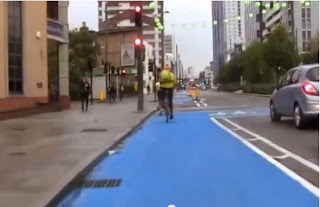 These plastic bollards are a great way to quickly and cheaply convert an entire traffic lane into a cycle route. They have been used in parts of the USA to relocate road space to cycling. However, they are easily broken by motor vehicles, as they rapidly discovered on the NW Lovejoy Ramp in Portland. 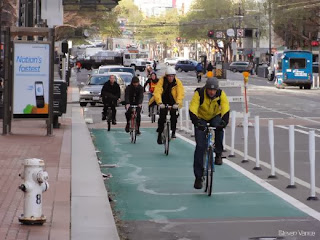 There is also the problem that they are very ugly. If these were installed on Oxford road en-mass it would not be long before there was a campaign to get rid of them, and we would be pushed back into unsegregated cycle lanes.

The armadillos are a new product from Spain that has not been in use for long so there is little evidence of their impact. 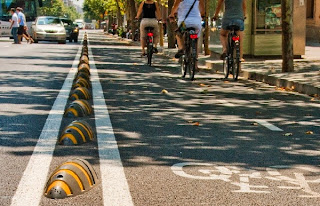 They are low plastic humps which would not prevent a bus or taxi entering the cycle lane and will provide very little feeling of separation for those on bikes. It is made from recycled plastic which means they are likely to be damaged and degrade over time.

They are also pretty ugly and easily removed.

Many of us at the meeting think that they may also be unsafe, particularly when placed at an angle to the cycle lane. Some free samples have been sent over which are going to be tested in Salford along Liverpool Street/Middlewood Street, so we will get a chance to see them.

This is the approach taken by Camden in Royal College Street. 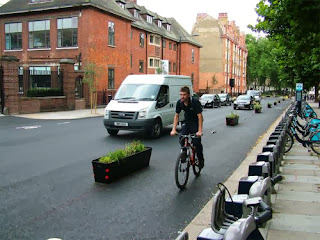 Photo by The Alternative Department for Transport

It is a real dog's breakfast, whilst the planters may provide the feeling of separation they are a real safety hazard and maintenance problem. The planters are big solid objects with sharp edges which will do serious damage to anyone on a bike who runs into them. As for maintenance, is anyone going to look after the plants and remove all the rubbish that gets thrown in? Very unlikely.

This is just a combination of option 2 and option 4 with the combined problems of both. Just dreadful.

This is a UK-style segregated cycle track, as you can already find along Hulme Hall Lane & Alan Turing Way in Manchester. 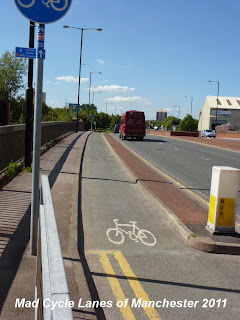 The big problems with this design is the height of the curbs on the sides of the cycle track make the rider feel hemmed in and reduce the useful width of the track. You wouldn't want to catch a pedal on those full-height curbs.

Also, even a full height curb wouldn't prevent a determined driver from getting onto the cycle track, but it is at least clear from the design that this is a separated part of the highway. 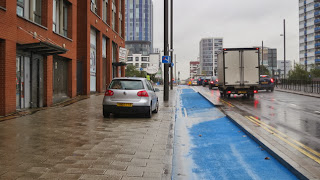 This combines the above with the plastic bollards. It helps reduce encroachment from drivers, but would look pretty ugly.

This is the most visually attractive option, and the only true, "Dutch Style" option on offer. 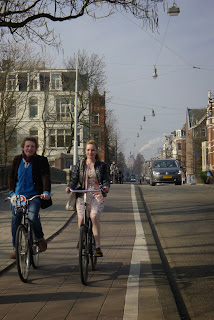 However, in the context of a main road like Oxford Road this is not the approach you see in the Netherlands, because it can easily be invaded by motor vehicles, and would be extensively used by taxis to drop off and pick up passengers. 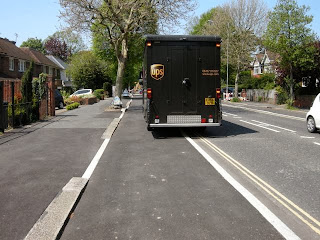 Old Shoreham Road cycle track,
photo from As Easy As Riding A Bike.

How it should be done...

One Dutch approach in this sort of context is to put a raised curb between the cycle track and the road. 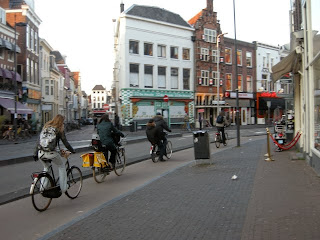 Photo from As Easy As Riding A Bike.

This has the advantage of the raised curb in increasing segregation and meaning that the cycle track itself has only shallow, sloped curbs, making the full width of the track usable for cycles and reducing the feeling of enclosure.

This was the approach that I suggested durring the meeting and TfGM and MCC officers were receptive to the idea.

This is how it should really be done.

The most common approach to busy wide main roads and cycle tracks in Amsterdam is to place the street furniture (trees, lamp posts road signs etc) between the cycle track and the road. 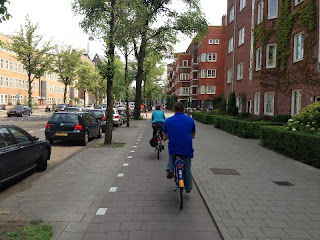 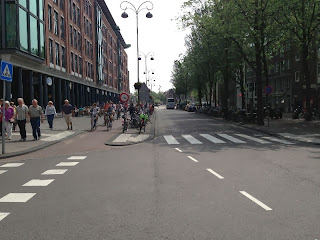 Photos from Sustainable Transportation in the Netherlands

This provides a complete separation between the motor traffic and pedestrians and bikes. This approach also creates a calmer streetscape for people and the separation is enforced bt street furniture which would otherwise clutter up the pavement.

I am sure that this approach would create a far more attractive and safer environment on Oxford Road than any of the options currently on offer.

This image of Vassar Street - Cambridge MA shows a cycle scheme in the USA which uses the same approach in a context that looks similar to Oxford Road. 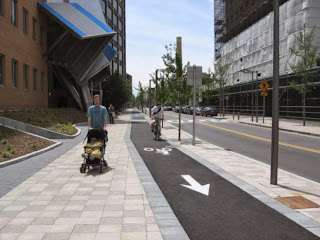 I hope we can persuade TfGM, Manchester City Council, Corridor Manchester, the Universities and some cycle campaigners that this approach is the best solution for Oxford Road.