A letter by cyclist Rob Cole in the Camden New Journal provides worrying new evidence of he failure of armadillos and planters in Royal College Street, Camden after less than 6 months in place. 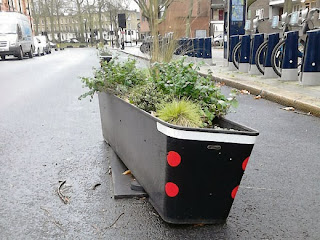 Photo by Rob Cole via the Camden New Journal

In the letter Rob Cole says he has "been saddened to see how quickly motor vehicles have ruined this new lay-out."
He has documented:-

He also reports that "As a cyclist I have had a number of near-collisions on the southbound lane in the past few months as this new design hosts car parking, with motorists and couriers with packages rapidly decanting into the cycle lane without checking for oncoming cyclists. I have also seen other cyclists have too many near-misses, despite travelling at safe speeds and using bells."

So, neither the armadillos nor the planters have lasted 6 months without damage. Vehicles can clearly breach the line of armadillos and block the cycle lane, so they offer limited protection against motor vehicles.

Clearly neither planters nor armadillos are suitable for a major, permanent scheme like Oxford Road.