This Saturday's MEN carried a story that underlines just how far off the plot Manchester is when it comes to cycling. The item, titled "Underground bike park to open as part of bid to make Manchester the ‘commuter cycling capital of Britain’" gives details of a new £500,000 cycle hub in the centre of Manchester. Now, half a million pounds being spent on cycling in the city centre sounds like good news. Money like that could make a big difference.... 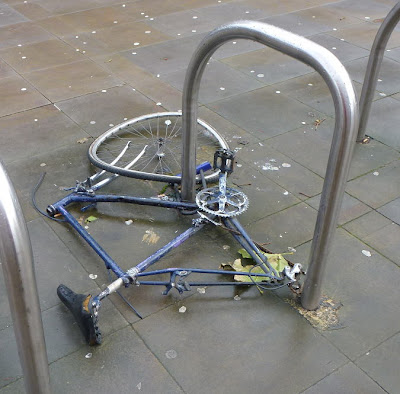 However, this £500,000 has been spent on providing cycle parking for only 200 bikes. That's an eye watering £2,500 per cycle parking space. People using this high-quality facility will have to pay £100 or £200 a year to use it. So this is an expensive, executive cycle parking facility that will benefit a few well paid cyclists, like the city council leader, but make very little difference to the number of people cycling in Manchester.

A source tells me that by mid December this very expensive facility (which has been extensively marketed) had only attracted 36 members. That would work out at over £10,000 per cycle parking space!