This week details were anounced for the Manchester Day Parade.

The theme this year is ‘Going Global!’.

The deadline for applications is Friday 31st January.

This year there is going to be one important change. After participating last year, several of us felt that the parade ended too quietly, there was no carnival or party to wind down at. Well next year that will change. The organisers, Walk the Plank are aiming to transform some of Manchester’s city squares into "mega parties of amazing décor, mounthwatering food and drink and vibrant performance" as well the parade.. 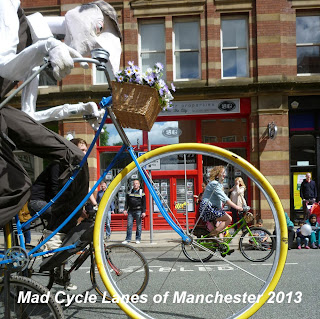 The idea behind the theme of 2014 is to reflect Manchester’s position as a world leader and how the city and its people connect with the world.

We need to remember that priority will be given to groups with exciting creative ideas, groups who can demonstrate both a commitment in time* and the capacity and enthusiasm to deliver a quality project and groups who are able to bring some funding or resources to Manchester Day.

A couple of last year's participants have already expressed the idea that this year we should be in the parade and put on a pedal powered party in one of the squares. Who else thinks that would be a good idea and is prepared to put in the effort of making it happen?

If you would like to be involved then email me at mdp(at)gmx.co.uk 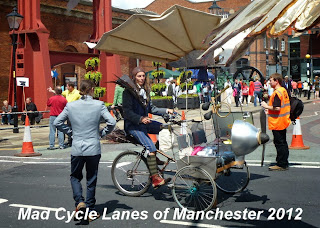