The following has been sent to cycle forum members

As discussed at the Manchester Cycle Forum meeting last week, TfGM have set a date for a workshop to discuss cycling infrastructure options as part of the Bus Priority Package. This workshop will be focused on the section from Hathersage Road into the City Centre.

The cycle forum workshop is to be held at TfGM’s office at 2 Piccadilly Place on Tuesday 14 January 2014. The workshop will start at 5pm in Room 1A.

TfGM will host the workshop with the intention being to discuss the most suitable approach for Oxford Road’s cycling infrastructure.

Please could you respond directly to Philip Haynes at TfGM to confirm your attendance, email Philip.Haynes at tfgm.com

Design options being considered by TfGM for this "On-Carriageway Segregation" :

I will add more information to this post as I find it.... sorry it's a bit of a mess at the moment, but I wanted to get the information out. The wands, appart from looking ugly are not robust against moving traffic. Shortly after the wands were installed they ended up like this; smashed up by passing traffic, so no protection at all!

The wands in this location were smashed up a second time after they were reinstalled.

So these are not at all robust and will be a maintainance problem.

The Armadillos are also made out of plastic by a Spanish company based in Barcelona. Judging by their web site the company are new to the market and have only been used in a few places. This also means their longevity is not proven. Also, as they are quite low they are no protection against a driver who wants somewhere to park.

Cycle campaigners are not happy with the way they have been used in Camden.

And neither were the Washington Area Bicyclist Association happy with the way they were installed in Pennsylvania Avenue. As for intermittant kerbs, they are no match for the determined driver either.

Brighton - Grand Avenue and The Drive

Update: think I've worked out what TfGM mean by this... 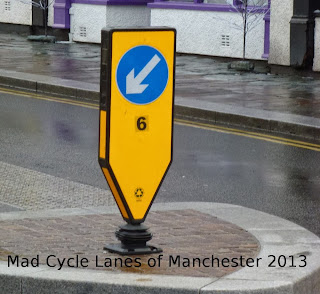 Wider than wands, possibly more robust, these will eat into the lane widths and look pretty ugly....

(and boy does Oxford Road need the drains fixing!)

(presumably this could include proper Dutch or Danish designs...)