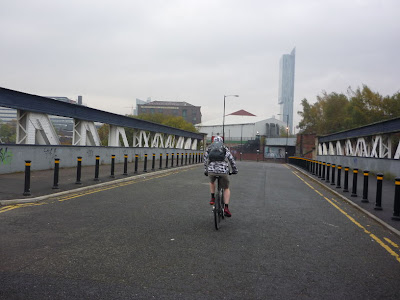 The construction of Ordsall Chord will take 2 years, with a planned start date of Winter 2014 and a completion date of Winter 2016. In order to build the Ordsall Chord structures the existing Prince’s Bridge crossing will need to be removed. Once construction is complete, a permanent replacement crossing will be provided. During construction a temporary route is required for pedestrians and cyclists. Prince’s Bridge carries a number of utilities which also need to be diverted permanently. The current plan for this is to build a dedicated utilities bridge adjacent to Castlefield Bridge.

We have considered a number of options for diversion routes, including providing a temporary dedicated crossing facility and diverting pedestrians and cyclists eastbound along Trinity Way towards Quay Street. Both of these options have had to be dismissed. Due to the location of compound sites, on either side of the River Irwell, it has not been possible to provide a direct route, that is safe and that does not conflict with construction traffic. The need to provide ramps to access and egress a temporary bridge means that any journey time savings would be minimal. The routes around the compound sites were indirect and isolated so the safety of both cyclists and pedestrians was also a concern. The eastbound diversion along Trinity Way towards Quay Street has been dismissed as during construction traffic management measures will be in place during certain periods, which may impact upon the cycle lanes and footways along the stretch of Trinity Way between Hampson Street and Irwell Street.

The only other viable diversion route is to divert cyclists along Castlefield Bridge (between Hampson St and Water St). Castlefield Bridge has good existing cycle and pedestrian infrastructure provision with footways and cycle lanes on either side of the carriageway. The key conflict points are at the Water Street / Trinity Way junction and the Hamspon Street / Trinity Way junctions. There is an area underneath the rail bridge on Trinity Way (south west of Hampson St) where space is tight. We have identified a number of options to improve safety for diverted pedestrians and cyclists. We are also looking at the option of making use of the planned new utility crossing, by provided an unsegregated shared pedestrian / cycle route on top of the crossing.

The diversion plans provide different options for how the diversion route could work with the aim of providing a safe route for both pedestrians and cyclists. Any comments would be greatly appreciated.

If you wish to make any comments on the proposals for the *cycle route diversions* please send them to James Shanks at Parsons Brinckerhoff shanksja@pbworld.com before Saturday 25th May.

For anyone going down the Irwell path it will be easier and quicker to cross the river on the A57 Regent Road and go down the steps.