Last Tuesday, 20th November, I took the day off work to attend the Love Cycling Go Dutch Conference in Manchester. It was the last of four such conferences organised by the Netherlands Business Support Office and the Embassy of the Kingdom of the Netherlands. The conference was aimed, primarily at council officers and other professionals involved in cycling, but I was fortunate enough to have received an invitation as a local cycle campaigner.

It is worth noting that there was a very significant commercial interest in this for the Netherlands. They are looking to sell their expertise in cycling and cycle provision around the world. However, their approach was not the hard sell you might expect. It didn't need to be. Dutch and UK speakers simply laid out the massive benefits of cycling to their economy, and their people and how it has been achieved. The results speak for themselves. It isn't just about Dutch cycle infrastructure, it is a complete package which has taken many years to get right, and they are still making improvements. The most amasing message of the day is that the Dutch still want to increase levels of cycling in the Netherlands.

The day was chaired by Philip Darnton, President of Cyclenation who did a good job of keeping every one to time. The conference kicked off with a welcome from the deputy Dutch ambassador before diving straight into a session on the costs and benefits of cycling.

Kees van Ommeren from consultants Decisio went though some impressive case studies of the way social cost benefits can justify expensive cycle infrastructure, justifying a new bridge project and demonstrating the folly of charging for cycle parking in Utrecht. Nick Carvill then followed on with a stunning presentation on the massive cost benefits of cycling in the area of health. His presentation contains some really impressive reference to research showing how much more effective cycling is as a treatment for health conditions than drugs like statins. His presentation starts with some photos of people cycling and asked where we thought the photos were taken, his comment to one dressed in HiViz, helmet and helmet camera was, he's not going cycling, he's going into battle! 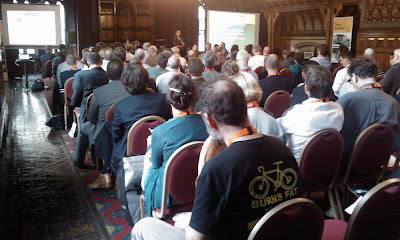 The second session was a review of the previous day's workshop presented by Marjolein de Lange where Manchester planners and and Dutch experts had reviewed two locations in Manchester. The first part was a rather disappointing review of the mess of half-baked segregated cycle tracks around the A56 Chester Road roundabout. The Dutch team didn't suggest anything more than minor changes where local residents knows the area well can see that the road needs narrowing further to reduce traffic flows heading for Deansgate. However, the second example was far more exciting. The team had looked at the opportunities for improving the dreadful situation on Wilmslow Road, otherwise known as Curry Mile. Here the Dutch team came up with a stunning solution which separates the buses from cycles completely and removes all the on-street parking. During the break for coffee, I found the councillor who's ward includes Curry Mile talking enthusiastically about how good this plan would be for the area and how it would fit in well with the wishes of the local traders. With the planned improvements to cycling in the Bus Priority on Oxford Road to the north there is a possibility that something very significant is achievable here.

Next up was Vim Bot of the Dutch Cycling Union who started his presentation with a video...

I like Vim, amongst the tall Dutchmen he was the shorter man. A cycle campaigner, like myself he was less of a sales pitch for the infrastructure and consultancy and more the man who talked about the ethics and culture of the Netherlands and how cycling fits in with all of that.

Partnering Vim was the wonderful John Whitelegg. A former Green Party councillor in Lancaster who has now given up politics he opened his presentation with a slide titled "202020". I am a huge fan of John Whitelegg, I have followed his work on & off over the past quarter of a century, but he still doesn't fail to inspire. His opening message was that there is no reason why Manchester, or any other city for that matter, cannot achieve a 20% modal share for cycling by 2020. This was a stunning challenge to the officers and politicians from Manchester City Council and Transport for Greater Manchester who were sitting in the audience. He commented that choices have to be made about the quality of life in our cities and that we have not created civilised public spaces, even in York. This change requires a great deal of restraint on the car, the enforcement of speed limits and the removal of parking. His talk was followed by questions to a panel which just served to highlight how far Manchester is from providing adequate facilities for cycling.

The afternoon was divided up into Workshop sessions, some of which ran twice

I attended both of Vim Bot's sessions, but also found, by accident, that Adrian Lord had used a couple of my photographs for his slide presentations and recommended this blog in his presentation. It is nice to find that I have been influential in such a high powered cycling conference.