First Letter in the MEN

Not my headline - makes you wonder if they understood the letter - still first letter in the MEN at the first attempt. 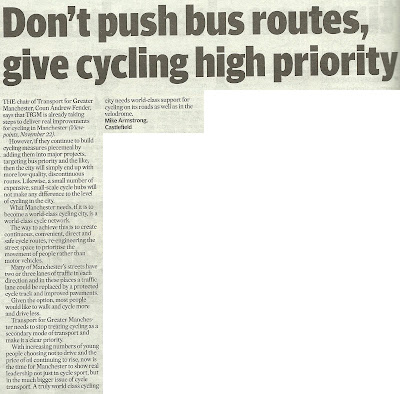 Cllr Fender says that TfGM is already taking steps to deliver real improvements for cycling in Manchester. However, if they continue to build cycling measures in piecemeal by adding it into major projects targeting bus priority and the like then the city will simply end up with yet more low quality discontinuous routes. Likewise, a small number of expensive, small scale cycle hubs will not make any difference to the level of cycling in the city.

What Manchester needs, if it is to become a world class cycling city, is a world class cycle network. The way to achieve this is to create a continuous, convenient, direct and safe cycle routes, re-engineering the street space to prioritise the movement of people rather than motor vehicles. Many of Manchester's streets have two or three lanes of traffic in each direction and in these places a traffic lane could be replaced by a protected cycle track and improved pavements.

As Prof John Whitelegg said at this week's Dutch cycling conference in Manchester. There is no reason why Manchester could not achieve a 20% modal share for cycling by 2020. Such a change would transform our city, reducing traffic congestion and air pollution whilst improving peoples' health and the city's economic prospects. Given the option, most people would like to walk and cycle more and drive less.

Transport for Greater Manchester needs to stop treating cycling as a secondary mode of transport and make it a clear priority. They can make an immediate start by implementing a major cycle route to Dutch standards alongside the bus priority scheme on Oxford Road and continue it south into Rusholme and Fallowfield along the notoriously difficult Wilmslow Road. At the same time they need to plan a strategic network of cycle routes, and build it into all their schemes as a priority. The network needs to be backed up with sufficiently high levels of secure cycle parking and go where people want to travel.

With increasing numbers of young people choosing not to drive and the price of oil continuing to rise, now is the time for Manchester to show real leadership not just in cycle sport, but in the much bigger issue of cycle transport. A truly world class cycling city needs world class support for cycling on its roads as well as in the velodrome.