Starting at the junction with the A576, this is Great Clowes Street in Salford. This is the start of a new set of cycle infrastructure, and it leaves a lot to be desired... 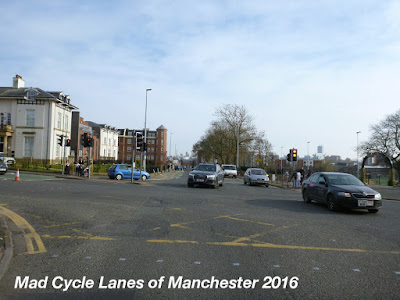 The cycle lane has only just started when it runs straight into a bus stop. 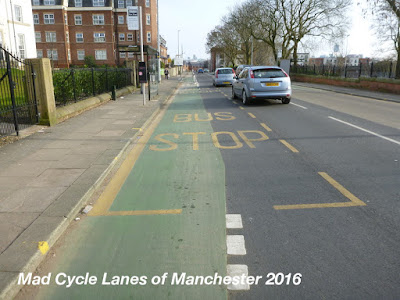 Next there is a plastic island with two plastic bollards. Note how the island is entirely in the cycle lane, not even on the white line. This makes the cycle lane feel crowded and, quite frankly threatening. 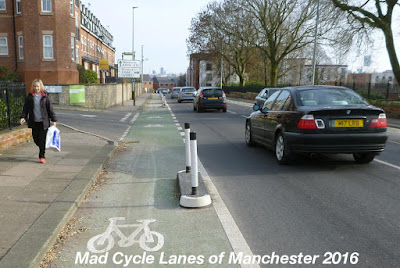 Next there are the armadillos - these useless items are a method of dumping waste plastic from Spain on the UK's roads. Note how these are placed well into the cycle lane rather than on the white line as was the case with the original trial on Middlewood Street and Liverpool Street. 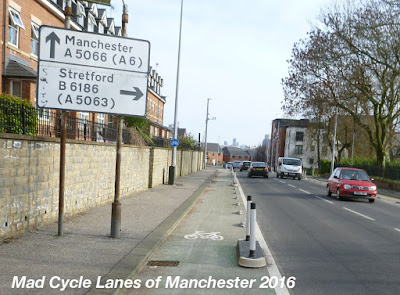 These plastic lumps make cycling along this route very uncomfortable. 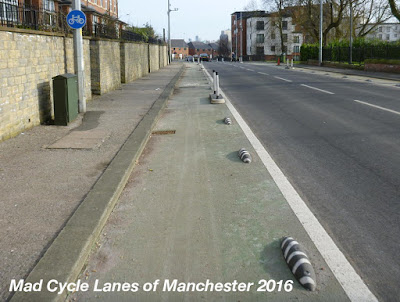 You quite quickly feel trapped between the armadillos which, because of their shape, could easily throw you into the road and the rubbish which is strewn in the cycle lane. 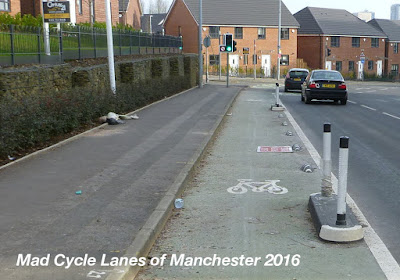 At the junction with Upper Camp Street, all the plastic falls away and the junction is totally exposed to oncoming traffic. 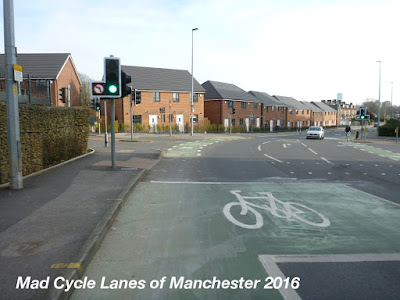 Beyond the junction the dirty, un-swept cycle route feels neglected and horrible. 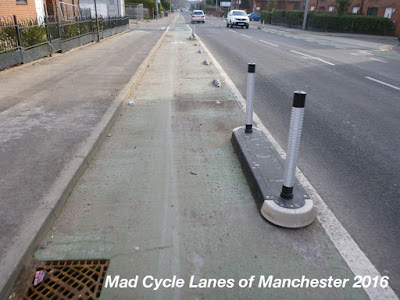 At the junctions there is no protection. All the cars I saw emerging from side lanes blocked the cycle lane. Notice how this cycle lane then crashes into a bus stop. 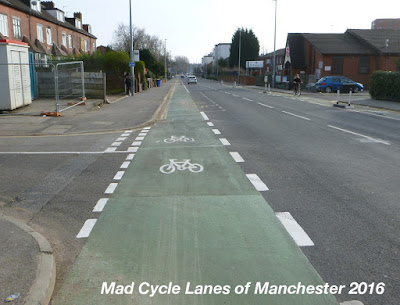 In any location where there is a bus stop or a junction there is no physical protection whatsoever.

In other words, when it gets difficult and dangerous, you are on your own. 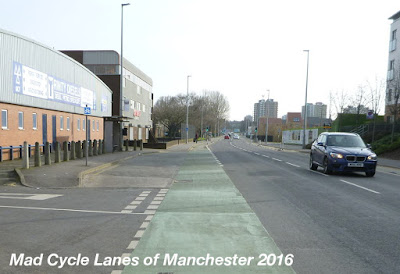 This bus stop show just how sharply a bus must swerve across the cycle lane to get into the bus stop. 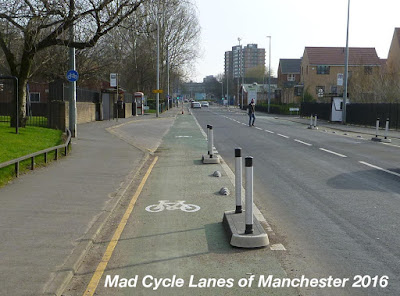 Further along, this traffic cone, left in the middle of the cycle lane, demonstrates just how much Salford council really care about people cycling. 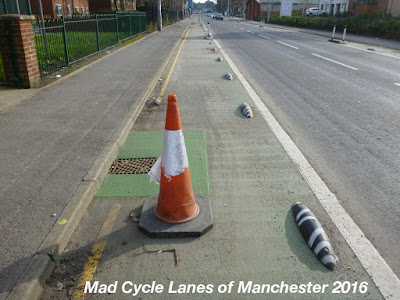 This area is strewn with broken glass and broken pieces of traffic cones. 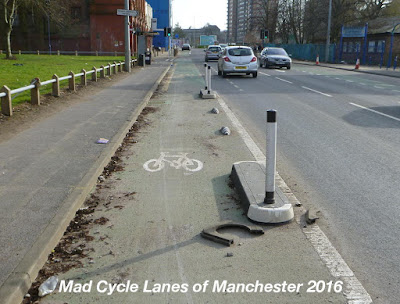 And then we find the cycle lane blocked by a car... 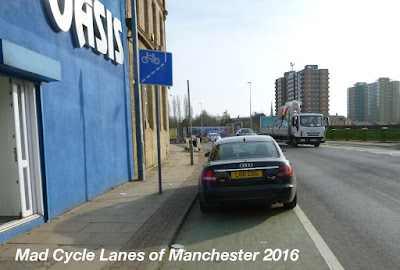 Almost parked right up against the next set of bollards this car IS PARKED LEGALLY!

There are no double yellow lines... 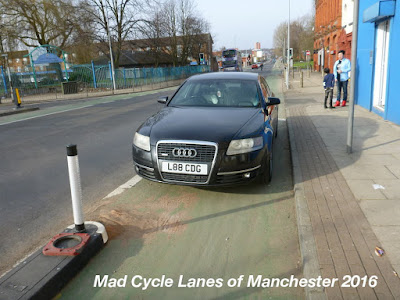 On Broughton Bridge you approach the carnage of broken plastic... 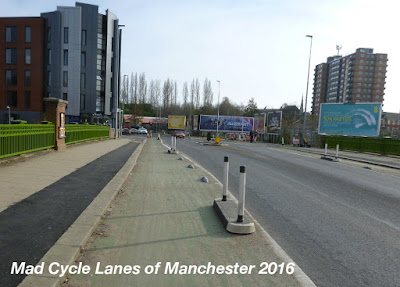 Here traffic cones mark the locations where vehicles have smashed up the bollards, here one has been destroyed, 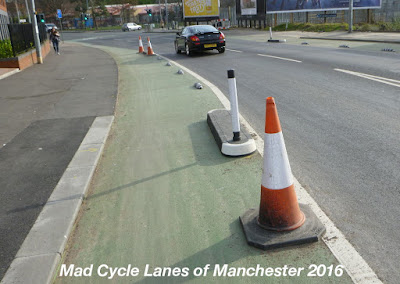 next both have disappeared. 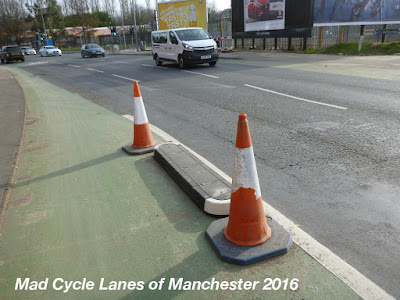 As you move onto Blackfriars road there are more 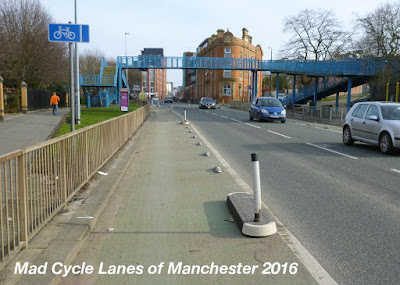 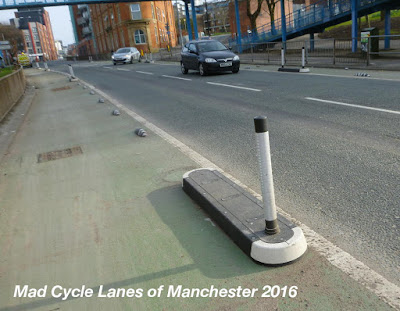 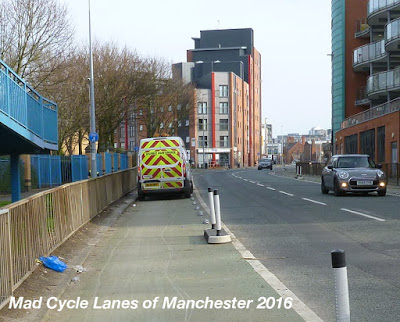 provided by a "HIGHWAYS MAINTENANCE" driver who was fitting something to a nearby lamppost. 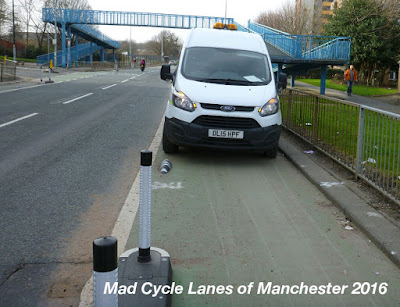 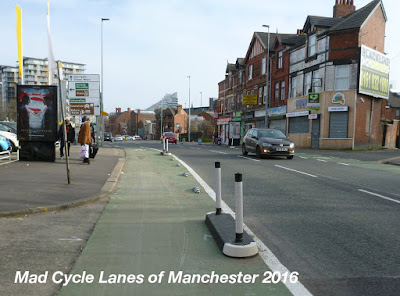 you are thrown into this expanse of tarmac as you approach Trinity Way. 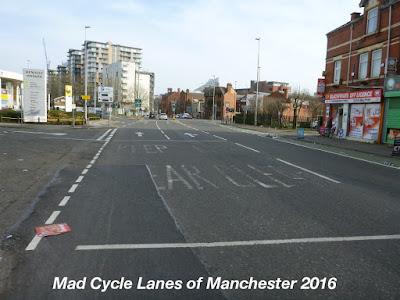 After Trinity way there is a short burst of green paint 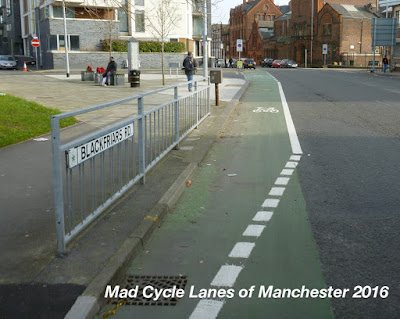 before the cycle lane turns into car parking spaces and charging points for electric cars. 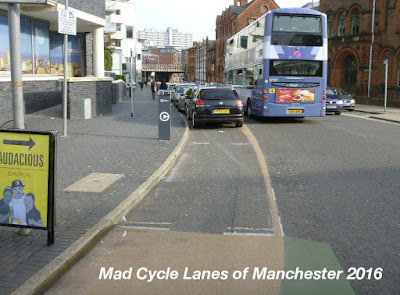 Quite why this stretch is given over to parking is something only Salford Council can answer, 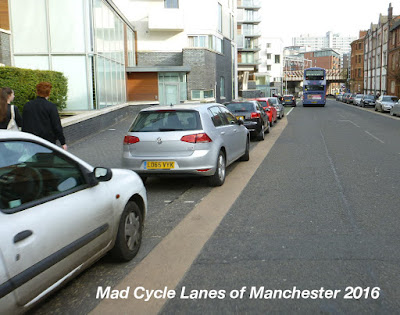 and at the end of it there was yet another car blocking the cycle lane. 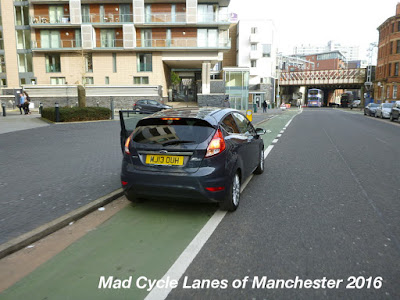 At the junction with Viaduct Street there are lots of cones and road signs in the cycle lane. 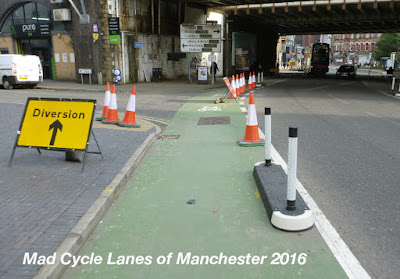 Finally the cycle route ends in this bus stop. 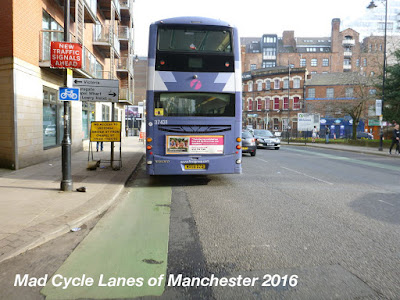 The rest of the route into Manchester City Centre is just road.

Quite frankly this is horrible nasty, dirty and neglected.