I haven't been down Wilmslow Road for a few months, so I wasn't aware of the level of progress that is being made on the Curry Mile. The plans for this route were a real mixed bag. It was good that the council were aiming for proper cycle tracks, but the design completely failed to address the issue of safety at junctions.

The section southbound from Rusholme Place is sort of open, so here's a quick preview of what it looks like so far...

The first thing you notice is the way the cycle track abruptly moves from the cycle lane across the junction, left to go behind the parking spaces. 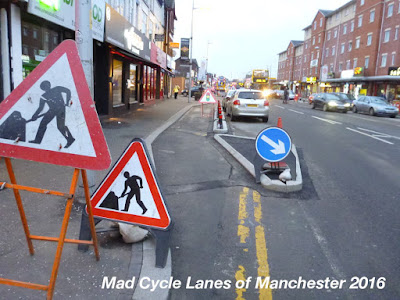 The second problem is the attitude of the contractors who see no problem with dumping traffic signs in the cycle track, on the wrong side of the parked cars where no diver can see them. 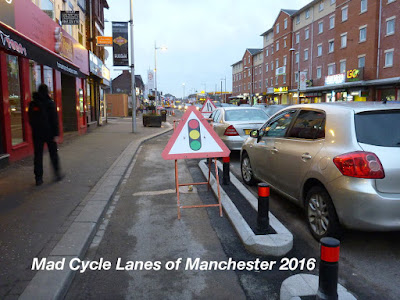 At the junction with Banff Road you clearly see a problem with the way the kerbing is cut back to allow vehicles to swing round the corner into the path of cyclists. I suspect this will be a significant problem along much of this route. Drivers are invited into the junction by its shape rather than feeling that they are intruding, as would be the case if they were presented with a raised kerb to cross. 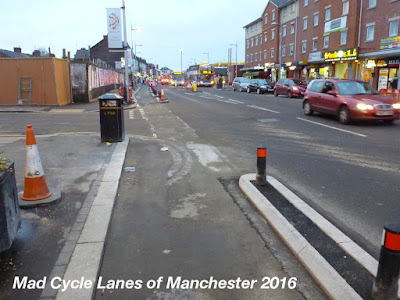 Past Banff Road you can see how somebody has responded positively to our concerns about people parking on the cycle track by putting in this continual row of half-height bollards (sadly only plastic). The nice thing is that they add a feeling of continuity and they help visually distinguish the cycle track from the pavement. 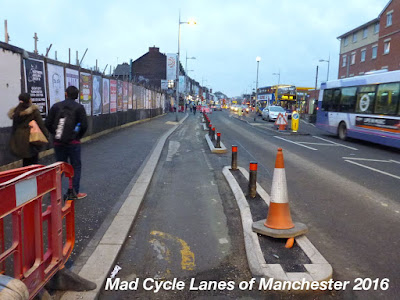 However, some of the larger gaps in the kerbing will provide the opportunity for drivers to get onto the cycle track and pavement. Stand by for lots of photos of taxis, vans & cars blocking places like this. 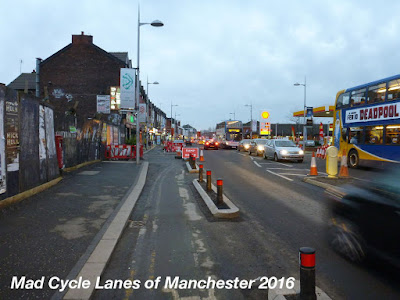 Further along there is another sudden lurch to the left and a narrowing of the track. 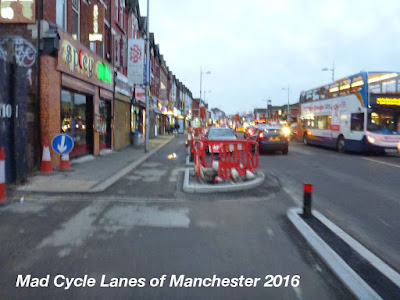 The track is already attracting people to cycle along it, and I saw very few people walking along it. 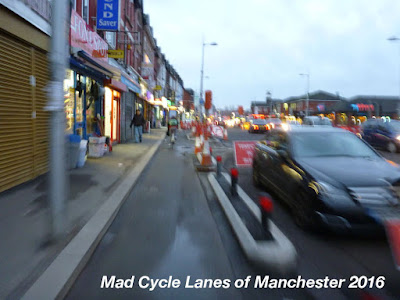 At the junction with Great Western Street the pavement has been sacrificed to allow two lanes of traffic at the junction and this phone box allows clear comparison with the original pavement, as well as causing another nasty kink in the cycle track. The cycle track is also very narrow in places, which makes me wonder how trikes will manage along here... 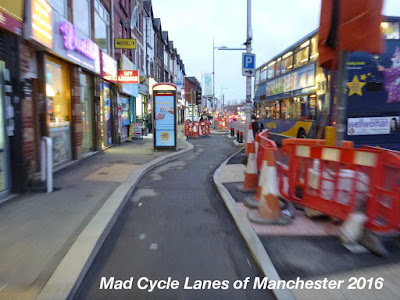 At the junction itself they have yet to sort out the traffic light too. 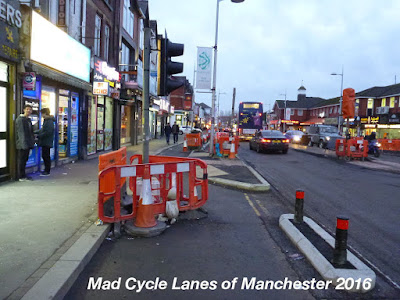 In general, the design has sacrificed pavement width to provide space for additional traffic lanes and unnecessary car parking. 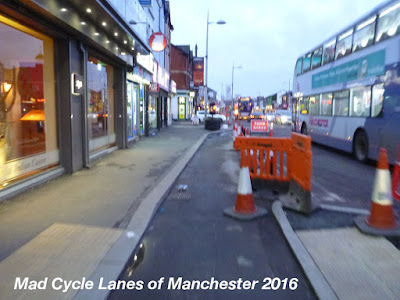 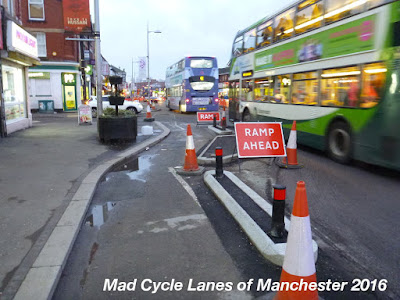 followed by an unprotected junction and another nasty kink back to the left afterwards. 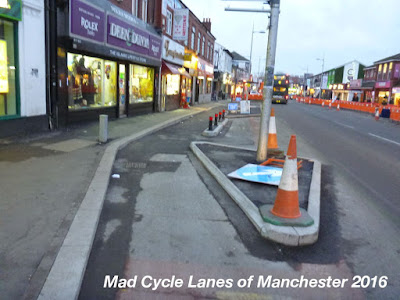 The open section of track currently ends at Denson Street. Here you can see another potential problem with the design. The drains are all in the cycle track, so it is, for the most part lower than the rest of the road surface. This means it is likely to end up blighted by puddles and the surface will degrade quickly in the winter. 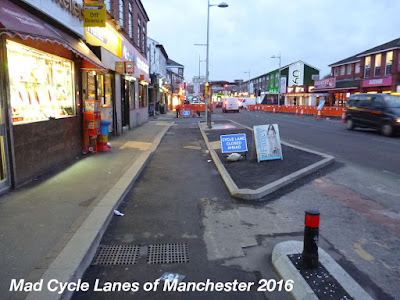 Here there is another unprotected junction. You currently have to get out onto the road and compete with the buses for space. 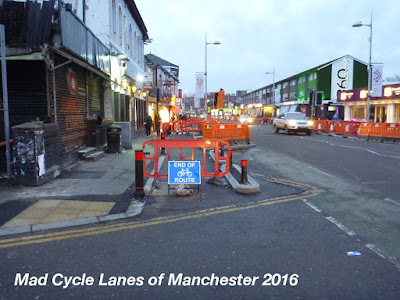 However, it may not be long till the next section is open. Here there are also full height bollards designating the edge of the pavement, not quite sure why. 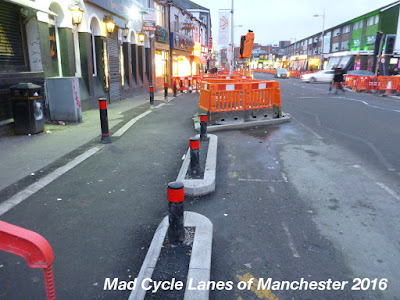 All in all, the route looks like it will be a big improvement over the useless cycle lanes which slalomed round the bus stops, and left you fighting with buses cars and taxis for space. The main safety problem along here was caused by the bus stops and parking movements.

However, the poor design of the junctions poses a safety issue, and many are likely to come a cropper with the sudden changes in direction. I expect this route will see an increase in the level of cycling, but little change in the number of incidents. Time will tell.

Ultimately, there may be an even bigger danger resulting from this scheme. Bus drivers seem to be getting more aggressive towards people cycling along Wilmslow Road. Some now seem to think that anyone not in a cycle track is fair game, and I was cut up by a bus near Platt Fields Park and then shouted at for not using the tiny section of cycle track at that point. I suspect we may see much more of this kind of behavior in the near future as there is a history of similar behavior in Manchester. 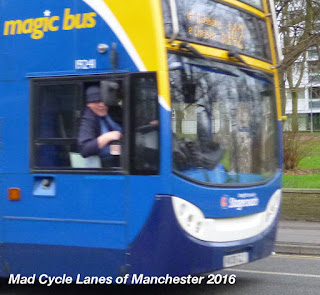