The Bridgewater Way - MediaCity to Brooklands

Ok, so this doesn't look like a good start, but stay with me it gets much better. Leave MediaCity Plaza via the swing bridge and go through the Imperial War Museum car park. 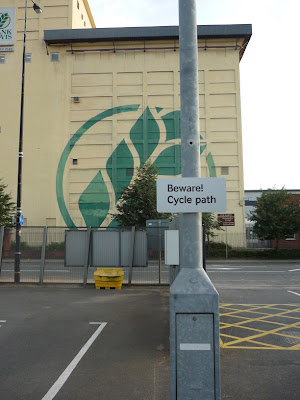 Turn right onto the road, and then first left into Warren Bruce Road. 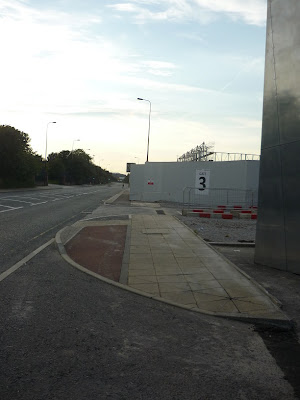 Then as you cross the roundabout and into Europa Way.

There are a load of poor quality segregated cycle paths on the pavement here, but I've never seen anyone cycle on them, every bike I've seen has been on the road. 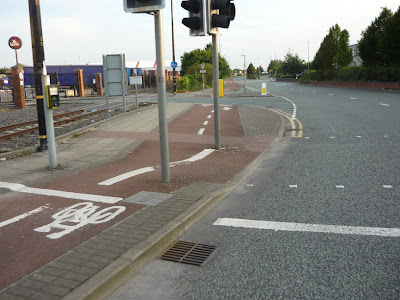 At the next roundabout keep straight on and head for the Kelloggs sign.

At this point there is an unsignposted left turn onto an unsigned cycle route. 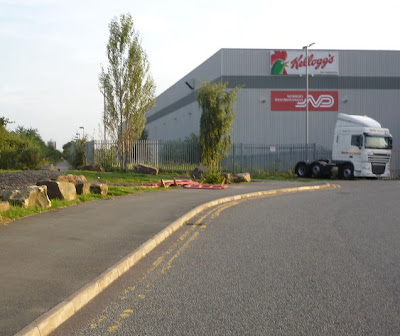 It is marked on the cycling maps, so it isn't a footpath. Follow the path round to the right. 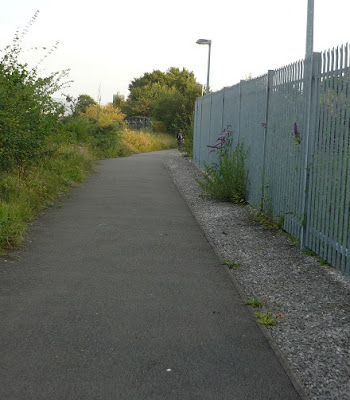 And you will emerge out onto the end of Moss Road. 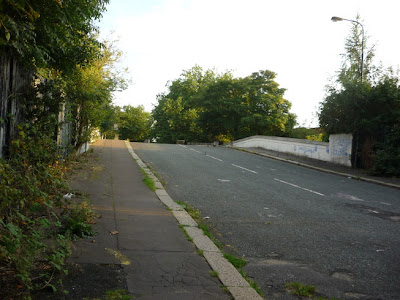 A little further down there is a signposted left turn onto the Bridgewater Way. Thankfully the stupid barrier has been bypassed by the removal of the original gate. 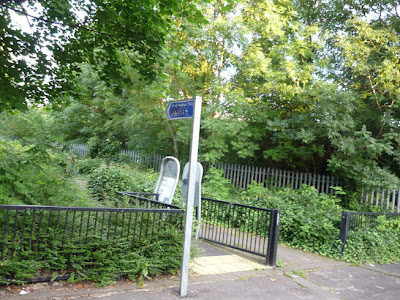 After a short way down a narrow tarmaced path you emerge to see this sculpture. 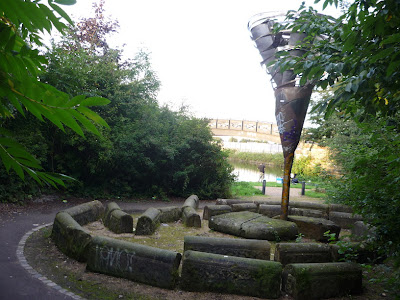 Now turn sharp right onto the canal tow path. The surface is fairly well finished in an attractive light stone. This location links with this new post Bridgewater Way, Mosley Rd to Europa Gate via Watersmeet. 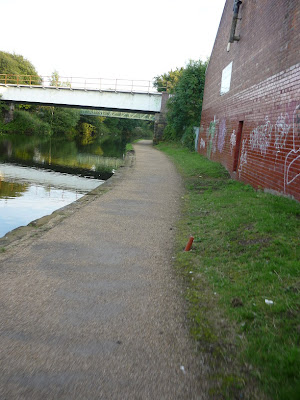 It undulated somewhat, so you can't comfortably ride very fast, but that is probably a good thing as it makes you take your time and enjoy the views. A little further along the path takes a detour around the marina. 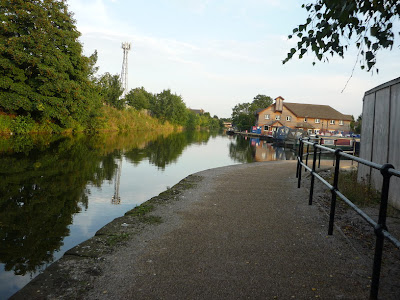 There are a number of tight bridges on the route, but none of them are in any way dangerous. 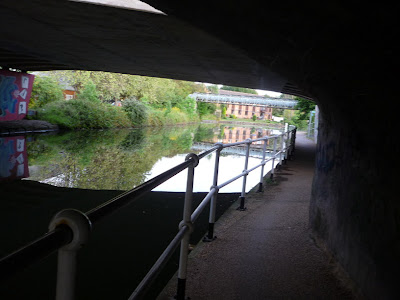 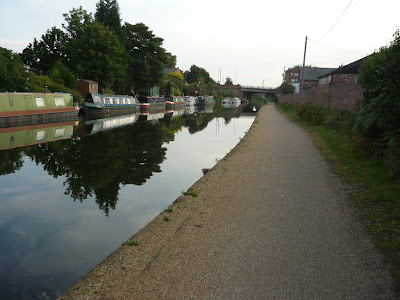 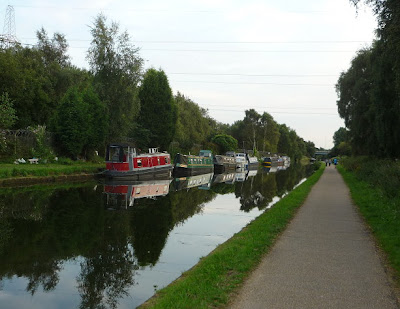 However, the path deteriorates significantly as you cross the River Mersey. The bridge is unsurfaced... 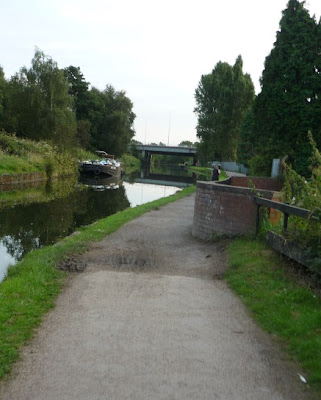 ...and the path suddenly turns into a road, complete with cars. This is the access route to an animal sanctuary. 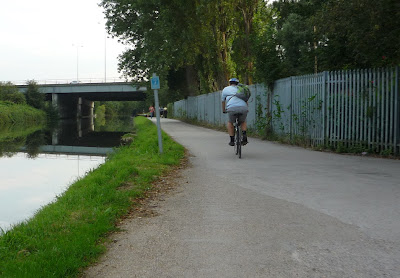 The surface is very poor in places, but as the road turns right you can fork onto the towpath. 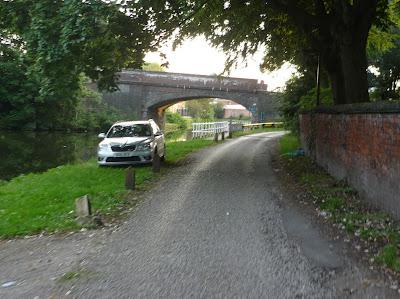 This takes you past the Bridge Inn, 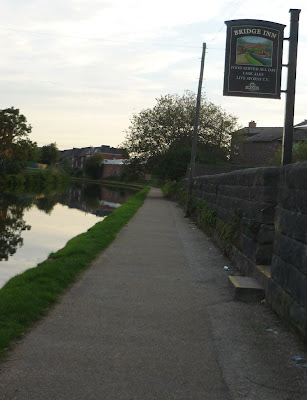 and down to Sale. 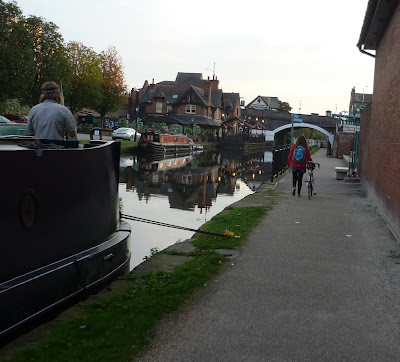 Watch out for the one interesting piece of industrial archeology. 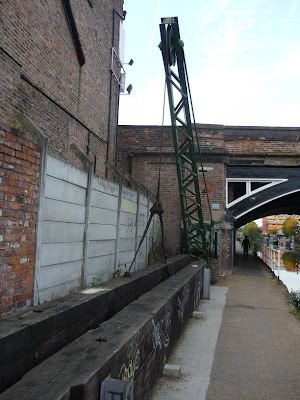 Then, just before you reach Brooklands and the end of the path, the high quality cycle path suddenly turns into an idiotic obstacle course. This has been done just because a gate from a school opens out onto the path, but it probably breaches the equalities act and pisses off most of the path users. 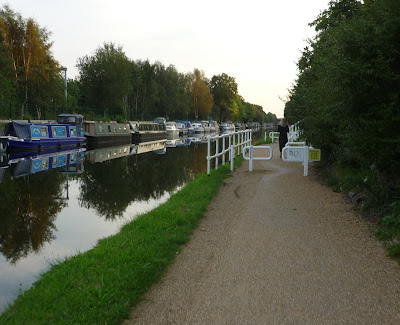 There is one last short stretch of residential moorings, 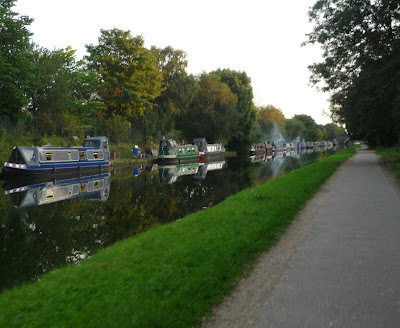 before bikes are directed off the canal path. 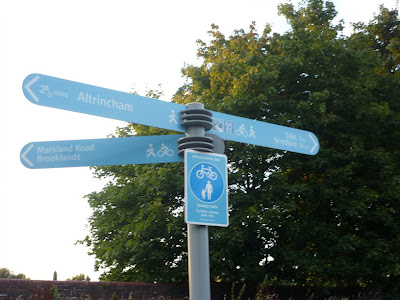 From here on the surface of the path degrades severely, 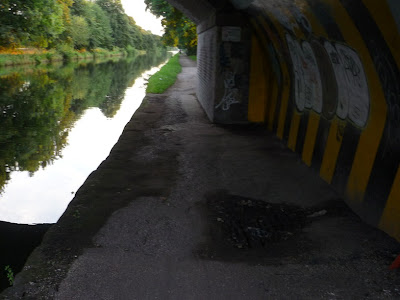 as does the attitude of the signage. 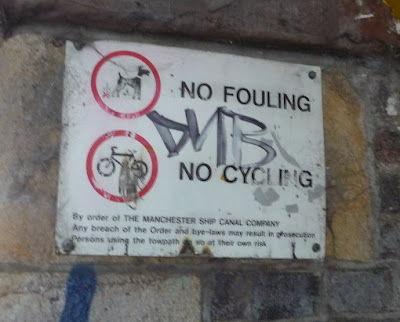 So there you have one of Greater Manchester's best cycle routes. It is used by many people from South Manchester and Trafford who work at MediaCity, not least because the Tram service is pretty dreadful. It is such a shame that it is spoilt by one set of discriminatory barriers that make it unusable for tandems and trikes.

View MCUK to Brooklands in a larger map

And the latest news is that £1.5 million of funding has been granted to deliver the next three phases of the Bridgewater Way. The grant, from the Department for Transport's Local Sustainable Transport Fund, will pay for upgrades to another five miles of the Trafford towpath and a number of improvements to access points and routes to the canal over the next couple of years. This will include sections between Brooklands and Broadheath, through Trafford Park and to Manchester United.

Let's just hope that there are no more silly barriers and that they don't waste any more money on Cyclists Dismount signs.
at 20:46